Just over 40 years ago, an Argentinian by the name of Jorge Mario Bergoglio, who would one day become Pope Francis, came to Dublin to learn English. 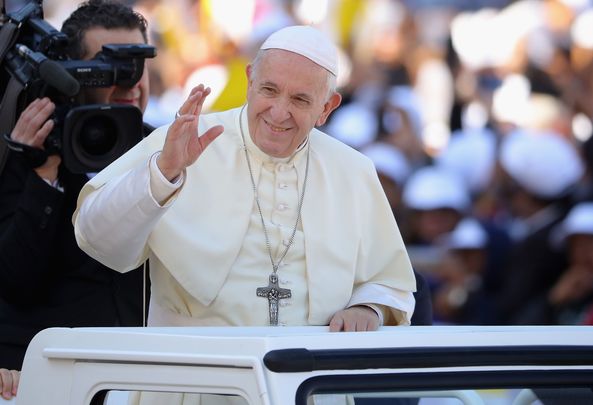 Did you know Pope Francis once lived in Dublin? Getty

Bergoglio arrived to Ireland in January 1980, during the bleak Haughey-era economic recession. At the time, he had just completed a seven-year stint as head of the Jesuit order in Argentina.

The unassuming South American moved into the leafy suburbs of Dublin 6, worlds away from his native Buenos Aires. He had landed on Irish shores to attend the Jesuit Centre in the Milltown Institute keen to immerse himself in a language course with a local teacher. He wasn’t alone - Jesuit students would flock from all over the world to attend the prestigious college of philosophy.

Then 43-years-old, Bergoglio mainly kept to himself during his three-month stay, but certainly busied himself learning the language while still making an impression on peers and colleagues.

A 1980 edition of the Jesuit Bulletin, the Irish Province News, notes that among the "constant stream of visitors who found hospitality with us we may mention Fr Jorge Bergoglio, ex Provincial of Argentina and Rector of our Theologate in Buenos Aires".  An old ledger also proves that he borrowed £14 from the bursar to buy tapes to aid his studies.

Fr Conall O'Cuinn SJ, rector of the Milltown community, which is the biggest Jesuit house in Ireland was one of the first to discover the new pope had once stayed among them.

"When we found out he had stayed here with us, we were very excited," he previously told the Irish Independent.

"To learn we had the first Jesuit pope was a wonderful surprise for all of us, but to know that he ate in the same dining hall where we eat our meals and slept within these walls, makes it all the more special.

"We are hoping that if he comes to Ireland, he will drop in to see us again and maybe even stay in his old room."

"What is likely is that his room would have had wonderful views over the city or the Dublin Mountains, which he might have found inspiring being a man who loves nature," says Rev Fergus O'Donoghue SJ.

"He was on a sabbatical when he came to Ireland so it was an ideal place for him. He had left Argentina after a traumatic time and would have been recovering from that. There are long walks right through the grounds of Gonzaga College and Milltown Park which he would have enjoyed.

"Milltown was a community in transition at the time. It had been built as a house for young Jesuits to study in and there would have been a lot of lay students, men and woman, coming and going, studying theology. He would have appreciated that the lifestyle was very simple."

Gardaí have already expressed concern about the huge crowd numbers anticipated in the Phoenix Park during the Pope’s trip - estimating that as many as 650,000 will travel to the Dublin city park to celebrate mass with the Pope on August 26.