Irish man Patrick Cleburne, who became a Major-General in the Confedertate States Army, is remembered in Texas, Alabama, and Arkansas. 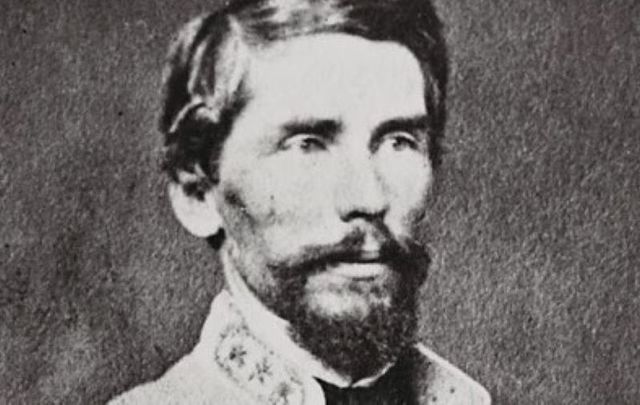 There is only one Irishman with a city and two counties named after him in American history.

Patrick Cleburne, who was born in County Cork and went on to become a Major-General in the Confederate States Army, has a city in Texas and two counties in Alabama and Arkansas named after him.

The Irish immigrant, the son of a doctor who failed his own medical exams and was so ashamed he ran away to join the British Army, went on to be a confederate hero.

“The story of his life should be a movie,” said expert Janet Baber, speaking to Laura Camper at the Anniston Star newspaper. “He was such a role model.”

Cleburne was killed during the Battle of Franklin on November 30, 1864. General (Robert E.) Lee called him "a meteor shining brightly in a cloudy sky."

Cleburne commanded three Alabama regiments, the 16th, 33rd, and 45th, and was engaged to Susan Tarleton when he died in battle.

Born in Ovens County Cork, Ireland, Cleburne was orphaned at 15 served in the 41st Regiment of Foot, a Welsh regiment of the British Army, after failing to gain entrance into Trinity College of Medicine in 1846. He grew to hate British oppression in Ireland in the wake of the Famine.

He emigrated to the United States three years later and settled in Alabama where he worked as a pharmacist. At the beginning of the Civil War, Cleburne sided with the Confederate States.

He rose from private to general. He distinguished himself, especially at the Battle of Stones River and the Battle of Ringgold Gap. His strategic ability gained him the nickname "Stonewall of the West.”

Cleburne was a man ahead of his time in the south on slavery. Before his death, he presented a proposal that slaves be enlisted and armed to fight for their freedom.

“It is our most vulnerable point, a continued embarrassment, and in some respects an insidious weakness,” Cleburne wrote of slavery in his proposal.

Cleburne didn’t fight the war to protect slavery, Baber told the Aniston Star. He fought in the war because as an Irish citizen he understood what it was to be oppressed by a government, she said.