Dr. Simon Topping, an associate professor of United States history at the University of Plymouth, has released a groundbreaking new book to coincide with the 80th anniversary of the arrival of US troops in Northern Ireland. 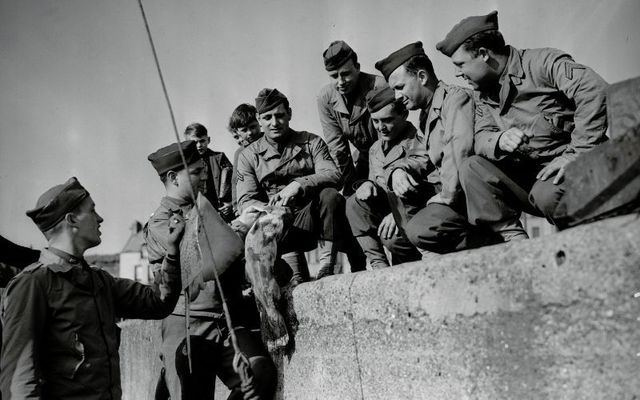 31st March 1942: US Army troops stationed in Northern Ireland examining the fish brought in by trawlers near their Irish camp. Getty

A British historian has shed new light on the arrival of US troops in Northern Ireland following the attack on Pearl Harbor during the Second World War.

Dr. Simon Topping, an associate professor of United States history at the University of Plymouth, has released a groundbreaking new book to coincide with the 80th anniversary of the arrival of US troops in Northern Ireland.

"Northern Ireland, The United States and the Second World War" explores the "friendly invasion" of 300,000 US servicemen between 1942 and 1945, studying the political and social impact of their arrival.

Topping spent more than a decade researching archives in the US, the Public Record Office of Northern Ireland (PRONI), the National Archives in London, and the Roosevelt Institute in the Netherlands to compile the fascinating new study.

"On the 80th anniversary of this historic event, many people would be surprised to learn that the first place in Europe that American soldiers set foot during the Second World War was Belfast," Topping told Mirage News.

"And they brought with them their good humor, gum, and nylons, but also criminality, drunkenness, and racism."

The first US troops arrived in Northern Ireland around seven weeks after the attack on Pearl Harbor when 6,000 troops traveled to Europe in advance of their deployment to North Africa in the autumn of 1942.

A much larger influx of American soldiers began arriving in the region in October 1943 and came to represent roughly 10% of Northern Ireland's population by the following January.

Thousands of black troops arrived in the province during the three-year period and were broadly welcomed by the locals, despite facing segregation and racism within the army, Topping said.

The academic described the period as an "intersection of America's racism and Northern Ireland's sectarian divisions".

"For African American soldiers, however, it was a window into a world without racial segregation," Topping said.

The book explores how US soldiers were issued with pamphlets offering advice on dating local girls, discouraging them from talking about alcohol, religion, and politics.

The American soldiers also brought a number of traditions to Northern Ireland over their time in the region.

"The Americans brought their sports and their music. To mark the Fourth of July 1942 Windsor Park hosted a baseball game between the ‘Kentucky Wildcats’ and the ‘Mid-West Giants’," Topping wrote in a piece in the Belfast Telegraph.

Topping also explores the political dynamics of the US arrival in Northern Ireland, examining how the arrival of troops sparked fierce opposition amongst nationalist politicians. Meanwhile, unionist politicians used nationalist opposition to the US troops as a means to further their own political goals, Topping said.

He added that the presence of American soldiers in Northern Ireland also strengthened the region's place in the United Kingdom.

"The war and the American presence undoubtedly helped integrate Northern Ireland into the UK and widened the gulf between it and neighboring Éire, but its own divisions remained."