The killing of British Field Marshal Sir Henry Wilson, an Irish-born unionist, in June 1922 sparked the Irish Civil War - and was likely ordered by Michael Collins. 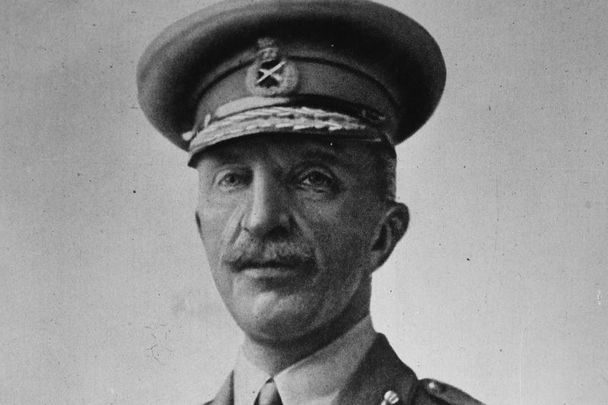 On June 22, 1922, British Field Marshal Sir Henry Wilson, considered a great hero of World War One who helped bring that battle to an end, unveiled a memorial at Liverpool Street station in London to the 1,200 men of the Great Eastern Railway Company who had died in the Great War.

At approximately 2:30 pm that afternoon, he was gunned down on the doorstep of his home in Belgravia by two London-born veterans of that war, men who had become IRA volunteers — Reginald Dunne and Joe O’Sullivan.

The killing was very likely ordered by Michael Collins, as Wilson was a fierce Irish-born unionist who approved of the pogroms driving Northern Catholics from their homes. His murder sparked off the Irish Civil War and changed the political landscape in the most profound manner.

Wilson was the first sitting MP to be killed in Britain since Prime Minister Spencer Perceval in 1812.

News of Wilson’s killing spread quickly. Several MPs brought the melancholy news to Westminster. The press gallery was soon informed and a brief report was prepared for the wires within an hour and a half of the shooting.

The assassination dominated the American evening newspapers that day and the following morning’s newspapers. It made the front pages of all the major newspapers, the New York Times, the New York Herald, the Washington Post, the Boston Globe, and the Chicago Tribune among them.

Since the Easter Rising of 1916, Ireland had been an issue that was rarely out of the American media. The gunning down of a British field marshal by two Irish republicans would have been a story in itself, but Wilson had also been the Chief of the Imperial General Staff (CIGS) – the head of the British army when the Americans arrived en-masse in Europe in early 1918.

Wilson was among the prime instigators of the joint Allied strategy with his friend Marshal Ferdinand Foch as supreme Allied commander. The coordination of British, French, Canadian, Australian, New Zealand, and American forces culminated in the Hundred Days Offensive which ended the war against Germany in November 1918 much sooner than many had anticipated.

Wilson’s death provoked universal shock among erstwhile comrades in arms. General John Pershing, the commander of the American Expeditionary Force in the First World War, said the killing “fills me with a sense of horror. To think that a man of his ability, who did so much in the world war, should be struck down by the hand of an assassin. It is terrible to contemplate. He was a personal friend and our associations were always most agreeable.”

Major General John Biddle, who was the American commander in England coordinating a million US soldiers passing through on their way to the Western Front, was “shocked and grieved” by Wilson’s death.

“I believe that next to General Pershing I probably knew him better and had more occasion to see and appreciate what a splendid officer and man he was. I had to depend a whole lot on the advice and assistance of Marshal Wilson.” 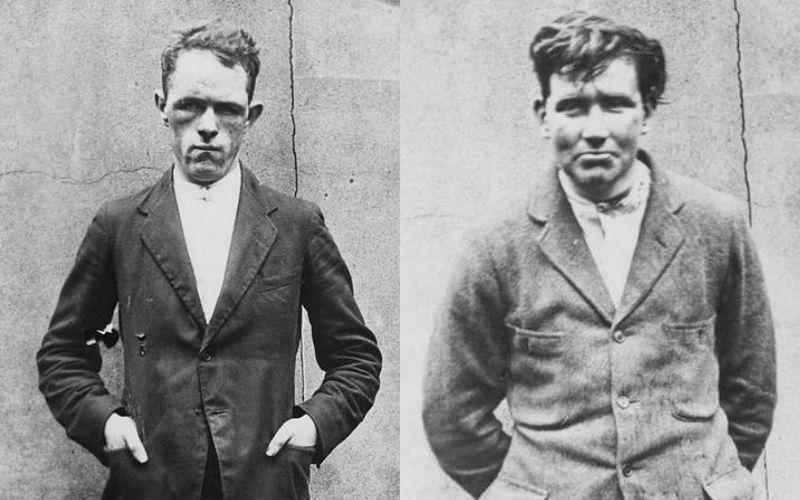 (L to R) Joseph O'Sullivan and Reginald Dunne before their execution in 1922. (Public Domain)

Dunne was the son of a British bandmaster; his mother’s family was from Co Monaghan. O’Sullivan was from an “old Fenian family”, according to his brother Pat, who like his younger brother, joined the IRA during the War of Independence.

The O’Sullivans were from west Cork. John O’Sullivan, Joe’s father, got a job as a master tailor in London, as did Pat O’Sullivan. “Our house in London was always a place of call for any of the men on the run,” Pat recalled in his application to the Irish state for a pension.

“Why bring my family into it, not to boast, no, but to help you form a true picture. From 1919 on my whole life onwards was devoted to the fight for freedom; I will always be satisfied in my conscience that I did my duty for Ireland.”

Historians have tended to focus on the role of the Irish American diaspora in the revolutionary period. The Proclamation references “our exiled children in America”. In 1919, Éamon de Valera went to America to seek support for Irish independence not to Great Britain.

Yet the Irish diaspora in Britain played a critical and under-appreciated role in the Easter Rising and the War of Independence. The full extent of its support for Irish independence has only become apparent now through the release of the Military Service Pensions Collection (MSPC).

Dunne, an only child, was attracted to Irish nationalism through traditional music. Britain was the “enemy country” and he exhorted his grieving parents to live in Ireland which they did after his death.

In a letter to Rory O’Connor, then the officer commanding in Britain, Dunne revealed how he felt slighted as a second-generation IRA volunteer.

“There is moreover a certain amount of scorn for men born over here. Some of these latter class have very little to interest them materially in our cause. They have everything to lose, on the other hand, and in many cases their own parents are against them. These men are fighting because of the blood that’s in them. Many of them are sensitive about their London accents and manners.”

O’Sullivan told his father: “The felon’s cap is the noblest crown an Irish head can wear”. His father had no doubt that his son did the right thing. “I feel you know of my loss for which I have no regrets as it was done for the love of his faith and for Ireland. He removed a dirty Orange dog.”

Dunne and the O’Sullivan brothers were able to use their London accents and wound badges to enter British army barracks and steal cartloads of weapons for the IRA.

“I am an Irishman, born in County Longford,” Wilson had declared in the month before he was shot, but he was a southern unionist who regarded the Anglo-Irish Treaty of December 1921 as a sell-out to the “murder gang”, as he called the IRA.

After his four-year term as CIGS ended in February 1922, he was elected unopposed as a unionist MP for North Down two days later.

Wilson had been appointed military adviser to James Craig’s Northern Ireland government in March 1922. Dunne and O’Sullivan held Wilson responsible for the ‘Orange terror’ — the Belfast pogroms against the Catholic population which began in 1920 and reached a new intensity of violence by summer 1922.

Both men had been severely wounded in the war. Dunne’s kneecap had been shattered; O’Sullivan lost a leg at Passchendaele and was fitted with an artificial limb.

Given their disabilities, the attack on Wilson would be tantamount to a suicide mission. They ran away from the scene with police officers and an angry crowd chasing after them.

The chase was witnessed by the American ambassador, Colonel George Harvey, who had as his guest the US Chief Justice and former president William Howard Taft. Both men heard shots and thought they were being targeted.

Harvey, Taft, and former president Woodrow Wilson were among those who sent wreaths to Wilson’s funeral.

His shooting would have disastrous consequences for Ireland. Since April 1922, anti-Treaty IRA members had occupied the Four Courts in Dublin, in defiance of the Provisional Government, which feared that challenging them would lead to civil war in Ireland.

In May, Michael Collins and Éamon de Valera, the leaders of the pro- and anti-Treaty factions of Sinn Féin, announced a pre-election pact in which they agreed to field candidates in the general election of June 1922 in accordance with their respective strengths in the outgoing Dáil.

The British government believed the Irish electorate was being deprived of a real choice. Acceptance of the Treaty was a prerequisite for serving in an Irish government, but the pact gave rise to the possibility those terms could be violated.

A copy of the official IRA newspaper An t-Óglách had been found on Dunne. The paper was available in newsstands in Ireland, but it was enough for British PM Lloyd George to pin the order for the assassination — erroneously, as it turned out — on the anti-Treaty forces occupying the Four Courts.

He wrote to Collins post haste that evening: “His Majesty’s government cannot consent to a continuance of this state of things, and they feel entitled to ask you formally to bring it to an end forthwith.”

On the afternoon of the Wilson funeral, Winston Churchill (as secretary of state for the colonies) told the House of Commons in public what Lloyd George had told Collins in private.

The occupation of the Four Courts, he said, was a “gross breach and defiance of the Treaty. If it is not brought to an end... we shall regard the Treaty as having been formally violated.”

This was the ultimatum that forced the hand of the nascent Irish government. Six days after the Wilson shooting, the Provisional Irish Government opened fire on the Four Courts using borrowed British artillery, so beginning the Irish Civil War. 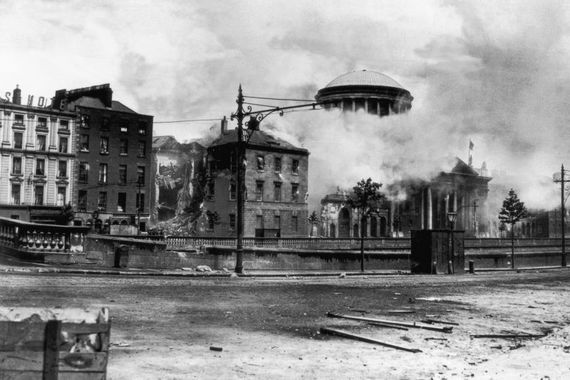 The Wilson shooting was Ireland’s Sarajevo moment. Without it, there would have been no British ultimatum, no shelling of the Four Courts, no Civil War. Michael Collins would have lived, and the history of the new Irish state would have been different.

The impact of the Wilson assassination has been underestimated, because of the assumption that the Civil War would have happened anyway and his death only hastened the inevitable.

Yet, as IRA commander Florrie O’Donoghue remembered: “Despite six months of the talk of the possibility of civil war, no one had allowed himself to believe it to be inevitable, and no plans existed on either side for conducting it.”

Wilson died a hero in the worldview of those who had been on the same side in the First World War, but his posthumous reputation suffered grievously from the publication of his diaries in 1927 with a narrative by his friend Charles Callwell.

The diaries revealed an indiscreet, duplicitous man who privately ridiculed many of his erstwhile allies. The book was especially badly received in the United States.

Wilson described his namesake Woodrow sarcastically as “my cousin”. As an old-fashioned imperialist, he believed President Wilson’s view of self-determination for small countries was ridiculous. President Wilson was a “dangerous visionary”, “rather tiresome” and an “ass”.

The pair met in December 1918 after the Armistice was signed. “He did not impress me in the least. He told me his grandfather and grandmother both came from Ulster,” Henry said of Woodrow.

Wilson also revealed that Pershing had been privately “very open in ridiculing the League of Nations and he evidently looks forward to the president being unable to get a ratification”.

The New York Times reviewer was understandably scathing about the book. “One by one the reputations of prominent figures in the World War are being destroyed by their own apologists or the shortsighted zeal of injudicious friends. The latest to suffer is that of Field Marshal Sir Henry Wilson who book is one of the most sensational self-exposures in all literature.”

*Ronan McGreevy’s "Great Hatred: The Assassination of Field Marshal Sir Henry Wilson" is published by Faber & Faber, priced $27.95 in hardback. It is also available as an audiobook through Audible.