The Irish legend of the Pooka

In Irish folklore, the figure of the Pooka is best known for its cunning and wile.

The Pooka, or in Irish Puca, (goblin) is a phantom fairy creature that features in Celtic folklore and fairytales of Ireland.

A similar fairy entity appears in the mythology of Scotland, Wales, Cornwall, Channel Islands, and Brittany. Often thought of as an animal spirit, some accounts believe it gets its name from Poc, meaning he-goat in Irish. In fact, Pooka is a changeling and can take an animal or human form; like a horse, donkey, cat, dog, bull, young man, or even a voluptuous young woman. The animal Pooka is usually jet black with fiery golden or red eyes. Some associate it with the devil!

The mountains and hills are this creature’s domains. Depending on part of Ireland you lived in, Pooka was thought to be either helpful or menacing. It has been known to help farmers for example, but it can also wreak havoc.

Generally, however, perceived wisdom holds that an encounter with Pooka is not considered propitious, as this fairy creature is a portent of oncoming doom. Known for its cunning and wile as well as lies and deception, Pooka’s archetype is trickster. It is also a fertility spirit since it has the power to create or destroy. As well as the ability of human speech, it is a gifted prophesier.

November is the month of Pooka. In Ireland of past, at Halloween, many children went out “with Pooka”, but others stayed indoors, fearful of stories they had heard of what Pooka did to children. In popular culture, other iconic mystical creatures are incarnated from Pooka. For example, the bogeyman is derived from Pooka. Also, Easter Bunny, which is pagan in origin; a fairy-like creature that brings chocolate eggs and sweets to children at Easter has its roots in fertility spirit theme of Pooka. In the film Harvey (1950), directed by Henry Koster, a giant white bunny was inspired by Pooka. 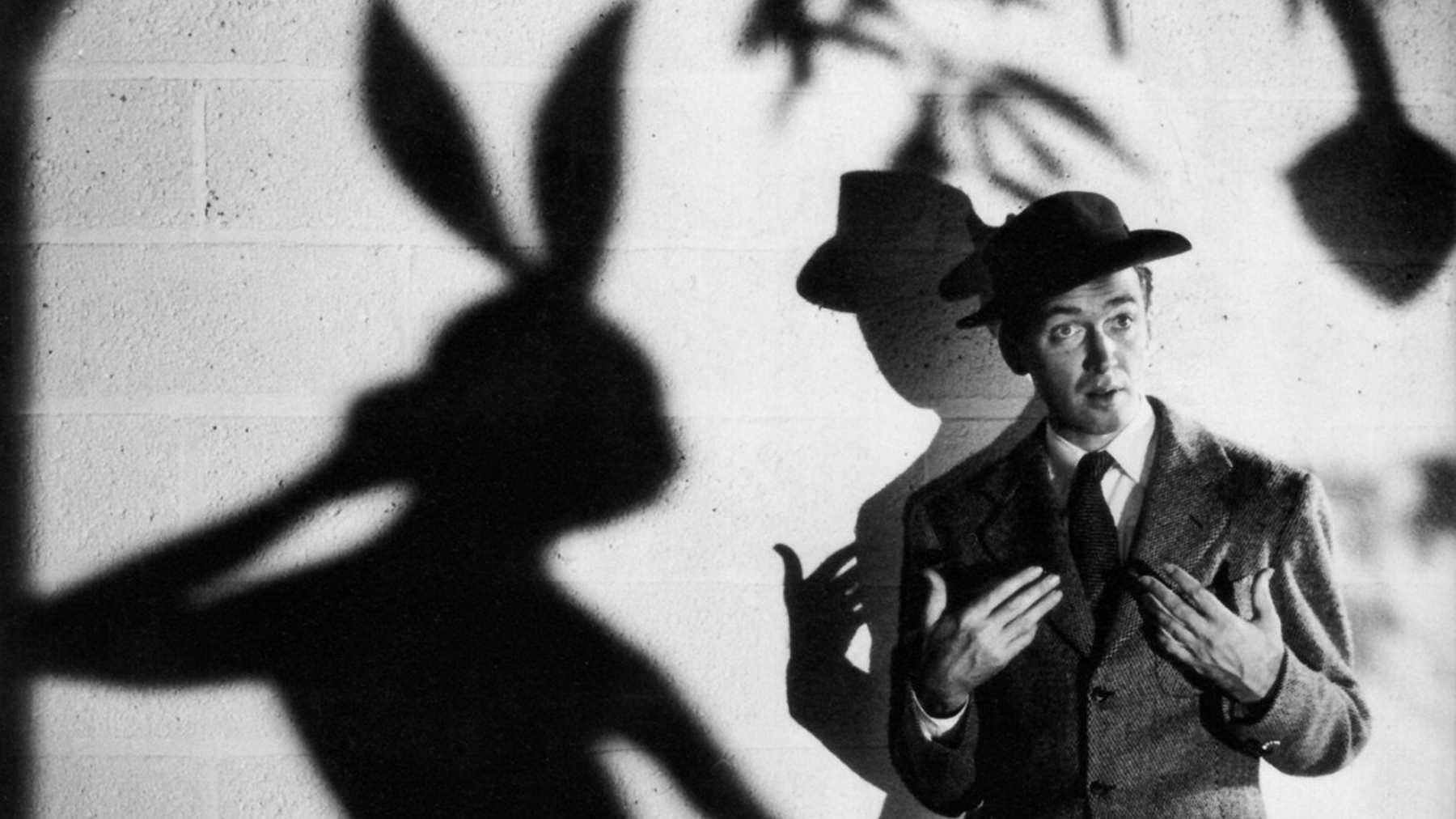 In the film Harvey (1950) a giant white bunny was inspired by Pooka.

This mythic creature is also well documented in the classic literature of Ireland and Britain. Irish poet and playwright W. B. Yeats depicts Pooka as an eagle, while Irish novelist and playwright Brian O’Nolan, who wrote under the pseudonym Flann O’Brien, was also so inspired. O’Brien’s masterpiece, At Swim-Two-Birds, features a character called Pooka MacPhillemey, a “member of devil class”. In William Shakespeare’s A Midsummer Night’s Dream, Puck is a mischievous and quick-witted sprite responsible for setting many of the play’s events in motion through his magic.

Often appearing as a horse, Pooka sometimes gallops across the countryside knocking down fences and gates and destroying crops. In this form, Pooka likes to take a rider, usually a drunkard, on a wild ride all night and shake him off in the grey of the morning. This person, already heavily inebriated, is also under the spell of Pooka and has no recollection of what happened. This often accounts for why some people who, having gotten very drunk, report that they have no idea what happened the previous night.

The only man to ever successfully ride a Pooka was High King of Ireland and founder of O’Brien dynasty, Brian Boruma Mac Cennetig (941-1014), or more commonly known as Brian Boru. Brian managed to control the magic of the creature by using a special bridle that used three hairs of Pooka’s tail. Brian’s physical prowess meant he was able to stay on its back until exhausted Pooka surrendered to Brian.

The king forced it to agree to two promises. First, that it no longer tormented Christian people and ruined their property, and second that it would never again attack an Irishman, except those who were drunk or were abroad with evil intent. Although Pooka agreed, it appears to have forgotten its promises over years. Remember Pooka’s overlord – The Prince of Lies?

Past history records many sightings of Pooka all over the country, but the most famous story is an animal spirit that gave its name to Poulaphuca (Hole of Pooka) at the boundary of River Liffey between counties Kildare and Wicklow. Presently this is the site of a hydro-electric power station, where the river flows through a narrow gorge before plunging 150 feet (46 meters) in three stages. Under the second drop there is a pool, and this is called Hole of Pooka. Irish author Padraig O’Farrell (1932-2004) narrates this story which was inspired by the written account of an anonymous Kildare man. The writer also has an interesting postscript at the end:

“In November 1813, Kildare Hunt known as Killing Kildares set out. Having indulged in traditional stirrup cup at Tipper crossroads, near Naas, hunt failed to raise a fox until it was approaching Tipperkevin, north of Ballymore Eustace, county Kildare. Here a large fox appeared and led a course towards Liffey. Simultaneously, an un-mounted black horse appeared, that did not belong to any of riders. It was Pooka!
.
"The terrain was difficult and fox ran fast, so that near Liffey, only one of members of hunt, a man named Grennan, and horse, who was really Pooka, remained with pack. The gorge was in full spate but hounds were gaining on their quarry and started to pick their way across rocks. Seeing danger, Grennan attempted to recall hounds, but Pooka ahead of them was tempting them onwards. The fox headed for ledge on narrow part of gorge then, seeing Pooka’s red eyes spitting fire, fox jumped. It missed ledge, falling into turbulent waters below. The Pooka easily leaped across gorge, disappearing into woodlands, but pack of hounds hard on scent of fox went headlong into pool.
.
"Looking down, Grennan saw fox and hounds trying desperately to swim to safety through swirling swell; other hounds dashed against rocks were yelping in pain and dying. He wept as most of pack went under. Suddenly his sorrow give way to terror, he heard a diabolical neighing, like an animal laughing – from woods opposite. Grennan knew then it was Pooka."

The writer of the original story describes how in the 1930s, as he stood above the valleys of Liffey and King’s River, a sudden sadness came over him and he wept at the sight of so many humble homes which would soon be submerged forever by Blessington Lakes, created to supply water for a power station at Poulaphuca.

Between 1938 and 1940 seventy-six houses were demolished and bridges at Humphreystown, Baltyboys, and Burgage were blown up before the entire valley was flooded for the hydroelectric power station. A Protestant church, St. Mark’s, built-in 1682 was also submerged. To this day there have been many claims of people hearing bells tolling beneath waters of lakes.

Lest you think that Pooka is just another myth from Irish history – think again! The Pooka exists in contemporary Ireland also. For example, it has a strong resonance with events of the recent past, and not just symbolically either. Remember the Pooka is always around just before the disaster. Cork-born folklorist Thomas Crofton Croker in Fairy Legends and Traditions (1825) alleges that Pooka does appear as a real flesh and blood person. Apparently, Pooka in a human guise approaches someone, inveigles its way into their company, and subsequently predicts unfortunate events that would befall them. Of course, when adversity does strike, this entity is never around. Hidden in its supernatural realm, it revels in the joy of watching humans enduring the effects of catastrophic events.

For example, consider this report recorded by folklorist Owen Harding in July 2011.

"On Wednesday, 1st November, 2006, about 7.30pm, Denis O’Rourke, a business man and investor (originally from Cork city but then living in Malahide, County Dublin), believes he met Pooka. A strange and well-dressed man was outside of front gate of Denis’s home. This man struck up a conversation with Denis, claiming he had known him for years. He went on to tell Denis about his family – true facts he could not have known, going back three generations, and how over years they had lost and gained money. This man, who did not give a name, also said that family finances were based on more than just heritage, they were also subject to greater economy of a nation. Over next couple of years O’Rourke witnessed not merely fiscal fall of country, but his own financial ruin, including his business, his family home and two other houses he had invested in."

Harding alleges that there are many similar reports, and possibly many more from others who are too embarrassed to reveal them. The problem, Harding claims, is that many people are not aware that anything unusual has happened until after Pooka has left. Not only that, but when disaster does happen, Pooka, like T.S. Eliott’s elusive cat Macavity,* “is not there”!

*Macavity is celebrated in a poem by Eliot as Mystery Cat; musical Cats is based on poem.