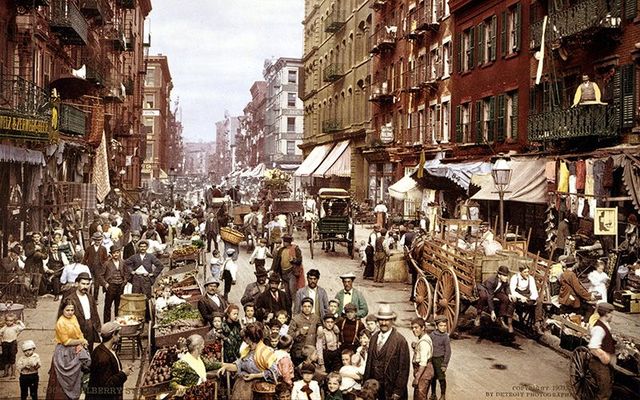 Mulberry Street, c 1900: The New York Tenement Museum documents the struggles of the Irish in America. US Library of Congress.

Hidden away in the Lower East Side of Manhattan, the New York Tenement Museum tells the tale of thousands of Irish families that sailed from Ireland to the United States in search of a better life.

The Moores lived in a cramped and dank apartment in the building at 97 Orchard Street which became the New York Tenement Museum.

Dave Favalora, Director of the New York Tenement Museum, speaking to IrishCentral in 2020, said that the Orchard Street building consisted of 22 apartments holding 22 large families. In total, as many as 80 people might have lived in the small building.

Their story is not uncommon for Irish immigrants who sailed across the Atlantic in the late 1800s.

Favalora said that Irish immigrants were unusual in the sense that they didn't come to America as family units. Instead, they often came as young individuals and started families with fellow Irish immigrants.

That is how the Moores came to Orchard Street.

Joseph Moore and Bridget Meehan came to America alone and later married one another. They lived in the notorious Five Points neighborhood in Manhattan where so many other Irish immigrants settled after stepping off the boat.

More than 90% of the people who lived in Five Points were Irish immigrants, according to Tyler Anbinder, an immigration history professor from the Colombian College of Arts and Science.

The neighborhood was renowned for crime, prostitution, child mortality and poverty and most Americans probably avoided it, according to Anbinder. To the Irish, however, it wasn't that bad.

Work was much steadier, even in a neighborhood like Five Points, than it was in Ireland.

And so, Irish families stayed there, despite the harrowing conditions, as the neighborhood's cheap rent allowed them to save enough money to bring more family members over or to send money to family back home.

The Moores eventually dragged themselves out of Five Points and into relative comfort on Orchard Street on the Lower East Side, however.

Tenement housing shot up in areas like the Lower East Side to accommodate the huge influx of immigrants from all over Europe as the 1800s drew to a close.

Despite their newfound accommodation, they were still a lot closer to poverty than they would have liked.

Joseph Moore acted as the sole breadwinner for the family and worked as a waiter, a notoriously low-paying job in the late 1800s. Moore took home a paltry $20 a month and the tiny apartment on Orchard Street set them back $8 each month. Almost half of their monthly income was gone in one fell swoop.

The Moores had very little money, especially considering they had eight children, four of whom would die in childhood.

This was, unfortunately, a reality for most Irish immigrant families in the late 1800s New York.

Irish immigrants made up about 25% of Manhattan's population at the time and most of them lived in poverty. There was a significant anti-Irish and anti-Catholic sentiment throughout America in the last 19th Century and Irish people often had to settle for low-profile jobs when they first arrived in America.

Most started as low-paid laborers but quickly rose up the employment ladder and around 25% of immigrants set up their own business within 15 years of arriving on American shores.

Today, the New York Tenement Museum on Orchard Street stands as a testament to the endeavor and courage of the Irish community 150 years ago, that tried to forge a better life in the Land of Hopes and Dreams.

There are reports that the Moore story is to be "replaced" with that of a hybrid tour telling the stories of two men named Joseph Moore - one Irish and one black.

Shortly after opening Joseph Moore's apartment at the museum, researchers at the Tenement Museum came across in a city directory a second Joseph Moore, another waiter who lived in a nearby neighborhood, also in 1869. The second Joseph Moore, who was listed as colored, never lived in the building and was born in a rural village in New Jersey.

Educators at the museum believe that the two Joseph Moores represent an excellent opportunity to explore the history of Irish and black people in New York's tenements during the late 1800s.