How did Annie Moore become the first person through Ellis Island?

It is unlikely that she was actually the first person to step onto the island as has been suggested. 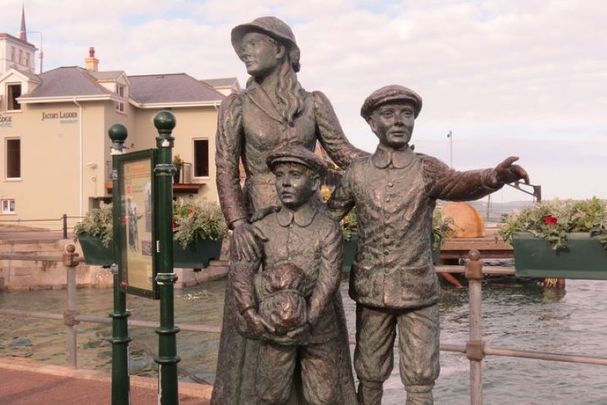 Annie Moore's statue at the Cobh Heritage Center in Cork.

Annie Moore is widely regarded as the first person to set foot on Ellis Island after it opened as an immigration facility in 1892, but this may not be entirely true.

Moore arrived on the SS Nevada on Jan. 1, 1892 with her two younger brothers, Anthony and Philip, and was the first person to be processed in the new facility, for which she was presented with a commemorative $10 gold coin.

That she was the first person to be processed at the facility is undeniable, the records are conclusive.

However, it is unlikely that she was actually the first person to step onto the island as has been suggested.

There are various tales about how Moore became the first person to step off the ship. One version tells of a German man who gracefully stepped aside in an act of chivalry to allow Moore off the ship ahead of him. Another tells of an Irishman named Mike Tierney who did the exact same thing.

The truth is probably a lot less romantic.

Author Ray O'Hanlon said that Ellis Island officials were looking to create a commemorative china plate of the first person to be processed at the facility, but they were less than impressed by a group of unattractive and unphotogenic Russians who disembarked the vessel first.

O'Hanlon said that it was an early example of marketing and gave Moore a brief moment of fame.

"Ahead of Annie and her brothers were a bunch of Russian cossacks with beards," O'Hanlon said.

"In an early example of marketing, the officials at the bottom of the gangplank looked at those guys and thought that they couldn't put them on a China plate, so they looked down the line and called her down."

Annie Moore endured a difficult life after her moment in the spotlight. She moved to Manhattan and married a German immigrant and had 11 children, six of whom died in childhood.

She lived most of her life in poverty and died from heart failure at the age of 50 in 1924.

Moore's story has been immortalized in bronze on both sides of the Atlantic - there is a statue of her at the Cobh Heritage Center, her port of departure, and at Ellis Island, her port of arrival.