A floor map at the 1897 New York Irish fair offered Irish immigrants the chance to walk on their county soil again. 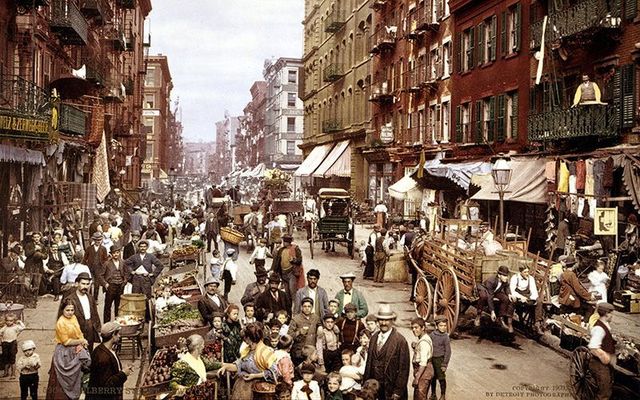 In his remarks at the White House for St. Patrick's Day 2015, President Obama mentioned the 1897 Irish fair held in New York as an example of how emigrants held on to their culture.

He said the fair showed that Irish Americans “put their full hearts into their work, even as their hearts were far from home.

He mentioned that a floor-map of Ireland at the 1897 New York Irish fair, containing soil from each of the 32 counties, allowed Irish immigrants to step foot on native soil once again.

Sponsored by the “New York Journal”, the map exhibition drew the biggest crowd at an already successful fair as homesick Irish paid ten cents to walk across land they never again thought they’d set foot on.

The Irish Palace Building Fair opened on May 11, 1897, to raise funds for the building of a headquarters for the United Irish Societies of the United States. The fair was held at Grand Central Palace which originally stood at 245 Park Avenue before it was demolished in the 1950s. It aimed to raise $1 million over 20 days to build headquarters that would include a library, shooting range gym and riding school. The palace was the main goal of the Irish Palace Building Association, who believed it would be an important center for the social and literary development of Irish immigrants.

The news of the fair spread far and wide and attracted much media attention around the world. A report in the “New Zealand Tablet” from August 1897 tells of the fair’s opening and states that the fair offered “a multitude of booths, in which were scores of charming Irish girls, with hundreds at attractive exhibits for sale.”

Each county was represented with a booth and other attractions included a piece of the Blarney Stone, earth from Charles Stewart Parnell’s grave, sod from the Hill of Tara and the mounds of Clontarf, an oil painting of Robert Emmet, a portrait of Lord Edward Fitzgerald, and a large scale replica of Blarney Castle. The New York Times reported that the fair worked to “transport the visitor, as far as possible, into the very vicinity and local surroundings of Ireland.”

It was the floor-map centerpiece that stole the show, however. A long, rectangular section of the Plaza was sectioned off with a promenade around the sides. The rectangle was sectioned off into the 32 counties, each cast in the form of the county they represented and whose soil they contained.

The rectangle of soil ignited very strong passionate responses from amongst its visitors. The “New Zealand Tablet” report says, “Mrs Kitty Murphy, an octogenarian, who lives in Washington Square, was born in the county of Fermanagh. When she entered the Fair, she made haste to go to her old county. The old woman stood for a moment on the soil and lifted up her face in devotion. Then she sank on her knees and began to pray. At the time the Fair was filled with visitors, and the spectacle of the old woman praying was interesting and affecting.” Such “a pathetic scene is witnessed daily” at the fair as the simple concept stirred up old feelings of nostalgia amongst the Irish.

Probably the most attractive feature of the fair is a geographical miniature of the green isle which covers nearly the whole of the centre of the main floor. Each county in the map is covered with soil brought from the county in Ireland to the fair, so that for a small outlay the Irish visitors can literally not only once more place their feet upon their native soil, but even upon the ground of the county of their birth.

The fair is also said to have been a portrayal of strong nationalism and calls for Irish independence. In the opening speeches, leading Irish-American Dr. Chauncey M. Depew commended the fair, stating that he felt “more of an Irishman than he had ever been before.” He continued to say “this fair is different from any other I ever attended. This is an Irish fair. It is not a fair for Ireland. Ireland needs no fair. All she wants is fair play. She asks for no charity; all she wants is justice.

Although raising funds under the title of the United Irish Catholic Societies of New York, the fair was mainly organized by the Irish Volunteer Regiment and Clann na nGael, who had pledged to the use of physical force to win Irish independence. By this time, Irish nationalists were recovering from the the defeats of home rule in 1886 and 1893, the fall of Charles Stewart Parnell in 1890 and the subsequent collapse of the Irish National League. However, New York remained the center of the movement in the U.S. and there was still a desire amongst Irish immigrants in America for an autonomous, independent Ireland.

Despite the success of the event and many donations being made toward the Palace cause from abroad, the amount of funds raised fell far below the $1 million target, raising just $35, 597 in total. This money was later given to the American Irish Historical Society to assist in the purchase of 991 Fifth Avenue, where they reside to this day.

Irish fairs were not uncommon across the U.S. during the 19th century and were considered a strong feature in the Irish American Catholic identity of the time. At Chicago’s World Fair in 1893, the Irish Village set out a stereotypical 19th century Irish village for visitors. The village included recreations of Muckross Abbey, Blarney Castle and represented cottage industries of Ireland through the different crafts carried out under thatched cottage roofs.