His music, for 40 years, has pretty much bled red, white and blue rather than green, white and gold. Still, why are some people shocked to learn about Bruce Springsteen’s Irish and Catholic roots? 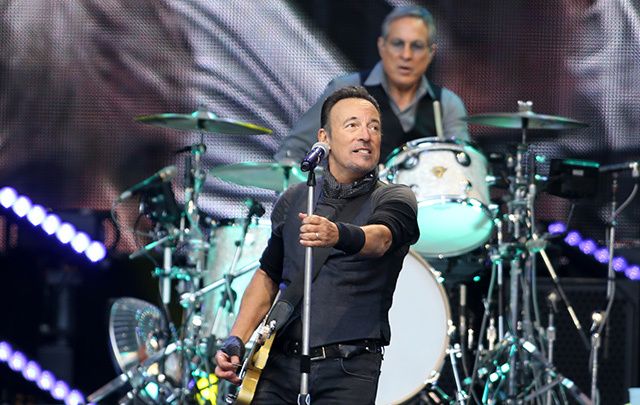 Bruce Springsteen playing at Croke Park in Dublin in May 2016. RollingNews.ie

Happy Birthday to "The Boss" a proud Irish American and a devout Catholic, those many people don't even realize.

His name does not suggest it. And his music, for 40 years, has pretty much bled red, white and blue rather than green, white and gold.

Still, why are some people shocked to learn about Bruce Springsteen’s Irish and Catholic roots?

None other than talk show host Stephen Colbert – who proudly dubs himself “America’s most famous Catholic” – recently interviewed Springsteen and admitted he was stunned to learn the singer was raised in the faith.

“Oh yeah,” Bruce muttered, shaking his head in a way – somewhere between grateful and hateful – familiar to those of us raised in the church.

Springsteen has a new memoir out and, in it, he makes much of his Irish roots as well as the deep influence – for better or worse – of the Catholic Church.

How @springsteen's Catholic faith makes art from darkness, and why it's beautiful. https://t.co/Wc5yKzhUzv pic.twitter.com/SaKgdAXayG

In recent years, genealogists revealed Springsteen’s great-great-great-grandfather, Christy Gerrity, from Rathangan, Co. Kildare, came to the U.S. in the 1850s.

But we didn’t really need a memoir or genealogist to tell us about Springsteen’s roots.  Anyone who has listened to his music could identify a deep Catholic strain – and more recently an Irish one – in his music.

Going all the way back to his 1973 debut "Greetings From Asbury Park, N.J.," a then-24-year-old Springsteen sang, “Nuns run bald through Vatican halls, pregnant.  Pleading Immaculate Conception.”  That, of course, is from the (biblically-themed) Springsteen song “Lost in the Flood.”

You didn’t know this guy was Catholic, Colbert? (Dedicated Springsteen fans also know he has a song that he’s never officially released from his early years called “If I Was the Priest.”)

In his new memoir "Born to Run," Springsteen writes that his youth in Freehold, NJ took place “literally in the bosom of the Catholic Church.”  Close to his home were St. Rose of Lima church and school, both of which he attended.  In the book, he laments the harsh discipline meted out by priests and nuns.

Book cover of "Born to Run."

“My knuckles classically rapped, my tie pulled ’til I choked… All business as usual in a Catholic school in the fifties.  Still, it left a mean taste in my mouth and estranged me from my religion for good,” he wrote.

Later, Springsteen admits, he “came to ruefully and bemusedly understand that once you’re a Catholic you’re always a Catholic.” He adds, “I don’t participate in my religion but I know somewhere…deep inside…I’m still on the team.”

As for the Irish, Springsteen dedicates an entire chapter to them in his memoir, right after the one about his mother’s Italian side.  He grew up on his block surrounded by what he calls “old-school Irish, the people who have raised me – McNicholases, O’Hagans, Farrell's.”

On the darker side of things, Springsteen writes about the depression which wracked his father, telling Colbert that the “Irish side” of his family was “shot through” with depression.

More recently, Springsteen has married Irish music with his Catholic lyrics.  There was, of course, the entire album recorded in Dublin, featuring some of his classic songs reworked with Celtic influences.  Then, from the recent album "Wrecking Ball," there is “Death to Our Hometown,” with its Irish pipes and outraged lyrics about power brokers who wrecked the economy.

In the end, what Springsteen has become most profoundly in recent years is a social justice Christian. The song “Ghost of Tom Joad” waits – and waits and waits – for the day “when the last shall be first, and the first shall be last.”

The notorious “American Skin (41 Shots)” humanizes the victims of police brutality – while, it must be added, never dehumanizing the police officer, who truly doesn’t know: “Is it a gun?  Is it a knife?”  The cop is even “praying” for his victim.

Many Springsteen fans rejected this “liberal” turn in his writing. But of course, it wasn’t really a turn. It was always there. They just didn’t know it.

I’m looking at you, Colbert!