Has the Amelia Earhart and Fred Noonan mystery been solved? Or has it deepened? 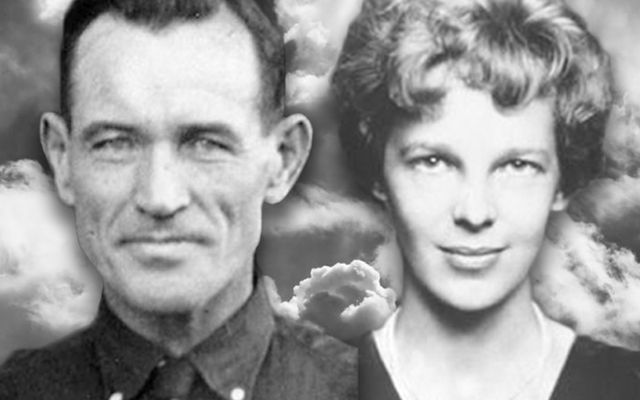 On Jan 5, 1939, two years after her disappearance the world-class aviator Emelia Earhart was declared dead but thousands believe she and her navigator, Fred Noonan, survived.

The eighty-year-old mystery surrounding the fate of aviator Amelia Earhart and her Irish American navigator, Fred Noonan, has either been solved or is possibly close to being solved.

The purported answer to the Earhart riddle and the possible answer are not the same. Indeed they are separated by vast stretches of the Pacific Ocean.

The Earhart case, one of the great mysteries of the past century, was seemingly blown wide open Sunday evening by a two hour documentary on the History Channel that featured the investigation work of three former U.S. government employees – a former top FBI agent, an ex-Treasury Department agent and a retired U.S. Air Force fighter pilot.

The work of the three stands in ironic contrast to a central contention of the documentary – that the U.S. military was aware that Earhart and Noonan had been taken prisoner by Japanese forces occupying the Marshall Islands in July 1937 - but that nothing was done or said because the U.S. had cracked Japanese codes and did not want to reveal this fact by raising Earhart’s disappearance.

The photo, apparently misfiled for decades, shows people on a harbor dock on Jaluit Island in the Marshall chain.

A man standing on the left is Caucasian and believed to be Chicago-born Noonan. A woman seated in the background with her back to the camera (and wearing pants which was Earhart’s habit) is believed to be Earhart.

A ship in the background is towing an aircraft on a barge.

The ship is identified as the Koshu Maru and the aircraft, through expert analysis of the photo shown in the documentary, matches the specifications of Earhart’s aircraft, a twin-engined Lockheed Electra.

The documentary contends that Earhart and Noonan, off course and facing into a Pacific storm, had turned around and began flying to what they thought were the Gilbert Islands.

But they were farther north than they believed and instead ended up making a rough landing on an atoll in the Marshalls, Mili Atoll.

The two were taken into custody by the Japanese and the trail ultimately leads to the island of Saipan where Noonan was executed and Earhart may have died from the effects of dysentery.

However, this is where the progress of the documentary’s account hits a snag.

An effort to recover bones from a believed gravesite for the two on Saipan turns up no remains, though a documentary made in the 1960s – and highlighted in the History Channel account - did claim to have recovered bone fragments.

Those fragments, however, are nowhere to be found today.

That’s not to say that there isn’t a search going on for the remains of Earhart and Noonan.

The International Group for Historic Aircraft Recovery (TIGHAR) is currently focusing on Nikumaroro Island, nearly 1,000 miles from the Marshall Islands, and part of the Pacific island nation of Kiribati.

According to group’s website, it sent four border collies — named Marcy, Piper, Kayle, and Berkeley — to the island on June 30 as part of an expedition sponsored by TIGHAR and the National Geographic Society.

According to National Geographic, TIGHAR researchers had previously visited the island and narrowed their search to a clearing they call the “Seven Site,” where a British official reported finding bones in 1940.

Added the TIGHAR account: “In 2001 searchers located unearthed possible signs of an American castaway at the site, including the remains of campfires, and several U.S.-made items including a jackknife, a woman’s compact.

“Earhart and her navigator, Fred Noonan, disappeared on July 2, 1937, on their way to a refueling stop at Howland Island, about 350 nautical miles northeast of Nikumaroro.

“TIGHAR’s theory is that, when the aviators couldn’t find Howland, they landed on Nikumaroro’s reef during low tide.

“All four dogs alerted to a particular spot, indicating they had detected the scent of human remains, and excavation began on July 2, the 80th anniversary of Earhart’s disappearance.

“No bones have been found, but TIGHAR researchers collected soil samples, which have been sent to a lab for DNA testing. If she were buried there, the soil could still contain traces of Earhart’s DNA.”

Fred Noonan was born in April, 1893 in the Chicago area. Earhart was born four years later so this year marks the 120th anniversary of her birth.

Noonan’s father, Joseph T., had been born in Maine and his mother, Catherine Egan, in London.

The many theories surrounding the fate of Earhart and Noonan only continue to multiply with the passing years, but the two latest searches seem to be closing in on the possible truth.

But which one is the truth?

Indeed, will either turn out to be true?

Absent some top secret government file with all the answers, hard work, luck, and a smoking gun in the form of DNA will be the most likely solution to this enduring riddle of the skies, and the seas.