On This Day: British forces begin the burning of Cork City

The initial reports after the burning of Cork City in 1920 prove that "fake news" isn't necessarily a new concept. 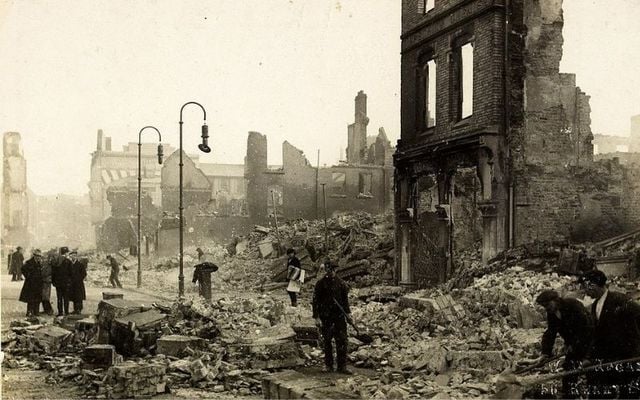 The rubble in Cork City following the attack. Wikimedia Commons

On this day 100 years ago, British forces burned parts of Cork City in retaliation to an IRA ambush with initial reports from the attack blaming Irish republicans in an early example of fake news.

So you think fake news is a recent phenomenon? On the night of Dec 11-12, 1920, members of two Royal Irish Constabulary (RIC) units, the Special Reserve and Auxiliary Division, shot, burned, and looted their way through parts of Cork city center killing and wounding a number of people and causing damage estimated at $194m/€175m (in today’s value).

In the immediate aftermath much of the press, particularly the British press, either claimed no-one was able to identify those involved or else attributed to the violence to ‘Sinn Feiners’ (meaning the IRA).

In the days after Cork was burnt by the Black and Tans (as the RIC’s Special Reserve was known) and Auxies (as the Auxiliary Division was known), English newspapers like The Graphic reported merely that ‘incendiaries’ had set fire to the city.

The Illustrated London News claimed it was “impossible to say” which ‘faction’ was responsible but that citizens had requested that General Strickland deploy military patrols to guard the city center.

Within a couple of days, Sir Hamar Greenwood, the British government’s Chief Secretary for Ireland, went even further. He explicitly denied any involvement of the British forces and, instead, unequivocally blamed the burnings on the IRA.

Yet the identity of the real perpetrators was widely known. By 13 December, while the fires still burned, the New York Herald could report that the British government was having to take steps to “…remedy the deeds of their own wild men.”

Rejecting widespread demands for an independent inquiry, the British government commissioned its own, military, investigation by General Strickland. It then refused to publish the resulting ‘Strickland Report’ (which correctly identified some of those involved in the burning).

In response, Professor Alfred O’Rahilly of University College Cork and others gathered a series of eye-witness accounts of events over the night of 11-12 December. These were then published as a report by the Irish Labour Party and Congress of Trade Unions as ‘Who Burnt Cork City?’ by the end of January 1921. The report was explicit in its purpose from its very first line: “…The policy of the British Government is to give an immediate indignant denial to the infamous suggestion that any Irish outrages are due to Crown forces, to insinuate or assert that on the contrary they were done by Irish "extremists," and meanwhile to refuse every request for an impartial inquiry on the ground that it would be an aspersion on heroes...”.

This included over sixty first-hand accounts from firemen and various individuals who had been present during events in Cork on the night including visitors from England and the United States. They describe in detail how drunken Black and Tans and Auxies attacked the firemen, set fire to buildings, looted and attacked civilians, providing times, places, and other details.

Here are a couple of examples to give an idea of the type of information gathered immediately after the burning of Cork and published in the book in January 1921.

Fireman ‘Z’ “…went to work at the fires in Patrick Street. There he saw military and police, apparently drunk, firing indiscriminately. At about 6 a.m., when passing through Winthrop Street, he saw soldiers outside Tyler's boot shop, and also women and civilians, apparently looting.”

Another account describes the police setting fire to the Munster Arcade:

"Shortly after 10.30 p.m. I noticed about ten women and girls, probably one or two men included, emerge from Cash's door leading into Maylor Street, and bearing large bundles, some with blankets around them went down Maylor Street towards Parnell Place. In or about 11 p.m. I saw four uniformed R.I.C. policemen, armed with rifles, and three civilians, come on George's Street from Robert Street (seemingly after coming from Patrick Street). There was no one else in George's Street. They fired some shots and several bombs, the shots presumably to frighten away watchers from the adjacent windows, and the bombs to wreck the hoarding around the Munster Arcade. This hoarding they attacked with crowbars or some such instruments like them. I heard at this time the noise of a motorcycle travelling from the South Mall direction and stopping in or around Robert Street. Immediately after, I saw the police and men in civilian attire, throw tins of something (in or about the size of a two-gallon petrol tin) into the Munster Arcade, and a few minutes afterward the whole place was in ablaze. The police and the men in civilian attire then proceeded up George's (Oliver Plunkett) Street towards the Grand Parade.”

The publication of 'Who Burnt Cork City?' countered the official government propaganda issued by the British government (what would now be derided as 'fake news'). By the end of March 1921 the main unit from the RIC’s Auxiliary Division that was involved, K Company, had been disbanded. By July 1921 a truce had been agreed between the British government and the IRA. Professor O’Rahilly’s attention was then turned to events in Belfast where similar propaganda was being used to obscure the truth of what at the time was called ‘the Belfast pogrom’ (you can read more about that here).

So it turns out #fakenews isn’t a modern invention at all.

The book 'Who Burnt Cork City?' has recently been reprinted and is available here on Amazon.