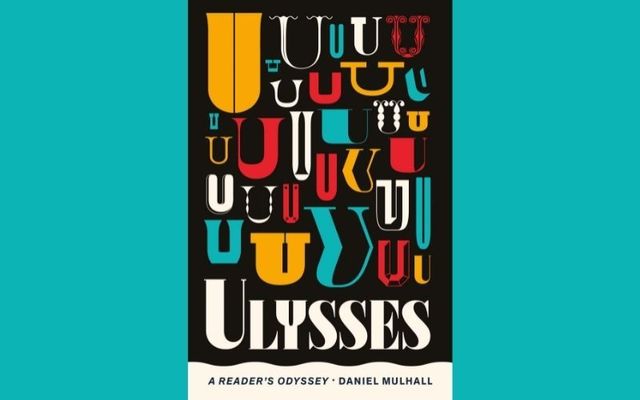 "Ulysses: A Reader's Odyssey" by Ireland's Ambassador to the United States Daniel Mulhall was published this month by New Island. New Island

Editor's Note: Ireland's Ambassador to the US Dan Mulhall has gained a wide reputation as a literary ambassador too, quoting Irish authors in his frequent tweeting and bringing beloved snippets of Irish literature to light. Now he has written a book explaining the importance of Joyce’s Ulysses not just to the literary canon but as a  means of explaining Irish history and heritage too.

Irish Americans and lovers of Ireland will enjoy this new book by Dan Mulhall because it brilliantly illustrates the timeless qualities and charms of Ireland that are on show in James Joyce’s novel, "Ulysses."

Mulhall, Ireland’s Ambassador to the United States, writes that “you cannot fully come to terms with the origins of modern Ireland without grappling with its most complete depiction in literature.”

This year, 2022, marks the centenary of both the publication of "Ulysses" and the establishment of the independent Irish state. Both events mark the end of an old colonial era and the beginning of a new century when Ireland and Irish artists would assert themselves on the world stage.

Ireland still has a lot of the atmosphere, speech, poetry, and language so well brought to life in "Ulysses." You could go into a pub in Dublin and you will find people there straight out of the novel, talking and discussing the latest racing results or politics as do Joyce’s characters in the episode "Cyclops."

"Ulysses" is a book that many people have on their shelf, but which they haven’t finished because they were flummoxed by Joyce’s stream of consciousness, changing styles, and unexplained historical and philosophical references. As Edna O’Brien has written, “'Ulysses' is the quintessence of everything he had seen, heard and overheard, consecration and desecration, full of consequence and inconsequence.”

Ambassador Mulhall cleverly decodes all 18 episodes of the novel, providing personal and funny insights that contextualize and illuminate Joyce’s text, making you want to pick up "Ulysses" again. He refreshingly gives us permission to skip some chapters and read six of them for “some tasty sampling” that will whet the appetite for more.

As Mulhall writes, the episodes can be read as more or less self-contained short stories dwelling on the lives, wanderings, and inner thoughts of three principal characters over the course of 18 hours in Dublin on 16 June 1904: Leopold Bloom, the 37- year-old advertising salesman and son of a Hungarian Jewish immigrant, his wife Molly, a vivacious opera singer, and Stephen Dedalus, a brilliant, if bumptious, young student modeled on the young Joyce.

Irish history and the lives of ordinary Dubliners on the cusp of Irish independence are vividly portrayed through the inner musings of these three characters and their interaction with a host of other characters.

“The reason Bloom is such a compelling character,” Mulhall argues, “is because we recognize bits of ourselves in some of his stray notions.” Bloom and Molly have a complex marriage; he is consumed in the novel by Molly’s affair with her concert manager, Blazes Boylan, but is unwilling to confront either person about it. Molly is still in love with Bloom but is flattered by Boylan’s attention to her body and to her singing career. One hundred years ago, "Ulysses" was banned in America and Ireland because of its sexual content, which by today’s standards are fairly tame.

Not only is "Ulysses" a monumental work of literature, but it is a significant advertisement for Ireland, attracting people from multiple countries and backgrounds. Mulhall explains that he has spent “four decades travelling the world with Irish literature as part of my diplomatic baggage, actual and intellectual. My copy of 'Ulysses,' purchased in 1974, and my edition of Yeats’s Collected Poems, acquired in 1976, have both crisscrossed the globe with me.”

He has used both books to present Ireland to people whose interest in Ireland often stems from an affinity with our literature, history, and music (the affinity diaspora). Indeed, in Mulhall’s first diplomatic assignment to India in 1980 where he met and married his wife Greta, a charming Australian diplomat, he found that both Yeats and Joyce gave him access to the top Indian families such as that of prime minister Nehru who were greatly influenced by Ireland’s freedom struggle and literature.

Subsequently, he carried the two writers with him in Vienna, Brussels, Edinburgh, Kuala Lumpur, Berlin, London, and Washington to great effect.

Mulhall’s deployment of Joyce and Yeats around the world is a masterly example of exercising “soft power” on behalf of Ireland, a term Harvard Professor Joe Nye coined in the late 1980s to mean the ability of a country to persuade others to do what it wants without force or coercion. Ireland might not have a large security force, but it does have an army of fabulous writers, poets, musicians, and artists who, with our talented diplomats, enable Ireland to punch above its weight in the international arena.

This was amply illustrated last year when Ireland’s successful campaign for a seat on the UN Security Council, brilliantly led by the Foreign Minister Simon Coveney and Ireland’s UN Ambassador Geraldine Byrne Nason, was supported by Bono and by outstanding poets like the late Eavan Boland.

Why has "Ulysses" become if anything more popular 100 years after its publication? Perhaps the answer lies in the fact that it is not only an extraordinary work of imagination, but, as Mulhall states, “despite all the adversities that beset him, his son’s death, his father’s suicide, his wife’s infidelity, his lack of commercial success, the resentment directed at him by his fellow Dubliners—Leopold Bloom is ultimately a life-affirming character, and 'Ulysses' a life-affirming novel.” It is Joyce’s genius that he manages to pull off this feat in a unique and timeless novel.

Our thanks must go to Dan Mulhall for his enthusiasm for the living document that Joyce has left us, and for making "Ulysses" more accessible to regular readers. "A Reader’s Odyssey" is certainly a book that would be a timely gift for your friends or family leading up to the St Patrick’s Day celebrations.

*Ted Smyth, a former diplomat and business leader, is President of the Advisory Board of Glucksman Ireland House, the center for Irish and Irish American Studies at New York University.