This will be the only time Ireland will hold the presidency of the UN Security Council during its current two-year term. 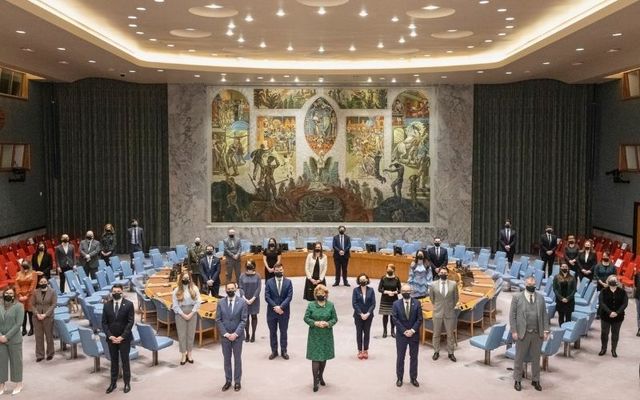 The presidency of the council is held by each member state for one month, with Ireland taking the spot for the month of September.

This will be the only time Ireland will hold the Presidency during its two-year term on the UN Security Council.

The Security Council has fifteen members and its primary responsibility is for the maintenance of international peace and security.

During September, Ireland will manage the program of Council business and chair the Council’s meetings.

Today Ireland begins a new role on the #SecurityCouncil:

Issues on the agenda of the Security Council in September include the evolving situation in Afghanistan, the UN-led peace process in Libya, the Council’s monthly meeting on the Middle East Peace Process, and the situations in Syria, in Yemen, in Sudan, and in South Sudan.

Ireland will also host a number of meetings linked to key priorities for our term on the Council: on peacekeeping, on climate and security, and on the 25th anniversary of the Comprehensive Nuclear Test Ban Treaty.

Ireland's Ambassador to the United Nations Geraldine Byrne Nason is expected to hold a press conference at UN headquarters in New York to outline Ireland's priorities for its presidency.

"We sought a seat on the UN Security Council to make a difference; to bring a principled, constructive and open approach to its vital work of promoting international peace and security, including at critical and challenging times such as this.

"I look forward also to chairing a meeting of the Security Council on 23 September on the critical issue of Climate and Security. The effects of climate change are a contributory factor in a range of the crises on the Council’s agenda."

Today, Ireland takes over the Presidency of the UN Security Council 🇮🇪🇺🇳

As President, we will steward the Security Council’s work on challenges such as Syria, Afghanistan, and the Middle East. #IrelandUNSC @irishmissionun

While Minister for Foreign Affairs, Simon Coveney said,  "As President of the Security Council, we have the responsibility of stewarding the Council’s important work at a critical moment. I look forward to Council discussions on a number of key issues on the international agenda.

"Next week I will be in New York to chair a Council meeting on how we can better manage the transition of UN Peacekeeping Operations to a more comprehensive UN engagement on peacebuilding in countries coming out of conflict.

"We need to ensure that hard-won peace gains are not lost when the peacekeepers leave. I am proud of the history of Defence Forces’ participation in UN peacekeeping which informs Ireland’s work on this issue."

It’s a huge honour to be entrusted with holding the Presidency of the #UNSC for the month of Sept.- big month ahead for #Ireland at the #UN focusing on #Afghanistan #Ethiopia #Climate #Peacekeeping #Disarmament #HumanRights @irishmissionun https://t.co/z8XWy1tUt4

Ireland began a two-year term on the UN Security Council in January of this year after being elected by fellow member states in 2020.

Since taking up its seat on the council, Ireland has led a push to highlight the humanitarian crisis in Ethiopia's Tigray region.

The country has been tasked with managing access to crucial humanitarian aid in Syria and has also been appointed as a facilitator in the efforts to restore the Iran Nuclear Deal.

Since joining the United Nations in December 1955, Ireland has previously served on the UN Security Council three times.