Ireland's Ambassador to the UN Geraldine Byrne Nason said: "We are here to make a difference, not to make up the numbers." 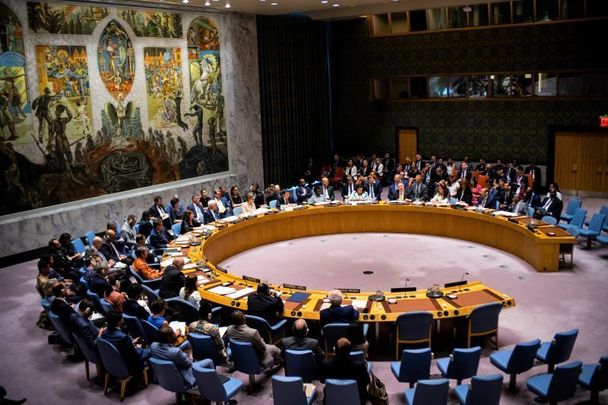 Ireland has officially taken its seat on the UN Security Council after winning the position during a vote in June 2020 following a massive campaign.

Ireland, who officially begun its new two-year, nonpermanent term on the UN Security Council on January 1, 2021, engaged in a meeting on chemical weapons in Syria on January 5 and will later this week take part in an open debate on maintaining peace in fragile contexts.

Following Tuesday's meeting about chemical weapons in Syria, Ireland's Ambassador to the UN Geraldine Byrne Nason said: "Ireland unequivocally condemns any use of chemical weapons at any time, anywhere.

"The marked increase in the use of chemical weapons in recent years is deeply disturbing.

"This shows that the framework against the use of these deadly weapons is under threat. Everyone here has the responsibility to address that."

The first meeting of the UN Security Council this year comes the day after Council President Tarek Ladeb of Tunisia formally welcomed Ireland, as well as India, Kenya, Mexico and Norway, to their new term and expressed hope that they will add impetus to the 15-member organ’s work.

The presidency of the UN Security Council rotates on a monthly basis, Ireland will assume the role in September 2021.

On January 4, Ireland’s Ambassador to the UN Ambassador Geraldine Byrne Nason installed the Irish tricolor outside of the UN Security Chamber in New York City.

"As my country Ireland's flag joins the flags of other Security Council Members for just the 4th time in my country's history, I have a deep and profound sense of humility and responsibility"

During the ceremony, Ambassador Byrne Nason remarked: “As my country Ireland’s flag joins the flags of other Security Council Members for just the fourth time in my country’s history, I have a deep and profound sense of humility and responsibility.

“The challenges that face every new group of elected members are different. Unique in their own way. However, can there ever have been a group that faces such momentous times? The challenges related to COVID-19 are unique. We have watched the Council struggle over the last year, and it will undoubtedly shape our time on the Council.

“Across the world today, we know that there are millions of people living in fragile contexts that risk being pushed over the edge by the knock-on effects of the COVID pandemic.

“Economic collapse, food insecurity, the opportunism of terrorists and non-state actors all risk the hard-fought-for gains of people already suffering in unstable situations.

“Those women, those men, those young girls, and boys are looking to us, to the Council, with hope and expectation.

“So it is with these people in mind, and those trapped in protracted crises such as Syria or Yemen, that Ireland is coming to the table, with hope and expectation too.

“My government is clear. We are here to make a difference, not to make up the numbers.

“On the Council, we are determined to work every day to ensure that the Security Council itself meets its responsibility not only to alleviate, but hopefully, to resolve conflict. In my own language, in the Irish language we say:

“That means we rely on each other for shelter. People need each other. That’s the Irish spirit we will bring to the Security Council. As we log-on each morning now for our virtual Security Council meetings, hopefully soon in person, I wish that we all remember the hope of others for a safe and peaceful future, and that it rests with us.

"I certainly will. Thank you."

You can watch the January 4 installation ceremony of the national flags of the countries of the newly-elected non-permanent members to serve on the United Nations Security Council for the term 2021-2022 here:

Ireland and the UN Security Council

On June 17, 2020, Ireland officially won a two-year, nonpermanent seat on the United Nations Security Council. Ireland was in a pool with Norway and Canada for the vote, which required a two-thirds majority of 128 votes to win. Ireland won 128 votes, Norway won 130, and Canada, who ultimately lost out on a panel seat, received 108.

The election to the Security Council seat was the culmination of Ireland’s “mammoth” bid that was first launched back in 2018 and drew support from figures including President Michael D. Higgins, former President Mary Robinson, U2's Bono, and support was even shown at a performance of Riverdance at Radio City Hall in March.