President Higgins reiterated Ireland's position on the need for a sovereign Palestinian state. 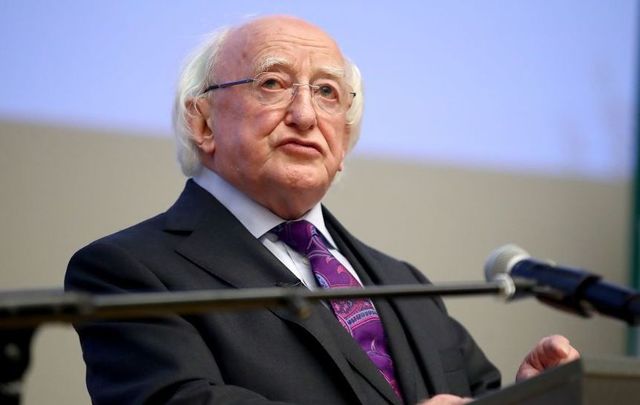 Irish President Michael D. Higgins delivered his National Statement for the Republic of Ireland at the United Nations General Assembly in New York on Wednesday evening in which he touched on the crisis of climate change, the humanitarian response to forced migration and the Israeli-Palestinian conflict.

"Climate change is moving so much faster than the efforts we are expending or enlisting to address it," the president enforced in a wide-ranging address that also took in the importance of the United Nations, the importance of equal rights for young people, and the need to reform the UN Security Council.

"Climate action is essential if we are to achieve the Sustainable Development Goals," he added.

"The cost of inaction is catastrophic, far greater than what it will cost us to set out on a truly meaningful, corrective path.  With the Paris Agreement, we have both the framework and the foundations to move forward."

In the margins of the #UnitedNations General Assembly meeting in #NewYork, President Higgins met the President of Lebanon, H.E. Michel Aoun, to discuss the President’s visit to #Lebanon, this October.

On Tuesday evening, President Higgins had also commented on the Paris Agreement in a speech delivered in New York University, calling on the US to rethink their withdrawal from the climate agreement.

As he had in NYU, on Wednesday the president again reiterated Ireland's support and respect for the United Nations, declaring that "for my country, Ireland, the UN anchors our foreign policy, and its Charter, institutions, and personnel constitute a prism through which we view our situation in the world and how we wish our practices to be perceived and judged.

"We view the UN as that place where newly free nations found a home after their struggles for independence, their emergence from the shadows, legacies, and distortions of imperialism. We see the UN as a forum that has been provided to give a voice to the voiceless, the marginalised and those lacking power and wealth.  For so many, it is the only such forum available to them – and it is all-the-more important for that."

A focus of his national address included comments on the Israeli-Palestinian conflict, reinforcing Ireland's belief in the need for an independent and sovereign Palestine. He explained that the standing is rooted in Ireland's "experience of prolonged, intractable conflict – and of the painstaking work and compromises which pave the way for a peace settlement.

"For this reason, the Israel Palestine conflict resonates deeply with the Irish people," he added.

"In the case of Israel and Palestine, we are more than ever convinced that the needs of both peoples can only be fully achieved through two independent, secure and sovereign states, co-existing side by side, in mutual recognition and peace."

What are your thoughts on President Higgins' speech? Let us know in the comments section, below.