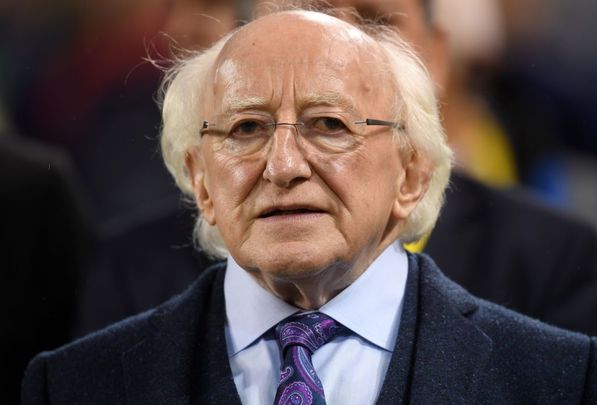 Ireland's President Michael D. Higgins placed blame on "growing narcissism, aggressive individualism and an emphasis on insatiable consumption and wealth accumulation" for the manner in which the world is reacting to current global crises.

Speaking in New York University on Tuesday evening, President Higgins delivered a speech "On Responding to Interacting Crises of Our Times - Ecology Economy and Society," in which he called for greater empathy in the discourse surrounding humanitarianism and the migrant crisis.

"We have to craft anew the space of hope if we are to achieve change, and do it together, for we have seen in our world a profound erosion of solidarity," the President told a packed hall.

"It is a value and test of our practices – the solidarity test – that we must re-establish urgently across all our peoples and our policies."

Listen to the speech delivered by President Michael D. Higgins in New York:
"On Responding to the Interacting Crises of Our Times – Ecology, Economy and Society."https://t.co/BrcKsfXIpg @GIHNYU @nyuniversity @irelandinny pic.twitter.com/3WxyTK0QZq

He continued to emphasise his belief that co-operation has become one of our "neglected founding values," adding that it "remains the great alternative to extreme individualism."

President Higgins also stressed the importance of communications which he stated "has become highly relevant in the current context of the re-emergence of stereotypical depictions of migrants and displaced individuals from poorer, developing parts of our planet, depictions that emanate too frequently from the destructive rhetoric of the most powerful seeking to galvanise vulnerable, often desperate and marginalised groups with a language of fear of the Other that is often racist, xenophobic and grounded in hatred, fear and ignorance.

"These are depictions that have no basis in fact, rationality or reality, and that offend against our very humanity and that of others," he added.

The President's speech came ahead of Ireland's national address to the United Nations General Assembly which he will deliver on Wednesday evening. He began his NYU speech by reaffirming Ireland's commitment to the UN, claiming that the shared sense of responsibility guided by such an institution is what is needed when "the global challenges we now face emphasise this as they do not respect any geographical boundaries."

The President will deliver an address at the University, on the interacting crises of our times: ecology, economy and society.https://t.co/BrcKsfXIpg pic.twitter.com/Wd9UUk3WA6

He said: "Like the United Nations itself, modern Ireland came out of conditions of conflict.  Ireland’s escape from a colonial past was long and painful, thus our history is one which allows us to empathise with so many countries in the United Nations.  Like them, our UN membership, too, has shaped our development.

"In recent times, however, the United Nations has suffered from a sustained campaign of criticism.  Some of it fair and so much more, however, is unjust and comes from an insidious agenda.   Those who believe in the UN are forever being forced, called upon, to find new ways to show that its work is relevant, that what the UN does is making a critical difference to the citizens of the world’s most impoverished and unstable countries – all of this within the context of a competition for news space in the modern sound-bite driven media age of clickbait headlines that feed on shrinking attention spans."

This week the UN also hosts a Climate Action Summit which has received much attention with thanks to teen activist Greta Thunberg and US President Donald Trump's reaction to her speech.

Higgins was quick to criticize some of the recent US approaches to climate change stating: "Of course, in this regard, it would be remiss of me not to state my profound disappointment at the United States’ decision to exit the Paris Agreement. I do urge the United States Government to revisit and reconsider this decision to exit the Paris Agreement, a decision which could take effect from November next year.

"Unless we collectively take action to prevent catastrophic climate change, together with a real commitment and transfer of resources towards assisting communities to prepare for, and adapt to, changing climates, these population flows, driven by climate shifts, will take place in a context of old, revived and emerging new conflicts becoming available to be exploited by extremists."

Do you agree with President Higgins? Lets us know in the comments section, below.