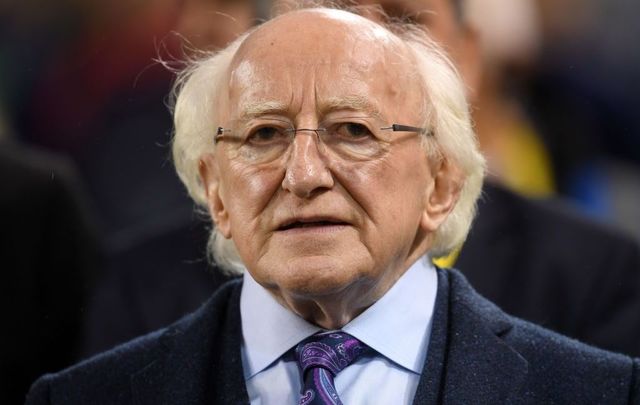 Michael D. Higgins, President of the Republic of Ireland looks on ahead of the UEFA Nations League B group four match between Ireland and Denmark at Aviva Stadium on October 13, 2018, in Dublin, Ireland. Mike Hewitt/Getty Images

Irish President Michael D. Higgins arrives in New York on Monday, September 23, ahead of a packed week of engagements and an address at the United Nations General Assembly.

Throughout September 25-27, President Higgins will undertake a series of high-level bilateral meetings at the United Nations before delivering Ireland’s national statement to the UN General Assembly on Wednesday evening (EST).

The President's visit is said to be a significant opportunity to raise Ireland’s profile at the United Nations and to underscore the importance which Ireland attaches to the UN and the multilateral system.

On Tuesday, President Higgins will give a keynote address at New York University, a private research university founded in 1831.https://t.co/BrcKsfXIpg @nyuniversity pic.twitter.com/80f1NlzGAx

In addition to the high-level meetings at the United Nations, President Higgins will attend a number of events with the Irish diaspora in New York. He will deliver keynote addresses at two of New York's universities: At New York University, the President will give an address on linking Ecology, Economy and Society, and at Fordham University the President will focus on "Humanitarianism and the Public Intellectual in Times of Crisis.”

In his address to the United Nations on Wednesday, President Higgins will build on the themes from his speech at @nyuniversity tomorrow, making the case for multilateralism and action on climate change.https://t.co/YQWZaV41Ex pic.twitter.com/wKzLFzvP7L

On the final day of his visit to New York on Monday, September 30, President Higgins will unveil a new sculpture by John Behan, commissioned by the Permanent Mission of Ireland to the UN, and participate in a public interview in the New York Public Library, moderated by Dan Barry.

We are proud to announce that Irish naval vessel the L.É. Samuel Beckett will visit NYC during UN General Assembly week! All are welcome to tour the ship and meet the crew on Sun 29 September between 10am and 5pm at Pier 36 in Manhattan. More details at https://t.co/QNySrVmZ11 pic.twitter.com/RK7GMs5no4

The ship will be open to visitors on Sunday, September 29, between 10 am and 5 pm. The ship will be docked at Pier 36, berth 7 and 8 in Manhattan on the East River between the Manhattan and Williamsburg bridges. Access is easy via the Pier 35 park.  Ship’s captain Lt Cdr Eoin Smyth and the crew welcome visitors of all ages to visit and tour the ship and to speak with the crew about their service to Ireland and their humanitarian missions in the Mediterranean. You can find more info here.