An Garda Síochána, which had been set up with a unique emphasis on its relationship with the community through having an unarmed policing approach, finds itself in an unenviable position. 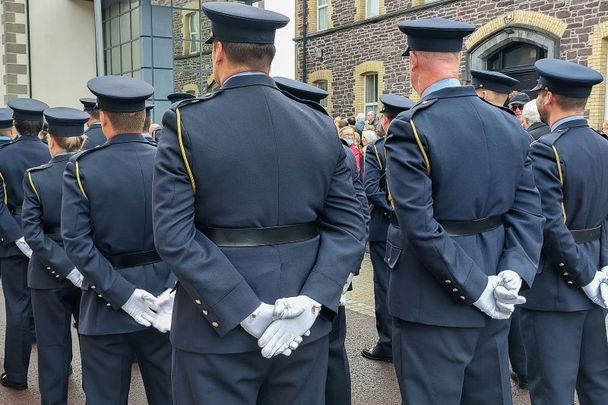 October 14, 2022: A Garda parade on Lady Lane in Waterford City to celebrate the 100th anniversary of the day the Garda Siochana first arriving the city. RollingNews.ie

2022 year marks the 100th anniversary of the setting up of Ireland’s police force, An Garda Síochána. Around the country, civic events, from marching bands to open days, have been held to celebrate this anniversary and thank them for their contribution to the state.

Sadly, in the past few weeks some residents in a Dublin suburb, Ballyfermot, did not get that memo.

Last weekend, a routine call-out to deal with a brawl that had developed outside a pub at closing time saw two members of the gardai dispatched to deal with it. What happened next sickened the nation and has led to a lot of soul-searching as to the nature of policing in the Ireland of today and the resources that are needed to maintain law and order in a society that increasingly has no fear or respect for the criminal justice system or those who are charged to uphold it.

When the gardai, one male and one female, arrived on the scene they were turned on by a small number of people. The male garda was brought to the ground and struck violently around the head with his own torch; the female officer was also struck as she tried to intervene. Both ended up in hospital. The callousness of it all was captured on a sickening social media video.

This was in the wake of another incident that also happened in the Ballyfermot area in September when a garda car was rammed by teenage hooligans and two female officers were left severely traumatized. It was also captured on social media with some onlookers heard cheering.

The garda, which had been set up with a unique emphasis on its relationship with the community through having an unarmed policing approach, now finds itself in an unenviable position. What should its response be to what were very visible direct challenges to its authority – not, it must be said, from paramilitaries or drug gangs, but from low-level teenage joy riders in one case and a drunken faction in the other.

The political response from the Minister for Justice Helen McEntee was predictable. On both occasions, she was “appalled.”

This is a word she frequently uses and clearly mistakes as a sign of strength and a commitment to action. It’s neither, and the minister needs to know that when decisive action is required, feeble words and trite phrases are not enough.

Aware of the criticism of his Fine Gael colleague Tanaiste Leo Varadkar, in a classic case of deflection, said last weekend he would support the arming of rank and file gardai. The Garda Representative Association (GRA) in response said they were not seeking this but did want body cams and tasers, which are within the gift of the Department of Justice but have been held up for various reasons including “civil liberties” concerns.

According to the GRA, the immediate problems for the gardai can be boiled down to one overriding factor which is lack of resources. At their annual conference earlier this year, they highlighted the “pitiful equipment and technology” which in some cases was almost 30 years behind where it should be, as well as low morale and manpower shortages with over 300 less gardai in the force compared to two years ago.

There is no doubt that the 21st century has been a difficult and challenging time for the force. A variety of reports and tribunals identified widespread malpractice within its ranks.

The Smithwick Tribunal, the Morris Tribunal, the O’Higgins Commission of Investigation, and the Disclosures Tribunal all highlighted problems including collusion with the IRA, witness and evidence tampering, bullying and poor internal management. The period has also seen the shock resignation of two garda commissioners and a minister for justice.

In response, an independent complaints body (GSOC), an independent garda inspectorate and the civilian Policing Authority have all been set up. While this has led to more accountability, it has also added hours to what some officers say are inefficient administrative and investigative processes.

Most observers agree that the current Garda Commissioner Drew Harris has effectively tackled the cultural issues within the organization, and he has had his term in office extended until 2025. The challenge now is operational effectiveness.

There have been notable successes in recent years. Thanks to international cooperation, a lid has been put on the bloody feud between the Kinahan cartel and the Hutch gang which has cost over 18 lives.

The so-called trial of the century currently taking place in Dublin shows the length and depth the gardai have gone to to bring prosecutions in that dispute. Similar warring factions in Limerick and Drogheda have also been dealt with.

However, headline figures for crimes such as kidnapping, theft, attempts to murder, and sexual offenses have continued to rise, and public representatives have claimed the center of a number of our major cities including Dublin, Cork, and Limerick have become no-go areas after dark. A range of new offenses, such as cybercrime with a transnational element, are taking up resources and time, and there is an increasing focus on gender-based violence.

Garda members, like many other victims of crime, often express a frustration that penalties imposed on assailants are unduly lenient and do not reflect the severity of an attack.

Nearly 100 years ago, the first commissioner, Michael Staines said, “The Garda Siochana will succeed not by force of arms or numbers, but on their moral authority as servants of the people.”

But that no longer holds. This is a changed Ireland and the recent events in Ballyfermot show that moral authority is not enough on its own.

Without overwhelming resources and appropriate equipment, members of the force are on a hiding to nothing. Slowly – too slowly – that penny is beginning to drop in the corridors of power.

(Correction: In my column “Poppy Politics and Irish Pride,” (November 16-22) I mentioned the need to be careful when dealing with past legacy issues and historical commemorations. Well, I should have followed my own advice as in that column I said that former Minister for Justice Charlie Flanagan planned to commemorate the Black and Tans. It has been pointed out to me that at all stages Flanagan stated that the Black and Tans were excluded from a planned event to remember the RIC and the Dublin Metropolitan Police and indeed the record shows that that is so. I am happy to straighten that particular record, but it does of course prove the point of the article that in dealing with such events and the various nuances, we are all walking on eggshells.)

*This column first appeared in the November 0 edition of the weekly Irish Voice newspaper, sister publication to IrishCentral. Michael O'Dowd is brothers with Niall O'Dowd, founder of the Irish Voice and IrishCentral.