After years of investigation US and Irish authorities crackdown on an Irish internationally operating gang, The Kinahans. 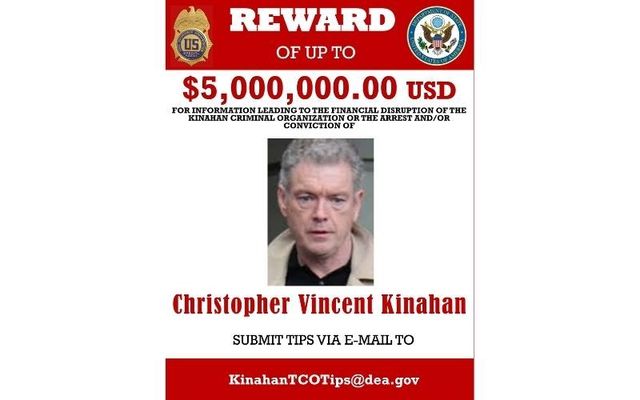 WANTED: Christy Kinahan. A reword of $5 million has been issued for information on these Irish criminals. Garda Info / Twitter

The United States government is imposing financial sanctions on the Irish gang, The Kinahans, and offering the public $5 million for information on their criminal activities.

The US government has announced that it will impose financial sanctions on seven senior members of the Kinahan crime gang in a bid to target their criminal operations.

Speaking at Dublin City Hall on Tuesday morning, the US Ambassador to Ireland, Claire Cronin also announced that the US Department of the Treasury is offering a reward of $5 million (€4.6 million) for information that will lead to the “financial destruction” of the gang or the arrest and conviction of its leaders.

Ireland's Garda Commissioner Drew Harris said the gang is worth more than $1.08 billion.

Harris warned the Kinahan gang members that they "can’t hide from justice forever." He said they will eventually run out of money.

An Garda Síochána & international law enforcement partners are today launching an initiative tackling the apex of the Kinahan gang. pic.twitter.com/3zb72XMHOv

“The Kinahan Organized Crime Group smuggles deadly narcotics, including cocaine, to Europe, and is a threat to the entire licit economy through its role in international money laundering,” said Under Secretary for Terrorism and Financial Intelligence Brian E. Nelson.

“Criminal groups like the KOCG prey on the most vulnerable in society and bring drug-related crime and violence, including murder, to the countries in which they operate. Treasury is proud to have coordinated so closely with our international counterparts, and the U.S. government will continue to use every available resource to dismantle these criminal networks.”

Reward of up to $5,000,000.00 USD for information leading to the Financial Disruption of the Kinahan Criminal Organisation or the arrest and/or conviction of:
Daniel Kinahan
Christy Kinahan Sr
Christy Kinahan Jr

Who are the Kinahans?

The KOCG, which operates in Ireland and is also established in the United Kingdom, Spain, and the United Arab Emirates, was designated as a significant transnational criminal organization. The KOCG emerged in the late 1990s and early 2000s as the most powerful organized crime group operating in Ireland. Since then, Irish courts have concluded that the KOCG is a murderous organization involved in the international trafficking of drugs and firearms.

Criminal activities of the KOCG, including international money laundering, generate proceeds in the United Kingdom, which are then pooled together and passed to local criminals before being handed to Irish organized crime group members and laundered out of the United Kingdom. The KOCG also frequently uses Dubai as a facilitation hub for its illicit activities. Since February 2016, the KOCG has been involved in a gang war with another group in Ireland and Spain, resulting in numerous murders, including two innocent bystanders.

Irish national Christopher Vincent Kinahan Senior (Christopher Sr.), currently based in Dubai, was designated for acting or purporting to act for or on behalf of, directly or indirectly, the KOCG. Demonstrative of a long history of criminality, Christopher Sr. has served prison sentences in Ireland, the Netherlands, and Belgium, including six years for dealing heroin, two-and-a-half years for possession of cocaine, and four years for money laundering.

A European Arrest Warrant has been issued for his arrest relating to offences of Murder and Directing & Participating in a Criminal Organisation. pic.twitter.com/QxricY7AAN

Irish national Daniel Joseph Kinahan (Daniel Kinahan), currently based in Dubai, was designated for acting or purporting to act for or on behalf of, directly or indirectly, the KOCG. Each member of the KOCG reports to Daniel Kinahan, who is believed to run the day-to-day operations of the organization.

The sanctions, OFAC says, are the result of close collaboration between it, the US Drug Enforcement Administration (DEA), the US Department of State, US Customs and Border Protection, An Garda Síochána, the United Kingdom’s National Crime Agency (NCA), and the European Union Agency for Law Enforcement Cooperation.

It is believed today's actions are the culmination of more than three years of work by the law enforcement agencies involved.

Any tips on The Kinahan's operations or whereabouts can be emailed to KinahanTCOTips@dea.gov.