Two gardaí members were "seriously assaulted" in the Ballyfermot area of Dublin on November 21, leading to four arrests. 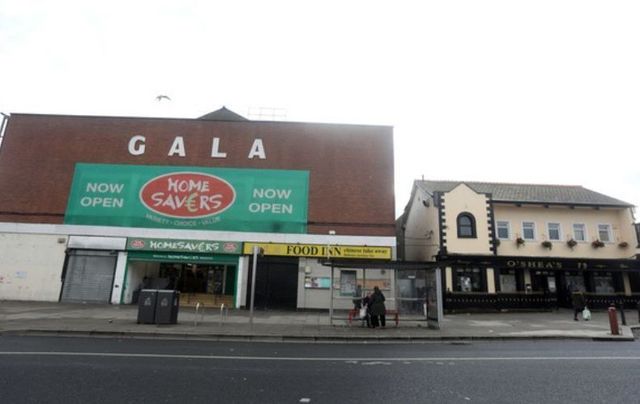 November 21, 2022: The scene outside the Gala home savers shop and O'Shea's pub where an attack took place on two members of the Gardaí in Ballyfermot, Dublin. RollingNews.ie

Gardaí have arrested another man, aged in his 40s, in relation to the public order and assault incident which occurred at a licensed premises on Ballyfermot Road in Dublin in the early hours of Monday, November 21.

Gardaí said in an update on Monday afternoon that the woman (50s) who was arrested in relation to this incident has been charged and released from custody. She is scheduled to appear before the CCJ at a later date.

The two Garda members assaulted during the course of this incident have now been discharged from hospital. Both members are receiving support from their colleagues and local Garda Management and the wider Organisational Supports of the Peer Support Service, Chief Medical Officer, and 24hour counselling service have been provided if required.

In an earlier update, An Garda Síochána said on Monday that two of its members responded to a call concerning a public order incident at a licensed premises on Ballyfermot Road in Dublin at approximately 12:45 am on November 21.

On arrival at the scene, the two members of An Garda Síochána (a male and a female) engaged with a number of individuals on the street.

In the course of dealing with the incident, both members were assaulted by a number of persons that were present and called for assistance from nearby colleagues who arrived within a very short period of time.

Two males suspects, one aged in his 50s and one in his 30s, were arrested at the scene for assault contrary to the Non-Fatal Offences Against the Person Act 1997 and are currently detained at Ballyfermot Garda Station in accordance with the provisions of Section 4 Criminal Justice Act 1984.

A female suspect aged in her 50s was also arrested at the scene for offences contrary to the Criminal Justice (Public Order) Act 1994.

Speaking about the incident involving the members of An Garda Síochána, Assistant Commissioner Angela Willis, Dublin Region stated: "My thoughts this morning are with our two colleagues from Ballyfermot who were viciously assaulted last night whilst going about their normal duties, protecting communities in the Ballyfermot area.

"I absolutely condemn the actions of the individuals involved in this serious incident and wish the members that were injured a full and speedy recovery."

Gardaí have also asked that any footage of the incident not be circulated further on social media.

Taoiseach Micheál Martin described the attack as "reprehensible", adding that he utterly condemns the incident.

The Taoiseach said there can be no tolerance for such incidents when members of An Garda Síochána were putting their lives on the line to protect the community.

Antoinette Cunningham, the General Secretary of the Association of Garda Sergeants and Inspectors (AGSI), called on Minister for Justice Helen McEntee to introduce mandatory sentencing for people who assault mandatory workers as a deterrent for future attacks.

"There has to be a deterrent there to say that if you assault an emergency worker, gardaí, fire brigade or an ambulance worker in the course of their duty, then that will receive the mandatory sentence by the courts," Cunningham told RTÉ's Today with Claire Byrne.

"To see colleagues on the ground, being kicked, beaten, and assaulted while bystanders stand there and film it is absolutely shocking."

In a statement on Twitter, Minister for Justice Helen McEntee described the attack as "appaling" and said it would not be taken lightly.

"I am already increasing sentences for assault - and I will not hesitate to take further action to protect our Gardaí and front-line workers."

This appalling incident will not be treated lightly.

I am already increasing sentences for assault - and I will not hesitate to take further action to protect our Gardaí and front-line workers.