Listen: 43rd anniversary of Whiddy Disaster when 51 were killed in an explosion off Cork

Time runs out for Irish Government as the High Court application to change death certificates to "unlawful death" is imminent. 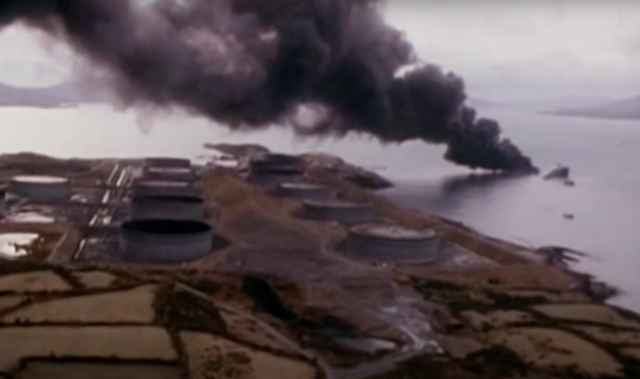 Seven Irish were among the 51 souls who lost their lives on Jan 8, 1979, when the MV Betelgeuse exploded. Here the son of one of the deceased calls on the Irish government to apologize for these "unlawful" deaths.

The newest RTÉ Radio 1 Documentary On One, "Fire in the Sky" featuring former President of Ireland, Dr. Mary McAleese, tells the story of the night of the Whiddy Island disaster. In January 1979, a French oil tanker known as the M.V “Betelgeuse” arrived in Bantry, West Cork. The tanker was re-routed to Cork to unload her Arabian Crude oil.

In the early hours of Mon, Jan 8, a fire broke out, no one was saved. Fifty people died including my father, Tim Kingston. In all, 51 people died, 42 French citizens, one British citizen, one Dutch citizen and seven Irish citizens.

In the Documentary On One: Fire in the Sky, the story of the night is being told to listeners across Ireland and the world. It first aired on 02 October 2021 and is being repeated in advance of the 43rd anniversary of the disaster.

In October, the French-Irish Association of Relatives and Friends of the Betelgeuse requested an appropriate lengthy, honest, and heartfelt State apology for the families, workers, rescue services and the residents of Whiddy Island who were forced into terrible danger unnecessarily due to breaches of safety and the State failure to ensure safe operations, and for the people of Bantry and West Cork. The families asked An Taoiseach [Irish leader] Micheál Martin to offer this (by agreed wording) in Dáil Éireann and to urgently carry out a root and branch review of Ireland’s current failure to implement international maritime regulation.

The families have waited for 43 years for an apology by the State, and for regulation to be implemented in a timely manner. No apology was forthcoming, and An Taoiseach failed to even consider the matter. Accordingly (as per the below email) the families have ended communication with the Government, in advance of imminent High Court action.

The deaths of our loved ones were "unlawful" under Irish law in 1979 and we are applying for the Irish State to rectify the death certificates pursuant to the "Right to Life" provisions of Article 2 of the European Convention of Human Rights, and of Bunreacht na hÉireann to state, "unlawful death". This has been established in respect of other disasters in Europe [e.g., Hillsborough].

This fundamental right of the victims has been ignored here in Ireland, despite obvious regulatory wrongdoing directly causative of their death, and the Government has repeatedly failed to meet to discuss this. In the absence of common decency as stated by Mary McAleese, the only thing our State understands is the rule of law and the State will now be held to account in the High Court.

Time has run out for our Government and, particularly our State officials, who lack even the smallest iota of an ember of common Irish decency and any communication will now be rejected. The media will be notified shortly before the application is submitted.

Listen to the Documentary On One: Fire in the Sky here.