To read the world’s media, you might be mistaken into believing Northern Ireland is a tinderbox these days just waiting for a new onset of The Troubles. 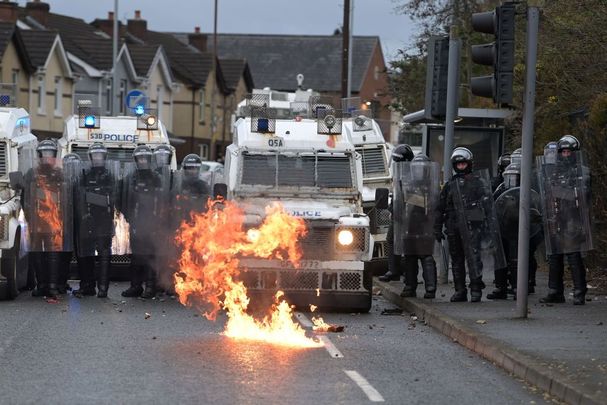 The media's loaded reporting comes as gangs of loyalist youths are petrol bombing buses and threatening extended street violence. But a resumption of The Troubles seems hardly likely. Since the Good Friday Agreement in 1998 there have been occasional outbursts such as what we are witnessing now, but the violence is of the nihilistic kind born of anger and frustration of unemployed, disaffected youth.

Lost in the general coverage is that the violence essentially began with drug raids by the Police Service of Northern Ireland (PSNI) on the homes of several leading loyalists.  It was those same drug dealers who fomented much of the violence against the PSNI.

Splinter groups on both sides, including the Real IRA, run very profitable drug businesses that have nothing to do with the partition business.  Suffice to say much of the anger is over an increased crackdown on drug kingpins.

That is not to ignore the fact that the marching season is coming up and the loyalists are about to get hot under their orange collars.

But the nationalists have long stood their ground and emerged successfully in locations like Drumcree and in Derry where some of the worst rioting used to take place.  There will be no return to the sound of the Lambeg drum marching through Catholic neighborhoods.

In fairness, unionists worked with nationalists in Derry to calm the hotheads during the marching season.

At Drumcree it cost the lives of three young children killed by a petrol bombing to bring Orangemen to their senses.  Jason, Mark and Richard Quinn were burned to death when Ulster Volunteer Force thugs threw a petrol bomb at their house in 1998.

The Brexit business has, of course, caused unionists massive problems as the more they seek to integrate, the more the English wish to move away.

Unionists never seem to learn the lesson that leaders like British Prime Minister Boris Johnson could care less about them and their endless demands as the ugly sisters of the empire.

They have only bad options, and matters could become considerably worse in May if Scotland votes in the Scottish Nationalist Party in the upcoming election as all the polls indicate.  If that happens there will be an immediate demand for a Scottish referendum on independence.

So unionism only has bad options, mostly because with the honorable exception of men like David Trimble who stood by the Good Friday accords, they have absolutely no plan or idea on what to do next.

The result is scores of disaffected youth burning buses and rioting because they claim to have been betrayed.

Something must change. The reality is that the nationalist side has to use all its persuasive powers to win over some percentage of unionism to some different kind of governance than what exists at present.

It is a herculean task.  Unionism cannot seem to grasp that the longer they stall the further they will fall because they will no longer be the dominant party electorally.

What is needed is a contest of ideas, not a new series of confrontations. The Democratic Unionist Party has but two choices -- go for an agreed outcome now or see their political clout diminish and decline.

The choice seems obvious. The petrol bomb-throwing mob has made the choice even clearer.  The time to talk has come.