St. Patrick's Day's value to the Irish American community is undeniable, so should it be a public holiday in the United States? 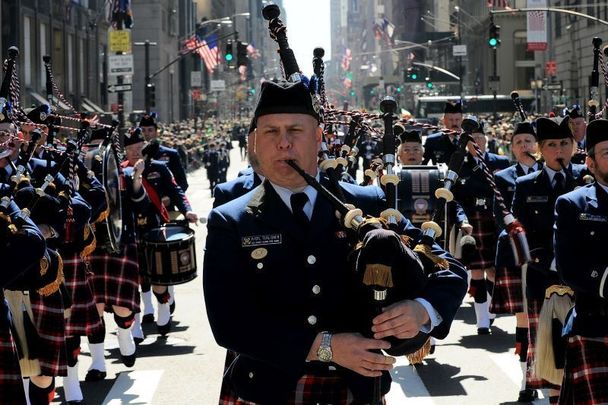 Is it time for America to recognize Saint Patrick’s Day for the very special day it is and give it a public holiday?

It's almost St. Patrick’s Day – the once-a-year occasion when the more than 70 million people of Irish descent around the world (and a good few of their friends) celebrate Ireland’s patron saint and all things Irish!

St. Patrick's Day 2022 falls during the week, so those of us with 9-5 Monday to Friday jobs aren't in the position for a full day of celebrations.

In Ireland, March 17 is a public holiday, with schools, and offices closed for a day of celebration. It is also a public holiday on the Caribbean island of Montserrat, and, interestingly, in Suffolk County, Massachusetts.

With 34.4 million Americans of Irish descent, should St. Patrick’s Day be recognized as a public holiday?

Muslim and Chinese holidays observed in NYC - why is Saint Patrick's Day not a US public holiday?

It’s a tricky question. In New York City, it was announced in March 2015 that schools will begin closing for the Muslim holidays of Eid ul-Fitr and Eid ul-Adha during the 2015 – 2016 school year.

This decision, welcomed by the city’s Muslim population, spurred leaders from New York’s Chinese community as well as a number of elected officials to petition for the Lunar New Year to be a school holiday as well and they were finally granted their request in February 2016.

"Acting on the mayor’s pledge is critical so that students no longer have to choose between their most important cultural holiday and missing class, and to acknowledge the city's ongoing change," State Sen. Daniel Squadron (D-Manhattan) said in a statement.

The very same words could apply to St. Patrick’s Day – the most important day for the Irish community in the US.

The question of a public holiday on the Catholic feast day was very much given attention again in the run-up to March 17 in 2016, as Irish-American teachers make a move to reschedule parent/teacher conferences due to take place on that day.

In February 2016, a New York teacher filed a legal complaint with the NYC Human Right Commission over the parent/teacher conferences stating that “The insensitive scheduling of parent-teacher meetings on March 17th has put me in an untenable position of choosing between my ethnic and religious heritage and my duty to help my students."

Frank Schorn, who serves as Vice-Chair of the Emerald Isle Immigration Center, filed a complaint with O’Dwyer and Bernstein law firm, in which he voiced his disappointment at being forced to abandon celebrations. “I foresee being prevented from attending any Irish cultural events on March 17th,” he said.

Before the complaint was officially filed, the Emerald Isle Immigration Center, speaking on behalf of Irish-American teachers, also sent letters to the Department of Education and Schools Chancellor Carmen Farina calling on her to reschedule the conferences.

Official US public holiday or not, St. Patrick's Day has often been a day to leave work or school early.

It is a hard decision. I remember well St. Patrick’s Day when I was in elementary school. My mother, whose employer was Irish, always had the day off, so she would pick me up from school at lunchtime to cheer on the NYC St. Patrick’s Day parade as it marched down Fifth Avenue.

I was always excited to celebrate Paddy’s Day Irish pride, bringing shamrock stickers to hand out to my classmates. I felt special and cheekily delighted at being able to leave school early, but also anxious knowing I would be marked “Absent” and that I’d be missing out on half a day of classes.

St. Patrick’s Day toes an interesting line as a Catholic feast day that has been largely embraced as a secular celebration. While it doesn’t hold the same widespread religious importance as Christmas does to Catholics or as Eid ul-Fitr does to Muslims, its value to the Irish community is undeniable. It’s our once-a-year-day, and we should all be able to celebrate – and bring our friends of other backgrounds along.

So rather than Suffolk County ending its March 17 tradition, I think more counties and states across the US should take a page out of their book.

Suffolk County’s story is instructive: In 1941, the then-governor Leverett Saltonstall signed a bill in green ink proclaiming March 17 a legal holiday - officially in recognition of Evacuation Day, the day the British evacuated Boston in 1776.

However, according to a 2010 story by Boston station WBUR, it’s long been suspected that there were ulterior St. Patrick’s Day motives behind the decision, which decreed that “state as well as municipal offices and schools in Boston, Chelsea, Revere, and Winthrop – the communities that compose Suffolk County – are all closed for the holiday. Private businesses remain open.”

The bill has received waves of criticism over the years, with the most recent governor of Massachusetts, Deval Patrick, at one point seeking to revoke March 17’s status as a public holiday.

But was Suffolk County on to something? St Patrick’s Day is special to so many not just in Massachusetts. It is an idea that should be thoroughly discussed.

What do you think? Should St. Patrick’s Day be a public holiday in the US? Do you currently miss work or keep your kids out of school for the day in order to celebrate? Share your thoughts in the comment section at the bottom of the page.