"The Protocol is seen by [Unionists] as part of the appeasement of Dublin and the rhetoric of grievance and rage has escalated in loyalist parts of the North." 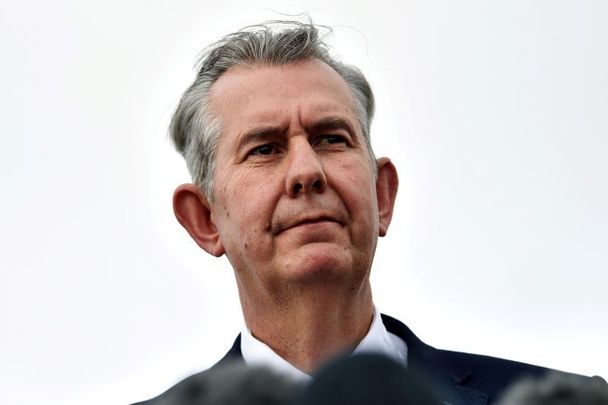 In a letter to the Irish Voice newspaper, sister publication to IrishCentral, Gerry O'Shea writes: "The IRA is long gone. Unionists and nationalists must now deal with the unpredictable forces of democracy."

One hundred years ago, the unionists in Northern Ireland saw themselves in a very hostile environment.  They felt hemmed in, surrounded by a clear majority of nationalists on the island, all of whom aspired to some kind of united country ruled from Dublin.

So, their top leader, Edward Carson, made no bones about the reasoning behind the sectarian partitioning of the country which involved lopping off six counties from the 32 in the whole island “in order to achieve a decisive Protestant majority in which unionist power would be guaranteed in perpetuity.”

They feared Catholic domination at a time when the Catholic-Protestant divide still impacted political divisions in Europe, hearkening back to the religious wars of previous centuries. The Roman church was in its pomp, passing a decree of infallibility in 1870 that claimed the pope could never be wrong in matters of faith and morals because he alone was unerringly guided by the Holy Spirit.

After the foundation of the new Irish state, Protestant fears were seen to be well-founded. The Catholic hierarchy reached far beyond the pulpit by insisting on giving its stamp of approval to all-important legislation being debated in the Dublin Parliament.

For example, the use of contraceptives was a major issue in Ireland in the 1970s. Catholic clergy viewed their availability as the sure road to community licentiousness and moral depravity.

Charles Haughey, the minister for health in the Dublin government at that time, devised a law that allowed the purchase of various pregnancy blockers, but only if prescribed by a doctor.  He characterized his parliamentary bill as “an Irish solution to an Irish problem.”

Since then, the influence of the Catholic Church has waned dramatically in Dublin. In fact, the Republic of Ireland was the first country in the world to allow gay marriage after a national referendum.

Abortion is now easily available in Irish clinics and hospitals, and a few weeks ago a bill providing free contraceptives for all citizens between the ages of 17 and 25 was passed in Parliament without even a speech opposing it.

However, in Belfast, some churches play pivotal roles in the legislative process. The Democratic Unionist Party (DUP), the leading Protestant party in the last Assembly elections, is greatly influenced by the Free Presbyterian Church, which is unashamedly part of the Christian fundamentalist tradition. Forty percent of the party’s councilors are active in that denomination which claims a membership of just over half of one percent in the wider population of the statelet.

In May this year, Arlene Foster was forced to resign from the leadership of the DUP because she abstained in a vote calling for a ban on gay conversion therapy.  It should be stressed that she didn’t vote against this absurd evangelical proposal; she just refused to take a position on the matter.

Her successor, Edwin Poots, proudly proclaims that the earth is just 4,000 years old in accordance with his reading of the Bible. He is also convinced that Catholics are six times more likely to be infected by Covid-19 than his Protestant constituents. Poots was also dumped from the leadership because he was deemed to have strayed from orthodoxy on the Irish language controversy.

In dealing with Brexit, the most important political issue in Great Britain for the last half-century, the DUP aligned itself vociferously with the hardline Tories who made dubious claims about how leaving the European Union (EU) would usher in a new era of national pride and economic progress.

Rational arguments were dispensed with as the Brexiteers successfully convinced the British people that they should walk away from a guaranteed market with over 400 million people to embrace possible new trading agreements with non-EU countries and to somehow re-invent an imaginary imperial past.

Britain did well economically in the EU since they joined in 1973, but they resented being just one voice among 27. They defeated Germany in two world wars only to end up playing second fiddle to them in the new European power center in Brussels.

The Brexit vote in Northern Ireland favored remaining in the EU by 56 percent to 44 percent, with four in 10 unionist voters on the side of the local majority.  However, the overall result in the United Kingdom favored leaving and set in motion a crisis in Northern Ireland.

The Protocol which was agreed as part of the Brexit negotiations between London and Brussels steered clear of a return to a hard border between the two jurisdictions in Ireland.  Instead, a customs arrangement in the Irish Sea was initiated which kept Northern Ireland with one foot in Europe.

All the unionist parties cried foul declaring that they are proud British citizens bowing only to the English monarch.  The Protocol is seen by them as part of the appeasement of Dublin and the rhetoric of grievance and rage has escalated in loyalist parts of the North.

The Johnson government, which signed off on the protocol after long discussions with Brussels, demanded that it be replaced by some other system acceptable to loyalists in the North. The Europeans made significant changes to avoid bureaucratic delays, but predictably the loyalists said they want more.

President Biden warned the prime minister that any return to a hard border on the island will doom upcoming talks of a trade deal with America.

Unionist pronouncements grow harsher against the “jackboot” of Europe. David Campbell, head of the paramilitary Loyalist Communities Council leaves no doubt about what may be ahead if the Protocol is not ditched: “If it comes to the bit where we have to maintain our freedoms within the U.K. by force, so be it.”

Ironically, the success of the Brexit referendum in 2016, so heartily celebrated by many unionists, has fundamentally changed attitudes to the constitutional arrangement that began with partition 100 years ago.  A recent poll revealed that 52 percent of the people there are happy with the Protocol.

In the last Assembly elections in 2017, the DUP got 29 percent of the vote; a recent poll suggests they have dropped to 13 percent.  Sinn Fein has shed a few points but comes through as the strongest party by far at 25 percent.

The other unionist parties and the nationalist SDLP as well as neutral Alliance cluster around 15 percent, strongly suggesting that Michelle O’Neill, the Sinn Fein leader, will be the next first minister.

Prior to the 2016 plebiscite, more than two-thirds of the people in Northern Ireland favored maintaining the governmental link with Westminster. Today, multiple polls show a very different electorate.

These gauges of public opinion show that while only 26 percent of people in the statelet in 2016 believed that Brexit would make a united Ireland more likely, that number has increased to well over 50 percent today.

It should be stressed that these figures describe the participants’ perception of the likelihood of imminent constitutional change but do not indicate approval for a united country.  With the exception of one poll, a majority of the people in Northern Ireland favor the status quo but now by a small majority.

The IRA is long gone. Unionists and nationalists must now deal with the unpredictable forces of democracy.

Young people from both communities are looking for new arrangements, new political structures that will move Northern Ireland away from old shibboleths and into serious discussions that beckon the country forward into a mature, functioning democracy where all the traditions on the island are respected.

The people involved in this serious process, politicians as well as religious and community leaders, are modern-day Irish patriots.

*This letter to the editor first appeared in the November 3 edition of the weekly Irish Voice newspaper, sister publication to IrishCentral.