Opinion: "It’s a flag-waving exercise but no one is really looking. The public demands solutions to problems rather than more analysis." 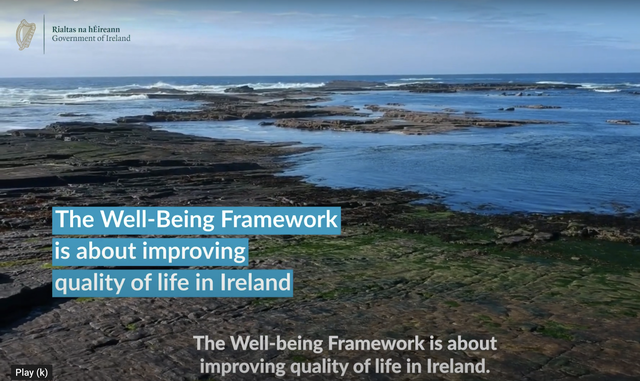 A scene from a video promoting the Well-being Framework. YouTube

The Irish government has officially launched a Well-being Framework for its citizens.  No, it’s not a joke, but it is a prime example of virtue signaling nonsense on a grand scale. Measuring well-being hardly seems the job of a government, but the Irish government is pressing ahead.

In launching the project, Taoiseach Micheal Martin said he was starting a “public conversation,” but to be honest the whole process feels very much like a stereotypical Green Party project, which indeed it is, a box-ticking exercise full of airy-fairy good intentions for their own membership.

What could be more virtuous, or indeed more misleading, than this framework, and what better way to put every sociologist and think tank in the country to work on a meaningless exercise.

The very premise that we chart progress by economic factors alone is not true. In Ireland, in areas such as housing and health, we have very objective measurements.

We call them waiting lists, and they tell their own tale. There are disastrous waiting lists in both housing and health right now.

But why believe your own lying eyes and deaf ears.  Our betters know better, driven by good intentions, with plenty of consultation, lots of appraisals involving tons of stakeholder feedback, academic, economic, and sociological reviews leading to draft, preliminary and final reports that can be parsed and analyzed.

What joy.  It’s a flag-waving exercise but no one is really looking. The public demands solutions to problems rather than more analysis, but the government prefers virtue signaling on a grand scale.

The initial Well-Being Framework report published by the government last week is also a crime against plain English and will be a godsend for aficionados of that innocent office game Buzzword Bingo.

For example, how about this for jargon: “The overarching framework sets out the concepts and parameters, and a dashboard of indicators is a supporting measurement.”

Or better still: “In defining the dimensions, a broad and holistic conception is best.”

In other words, the devil is in the details  but we’ll just skim the surface and don’t you dare take issue with us and say it is all useless blather designed to keep economists, professors, feel-goodies, feel-baddies and bureaucrats employed.

While it is still a work in progress, when completed the framework will have 11 different dimensions which can be categorized into three higher-level groupings representing person, place and society.  Well, we can hardly wait.

All this data will be distilled into a single dashboard that will indicate just how happy we all are with the quality of our lives.   Its stated objective is to provide a set of measures to indicate how society is faring, and to use this information to inform broader economic policy.

So where did this odd idea originate, what will it entail, and is it as crazy as it sounds?

To answer that last question first, in fact it has become fashionable for countries to look at ways to express economic and social progress other than through the conventional GDP measurements.

In Ireland’s case it turns out that the Well-being Framework was a commitment in the Green Party’s manifesto which turned into a promise made in the 2020 Programme for Government.

The coalition parties in that document claim that existing measures of economic performance only valued public expenditure on the basis of the inputs used, not the outcomes achieved -- are you with me?  It’s about what you put in and get out, or something like that.

Current indicators, it was felt, overlooked equality of opportunity, distribution of wealth and fairness.  However, listing the true trends of these lists -- that the income gap is widening for instance -- would make any government reek of incompetence.

But as any good statistician will tell you, how questions are asked determines the answers that you get. In other words, with skillful manipulation, you can make a silk purse from a sow’s ear.

A working group was set up to develop the framework, but in truth there was no need to reinvent the wheel as countries such as the U.K. have been collecting data like this for years – the U.K. has had its own Measuring National Well-being program since 2013.

The consultation documents acknowledge that many aspects of well-being are dependent on where people live.  Who would have thunk it, as they say in the Bronx.  It might stand to reason that living in an inner-city slum is worse than residing in a nice neighborhood, but this government seeks a way to avoid proving that.

It is true that differences can be based on whether an individual lives in an urban or rural location.  Environmental aspects – for example air and water quality – are also location dependent.

This would suggest that if a framework goes ahead it could conceivably have some value if it reflected variances across regions rather than as a single national report.  But that would require subjects and data sets on an immense scale.  Not going to happen.

Drilling down from the dimensions we have a series of questions. These will be asked by Central Statistics Office (CSO) enumerators as part of their regular sampling of households.

We will have individuals being asked if they feel safe walking home alone at night, or in relation to the environment if they have accessed the natural environment at least once a week over the past six months.

A key question then is will it go ahead and if so, how soon will it be a useable framework?  A first iteration will be released this autumn, but it already carries a major caveat as we are told it will not be able to fully measure all aspects of each dimension due to gaps in the data.

I have read a number of the reports that have been published, and having waded through them I would have to say that the chances of a functioning well-being dashboard being produced anytime soon are fairly minimal. Can Ireland survive?

While there is political support for the Well-being Framework, the reality is that despite promises and PR there is little appetite for this framework among the mandarins in the Civil Service, nor is there a willingness to engage. For instance, I asked the Department of the Taoiseach when the Irish version would be published and am still waiting for a reply.

Crucially the CSO, tasked with collecting the data, has stated that “such collection remains challenging given the growing demands from the EU and other national users across the broad range of statistical programs.”

The kicker comes in the very last paragraph of a 56-page report where it is stated that “fully developing a Well-being Framework and related data improvements, are considerable pieces of work and will require significant time and substantial resources.”

With such a lack of enthusiasm from a key stakeholder and a clear inference that resources are limited, I’m afraid the chances of a framework seeing the light of day anytime soon are slim to none.

The fact is that when Ireland’s Civil Service wants to kick a can down the road, it makes sure it stays kicked and that it travels a long, long way, perhaps over the side of a cliff even.

Now how do you feel -- your government wants to know.  Better to ask Siri.

Here's the video issued by the Irish government entitled "A Well-being Framework for Ireland - Join the Conversation":