Huma Abedin, longtime friend and confidante of Hillary Clinton, gets to tell her story in her new book "Both/And." 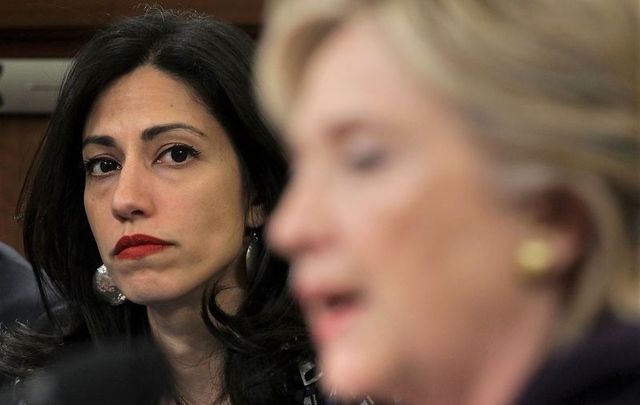 A very familiar figure in Irish America, Huma Abedin’s memoir on her time with Hillary Clinton is very informative and tells a remarkable story.

You could not but notice Huma Abedin when she entered a room. She had an extraordinary presence that drew every eye to her. Perhaps it was the exotic looks with roots in both Saudi Arabia where she grew up and India and Pakistan, and the fact that she wielded enormous power in terms of access to the Clintons, especially Hillary.

She has a memoir out called “Both/And” which is garnering huge attention with two New York Times stories and a special launch party by Anna Wintour at Vogue. It is as if the mystery woman has finally emerged from behind her veil.

Of course, the details in the book about her disastrous marriage to former Congressman Anthony Weiner, which may have cost Clinton the presidency, are being eaten up by readers but actually, she reveals little, in classic Huma style.

She was used to secrets. As Hillary Clinton’s most trusted aide since 1996, she was a constant buffer against all types of people seeking to meet the First Lady and later Secretary of State. At public functions when people swarmed around the first lady, Huma was the “body person” protecting her boss.

Stella O’Leary, of Irish American Democrats, had nothing but praise a few years back as to how Abedin handled the job.

Speaking to the Washington Post about Abedin’s work with Clinton, O’Leary described her as instrumental in navigating and balancing all of the demands on Clinton’s time and attention.

“There will be times when we’re all feuding among ourselves about who’s getting the most attention, and Huma works it out. She’s very diplomatic and calm,” O’Leary said. “She’s so sweet and nice and puts up with unbelievable nonsense.”

But she was never offensive or haughty, usually directing someone being very persistent to another Clinton staffer if they wanted a question dealt with.

Hillary badly needed that trusting soul, that person who could ward off the unwanted and form a protective shield around the First Lady who remained one of America’s most hated and loved women depending on your view of her.

I remember when Hillary was guest of honor at one of our events at Irish America Magazine and I was descending the elevator with her at the Hilton Theater in New York to escort her to her seat.

When the elevator door opened and she stepped out, pandemonium reigned, as due to an error in timing, the crowd, instead of being seated, were still on their way in. Everyone frankly lost their marbles and surrounded the poor woman on all sides, camera phones flashing, pushing, and shoving to get her attention. It became an enormous scrum of bodies.

It was one of the craziest scenes I had ever been involved with and one person was sent reeling, bloodied in the forehead after being hit by a TV camera. (He still insisted on taking a picture.) It was also a glimpse into being famous, really famous, I wouldn't want it for all the tea in China.

It got downright dangerous but it was Huma who took charge and moved the crowd back, gathered everyone, and the night resumed as if nothing had happened. 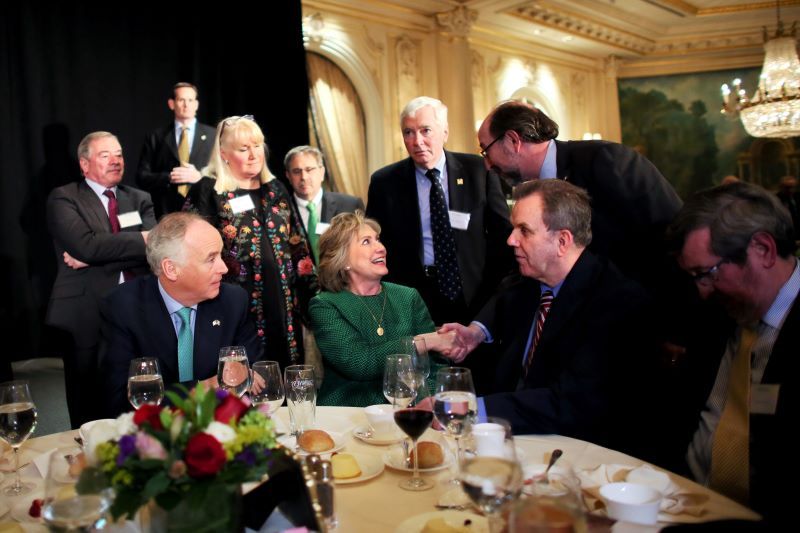 March 16, 2015: Hillary Clinton, with Niall O'Dowd to her left, during a ceremony to induct her into the Irish America Hall of Fame in New York City. (Getty Images)

Huma's air as a mystery woman came to an end when she married Congressman Anthony Weiner. He seemed a strange choice. In all my years as a journalist, he and Joe Kennedy Senior were the most arrogant politicians I met.

When Weiner was running for Mayor of New York City, his campaign asked for a briefing on Northern Ireland. After about five minutes, Weiner took over the briefing himself and explained the issue to everyone even though he knew next to nothing about it. Joe Kennedy had done pretty much the same years earlier.

That stayed on my mind when Weiner was later arrested for sending lewd pictures to a 15-year-old girl, the second time he had been caught doing it after he inadvertently sent a revealing picture to his Twitter followers. He threw away a highly promising political career in the process and went to jail.

He seemed so utterly the wrong guy with the nickname online of “Carlos Danger” telling you all you needed to know.

Of course, the FBI found some Clinton files on his laptop which led to an investigation just weeks before the election. Thanks to Carlos Danger, Hillary’s emails, harmless though they were, cost her the presidency.

As for Huma, she finally gets to tell her story, and an extraordinary one it is too, but she must reflect but for her husband, she would be writing in the White House.

She is still an enigmatic figure and this new book does not really change that. She was a player when the high stakes of the presidency were on the line, and she and Hillary lost out tragically because of Huma’s sex pest husband.