"Northern Ireland has become a symbol of democracy's power to transcend divisions and deliver peace. We need that beacon of hope now more than ever." 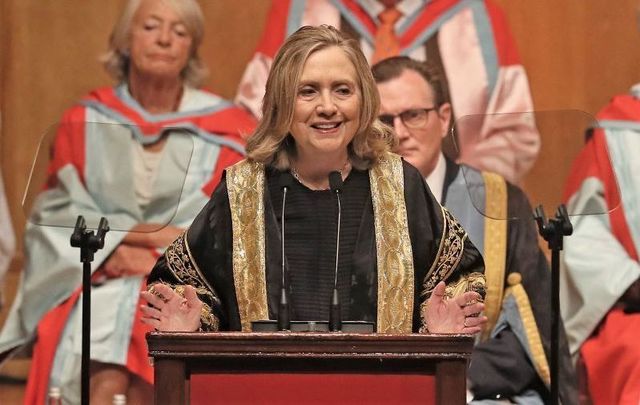 September 24, 2021: Hillary Clinton is installed as the chancellor of Queen's University during a ceremony at the Belfast academic institution in Belfast, Northern Ireland. Getty Images

Hillary Clinton was installed as the first female Chancellor in the history of Queen's University Belfast in a ceremony in Belfast on Friday morning.

Clinton, the former Secretary of State and US Democratic Presidential candidate, was initially appointed to the position in January 2020 but had been unable to attend an official inauguration ceremony due to the COVID-19 pandemic.

She became the 11th Chancellor of Queen's University in a ceremony at Whitla Hall on Friday at the end of the first week of the academic year.

Today we welcomed Secretary @HillaryClinton as the first ever female Chancellor of Queen's University Belfast.#LoveQUB pic.twitter.com/zszXPBfeI1

In an address at Whitla Hall, Clinton said that it was an "easy" decision to accept the role of Chancellor at the university.

"I've always enjoyed being on university campuses, talking with students and faculty, and learning about their experiences and perspectives, but Queen's is special," she said on Friday morning.

The former Secretary of State described Queen's as a "university with global reach and local impact" and added that it was a first-class research institution.

She said that she was excited to learn more about the university's history and hopes that she can help tell its "exciting story".

Clinton also pointed to the recent history of Northern Ireland as a reason for accepting the role.

"Northern Ireland has become a symbol of democracy's power to transcend divisions and deliver peace. We need that beacon of hope now more than ever.

"Institutions like Queen's help build a bellwork against authoritarianism, sectarianism, and divisiveness."

Appointed as Chancellor for a five-year term in January 2020, Clinton's duties will be largely ceremonial. The 2016 Democratic US Presidential nominee will preside over graduation ceremonies, serve as an ambassador for the university, and offer advice and counsel to senior management at the university as part of her duties as Chancellor.

Trying on my new chancellor's robes for size. They fit!

So honored to be officially installed today as the first female chancellor of @qubelfast—doubtless the first of many. #LoveQUB pic.twitter.com/7GhBzdSqE0

Professor Ian Greer, the President and Vice-Chancellor of Queen's University, said that the university was "delighted" to welcome Clinton as its new Chancellor.

"Secretary Clinton is an internationally recognized public servant who has demonstrated a longstanding commitment to Northern Ireland. She has an enormous amount to offer the University and will continue to work as a key advocate for Queen’s on the international stage," Greer said in a state before Friday's ceremony.

A total of 14 Queen's honorary degrees were awarded during Clinton's inauguration ceremony, with "Derry Girls" creator Lisa McGee receiving a Doctor of Literature for Distinction in the Arts and former PSNI Chief Constable Sir George Hamilton a Doctor of the University award for Distinction in Public Service.

You can watch Hillary Clinton's address from her installation as Chancellor of Queen's University Belfast here: