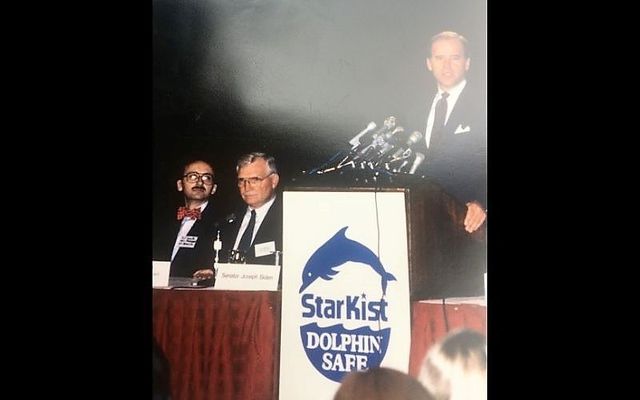 Joe Biden’s decency and love for ordinary people extends to combatting climate change and protecting the environment and animals.

*Editor's Note: This article was submitted to IrishCentral by Ted Smyth, President of the Advisory Board of Glucksman Ireland House NYU and Chair of the Clinton Institute for American Studies in University College Dublin. He is a former Irish diplomat.

For example, the Humane Society has endorsed Biden for his legislative record protecting wildlife and the environment, including laws that ban the use of dolphin-deadly nets when fishing for tuna.

I have personal knowledge of Biden’s sincere commitment to this issue from my time as Senior Vice President for Government Affairs at the Heinz Company. In the late 1980s, one of our affiliates, StarKist Tuna, was being pressed by environmental groups like Earth Island Institute to ban fishing for tuna by tracking dolphins under which tuna congregated in the Eastern Tropical Ocean.

It turned out that the purse seine nets would surround the tuna and the dolphins, resulting in the death of thousands of dolphins as by-catch. Earth Island Institute biologist Sam Labudde’s secret video of dolphins dying in tuna nets became viral on national television and school children especially were outraged, writing thousands of protest letters to the tuna companies.

In response to this consumer action, Heinz in 1990 became the first company to stop buying tuna from boats that maimed dolphins, with Chicken of the Sea and Bumble Bee quickly following our lead. But we needed legislation to enforce the initiative, and I approached Senator Biden, then Chair of the Senate Judiciary Committee.

Senator Biden was immediately responsive, telling me that his nine-year-old daughter Ashley was part of the letter-writing campaign from grade schools to protect the dolphins.

In a recent interview with Marie Claire, Ashley, who is now a social worker, confirmed this: “I became obsessed with the plight of dolphins getting stuck in tuna nets.

"My dad connected me with Congressman Barbara Boxer, who I nicknamed the ‘dolphin lady,’ and she got me onto the floor to help lobby Republican members of Congress for a law to protect dolphins.”

Working closely with Senator Boxer, Biden persuaded Congress to pass the Dolphin Protection Consumer Information Act of 1990, formalizing “Dolphin Safe” labeling for tuna not caught with purse seine fishing methods. This act created a standard for tuna imported or exported in the United States. American consumers responded to the new labeling, and sales soared for tuna products labeled with the "Dolphin Safe" label.

While that successful legislation is a very small part of what Joe Biden has accomplished in a long public service career, to me it is just typical of the Vice President, responding positively to a problem, and coming up with a creative solution that could be supported by Republicans and Democrats, and cheered on by lovers of animals everywhere.