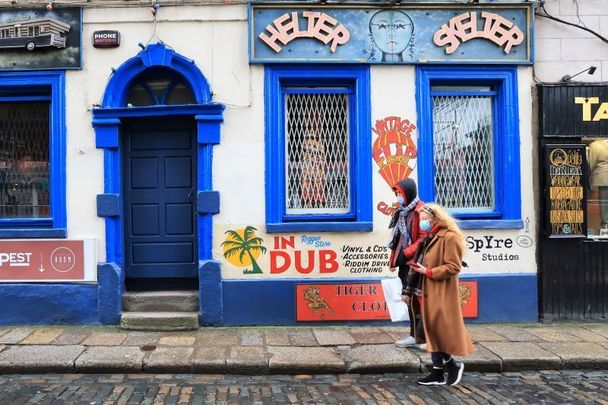 Ireland's post-Christmas lockdown is seeing numbers of infection reduce but a look at its vaccine rollout, when compared to the United Kingdom, makes for a grim forecast.

By last Sunday the positive effect of the current lockdown in Ireland was apparent.  The number of new cases that day was 1,024, down from almost 4,000 a day three weeks ago.

The number of COVID patients in hospital that day went up by just 35.   The number in ICUs was down to 178, well within the capacity of the system to cope.

This improvement has continued since the weekend and the trend is now well established.  After several weeks of lockdown, we are heading in the right direction.   And with the vaccine rollout now underway here, even if it is very slow, there is growing optimism that the distant end of this nightmare is in sight.

That has led to growing pressure for an end to the current lockdown, the third we have endured since the pandemic began. This one began at the end of December and was supposed to run for six weeks but was then extended to March 5.   And the government has already made it clear that it may be extended even further unless the figures improve even more.

That has not stopped the calls for a more speedy easing of restrictions from some influential voices, like that of Ryanair boss Michael O'Leary.  Less restrictions and more vaccinations is what he wants, and there are other business leaders particularly in the hospitality sector as well as many ordinary people who agree with him.

The problem is we have been down this road before.   At one point early last summer we had the new case numbers down to 20 or 30 a day and we opened up again, travel into the country quickly increased and everyone relaxed a bit. That led to a surge with frightening speed and before we knew it we were back in lockdown again.

So did we learn the lesson?  Not at all.

We did it again, ending the second lockdown before Christmas against the advice of the experts so that people could have a break, do their gift buying, travel around the country and see family over the holiday.   That caused another alarming surge in January and the result is the current extended lockdown.

So you would hope that this time we know better.  Yes, the figures are below crisis level and steadily heading downwards.  But we are still a long way off the target of 50 new cases a day, or less, which is the level the experts say we need to reach before we can open up again to some degree.

And even at that level it would require intensive track and trace followed by fast intervention when local outbreaks occur. It would be a move from full lockdown to a lower level of restrictions, not a return to normal.

Despite the glimmers of hope, there is continuing doubt about the government's ability to get this right.  They have been slow and less than convincing in their handling of the crisis, not helped by the mess the EU has made of vaccine supply in Europe.  A couple of recent examples of this have undermined confidence.

First is the mix up over the AstraZeneca (AZ) vaccine, the one that is cheap and can be stored in an ordinary fridge and was seen as the key to a fast rollout here by local doctors and pharmacies.  It was supposed to enable us to get all our over-70s vaccinated in the next few weeks.

Although some questions had been raised in Europe about inadequate data to prove it was effective for older people, the EU's European Medical Agency (EMA) eventually approved its use for all age groups.

By then, as you probably know, the AZ vaccine had become embroiled in a major row with the EU Commission about supply in Europe and accusations that the U.K. was being favored.   It all became political, despite the real reason for the mess being the incompetence of the EU Commission in placing orders in time.

France and Germany announced they would not give the AZ vaccine to their old folk, even though the EU's vaccine authority, the EMA, had approved it!
Since then AstraZeneca has produced more data on older age groups and the UK scientists have again said it is effective.

By last Sunday night, over 12 million people had been vaccinated in the U.K., including almost all their old folk.  They are now doing half a million jabs a day, which is five times the rate in Europe.

The Irish government, however, has decided to follow France and Germany, and will not now give the AZ vaccine to the over-70s, instead using the Pfizer and Moderna vaccines.  This decision has thrown our plans into chaos since supplies of both are limited and both require very low-temperature storage.

The result is that old folk here will be waiting longer for their jabs.  No clear explanation has been given for why this decision has been taken.  Inadequate data has been mentioned.  But it looks very much like we are simply copying what France and Germany have done.

Research published in the U.K. this week suggests that the AZ vaccine is less effective against the South African variant of Covid, giving little protection against mild to moderate infection.  But it is still effective in reducing the impact of severe infection and preventing life-threatening disease levels, which is critical for old folk.

AstraZeneca are saying that a booster shot will deal with this.  And since this came after the Irish decided not to use the AZ vaccine for old folk, it does not explain that decision.

Another example of the confusion here relates to travel.  It is now a couple of weeks since the government announced that incoming travelers without proof of a negative Covid test -- and particularly anyone from Brazil or South Africa -- would be required to quarantine for 14 days in approved hotels.  We were way behind a lot of other countries in doing this -- initially we were told it was impractical or even impossible here -- but the belated decision was welcome.  One reason is that we know that foreign travel played a significant part in the earlier waves of the virus here.

Now it has emerged that it will take weeks to implement this because the government believes new legislation is required to enable enforcement.  There are issues to do with personal rights that may be unconstitutional, we are told.  It is unbelievable that this is happening in a deadly pandemic, but then our lawyers have always loved a lucrative argument.

And while this is going on there is new evidence that some international travelers are using Ireland as a back door into Britain where banning flights and enforcement do not appear to be a problem.

Also on the travel front, it emerged last week that while the garda have the power under new law to fine people breaking the five-kilometer travel limit for non-essential reasons, they cannot stop people from completing their journey.  So even though people are being stopped at garda checkpoints near Dublin Airport and issued with €500 fines, the garda cannot stop them going on holiday.   It seems those who can afford it are simply adding in the €500 fine as part of the cost of a sunshine break.

There are also concerning anomalies in our vaccine program, such as it is.  We know that a number of administrative staff in hospitals have been vaccinated while some front line nurses are still waiting for their jabs.

One nurse I know in a care home in Kildare is one.  The staff in her facility is being tested weekly but they are still waiting to be vaccinated.

None of this would fill you with confidence.   We seem to be bound up in red tape and unwilling to question the EU.

When a U.K. minister last week mentioned the possibility of sending surplus vaccines to Ireland the reaction here was to wonder whether this would be legally possible.   It's enough to make you weep.

The pathetic pace of vaccination here so far, especially in comparison with our nearest neighbor, is the cause of growing dissatisfaction with the government and the health authorities.  They keep announcing what they are going to do (last weekend it was a promise of 40 large vaccination centers across the country).

But getting things done is a different matter, like controlling who gets into the country and enforcing quarantine.

Each evening we are given the Covid figures for the day, the number of new cases, the number in hospitals and in ICUs, and the number of deaths.  What we are not given, however, is how many people were vaccinated here in the previous 24 hours.

The figure for the U.K. is published every day, but not here.  One wonders why. Perhaps it's too embarrassing.

By last Thursday a total of 219,000 jabs had been given in Ireland, a long way off the 11 million jabs that had been done in the U.K. by the same day.  Maybe that's the reason.