Public health officials in Ireland, who a predicting a surge related to the Delta variant, are urging caution. 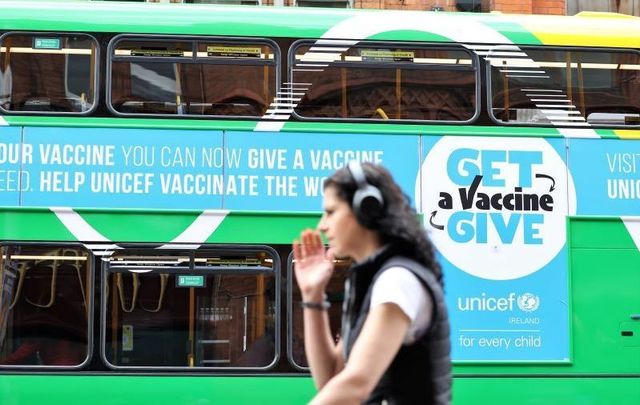 July 2, 2021: A person passing by a Dublin Bus which bears an advertisement for vaccines. RollingNews.ie

Ireland is stepping up its Covid vaccination program as concern spreads in health and government circles as England prepares to remove most of its remaining restrictions, including wearing of masks, by July 19.

Although Northern Ireland has not yet followed U.K. Prime Minister Boris Johnson’s message to scrap face mask and social distancing laws, there is anxiety in border areas in the Republic.

The Buncrana area in Inishowen, just a 20-minute drive from Derry, has an infection rate of 608 per 100,000, the highest in Ireland. It is six times the national rate and is partly believed to be caused by people traveling across the border where there has been indoor dining and drinking since May 24.

Pubs and restaurants have still not been opened for indoor hospitality in the Republic. It was due to start on July 5 but was deferred, and hospitality chiefs are pressing to have it resumed by July 19 when trans-EU digital travel certificates are to start.

Taoiseach Micheál Martin said on Tuesday that the Delta variant of Covid is beginning to have an impact in Ireland and that the government was very worried as numbers were increasing.

He said what was happening in the U.K. was being monitored, especially the relationship between the number of Delta cases and the level of hospitalizations.

The National Public Health Emergency Team (NPHET) has suggested a surge of Delta variant infections is likely to be underway within 10 days to two weeks and the figure could reach 1,000 a day – compared with an average of 500 in recent days – by July 19.

In a Q and A on Facebook following U.K. Prime Minister Boris Johnson’s announcement, Dr. Ryan said not enough people have been vaccinated for any country to lift restrictions too early.

He added, “I think we are going to pay a price for that because we are not there at vaccination; the variants are really there and we have not protected enough people.”

"While this variant continues to present a threat, those of us who are fully vaccinated can have confidence in their vaccine and should feel comfortable meeting with other fully vaccinated people in all settings," said Holohan.

"Unfortunately, the Delta variant continues to present a risk to those of us who are unvaccinated or waiting for a second dose of vaccine -- we need to continue to follow the public health advice, manager your contacts, avoid crowds, wear a mask, wash your hands and most importantly get your Covid-19 vaccine when it is offered to you."

The Irish Times bitterly attacked Johnson’s decision. An editorial on Tuesday said that throughout the Covid-19 pandemic, the U.K. has been too slow to introduce public health restrictions and too quick to lift them.

“Those errors have cost lives. At nearly every turn, Prime Minister Boris Johnson has shown a resolute inability to learn from previous mistakes, his instinctive reluctance to impose controls on social and economic life apparently blinding him to the force of scientific evidence.”

The editorial noted that most restrictions in England would be lifted on July 19, including ending of school bubbles, reopening of nightclubs, and, most irresponsible of all, making face masks optional everywhere except in hospitals.

The Times added, “In effect, it is now British government policy to let Covid-19 rip through the population. It is a morally indefensible position that will cost Britain – and its neighbors – dearly.”

In Ireland, vaccine registration for 30- to 34-year-olds was brought forward two days, to Wednesday of this week, and the first vaccinations for this group will take place next week.

Those aged between 18 and 34 can currently receive the one-shot Janssen/Johnson & Johnson jab from around 800 participating pharmacies around the country.

Health Service Executive boss Paul Reid said a total of 4.42 million vaccines have been administered to date in the Republic, with 345,000 given in the past week.

He said on Twitter on Tuesday morning, “We’re working hard to protect as many people as quickly as possible.”

He said all eligible adults could be fully vaccinated by the end of August or early September if the new arrangements being put in place work out as planned.

Tanaiste Leo Varadkar said this week that there is “no reason to believe” Ireland will be forced to go back into lockdown for a fourth time due to the Delta variant.

Despite cases continuing to rise across Ireland, the Tanaiste remains confident the country can look forward to an outdoor summer.

“There is no reason to believe that we will be forced to go into a fourth lockdown because of the variant,” he told the Irish Independent.

“We can still have an outdoor summer holiday and look forward to schools and colleges going back safely in September when all adults are vaccinated.

“And we may be vaccinating teenagers at that point too.”