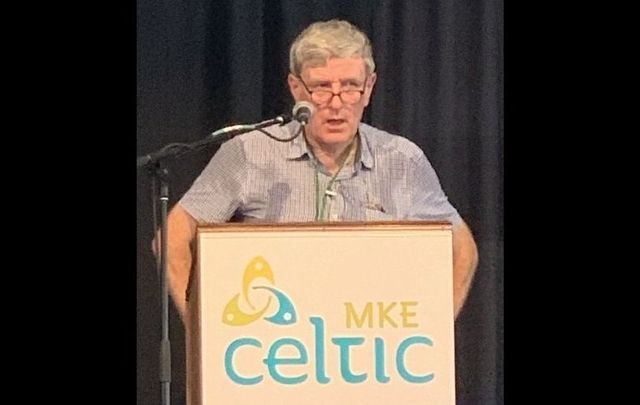 Under a big white tent on a hot August afternoon in Milwaukee, the Ambassador of Ireland to the United States, Daniel Mulhall, walked across the stage to the podium with bright energy and a ready-to-please smile.

He had reason to be joyful. This was the first Milwaukee Irish Fest since 2019 and the 40th since the inaugural event in 1981. Reflecting the complexities of special event planning in the Covid-19 era, many other ethnic festivals on these same grounds along Lake Michigan canceled their events for 2020 and 2021.

Organizers of the Milwaukee Irish Fest had carefully crafted an outdoor gathering that brought together the music and traditions of Ireland and other Celtic nations in a safe, pandemic-aware environment. Over 130,00 people typically attend the Fest to celebrate Irish culture.

According to his welcoming message on the Irish Embassy website, Mulhall’s stated mission is to strengthen the bonds between Ireland and the United States. The Ambassador seeks to engage with people about today’s Ireland and its links with the U.S., as well as about Ireland’s culture, literature, and history. Milwaukee’s Irish Fest represents a great opportunity to advance Mulhall’s mission.

On this afternoon, Mulhall spoke on ‘100 Years of Irish Independence,’ in keeping with the subject of his ongoing series ‘A Farther Shore’. The Ambassador’s blog describes the series as panel discussions to mark the centenary of the advent of Irish independence in 1921-22.

Educated in modern Irish history at University College Cork, one theme Mulhall repeated throughout his speech was how circumstances that are unexpected and unusual can impact events and history.

Mulhall feels the period between 1916 and 1922 transformed Irish political life. “The independence of Ireland and the partition of the north were inconceivable just a decade before. But there was a great deal of international upheaval at the end of World War I when Germany surrendered in November of 1918,” Mulhall said.

Ireland’s War of Independence began in January of 1919 and continued for two-and-a-half years until a ceasefire was declared in July of 1921.

“There is a significant difference between Ireland’s experience and those of other countries that became independent in the aftermath of World War I. Ireland secured its freedom from one of the victorious World War I powers, the United Kingdom,” Mulhall said.

Though the British government had overwhelming might on its side, they were unwilling to deploy it fully. Mulhall feels that in particular the British worried about the influence of Irish America and the risk of alienating American opinion. 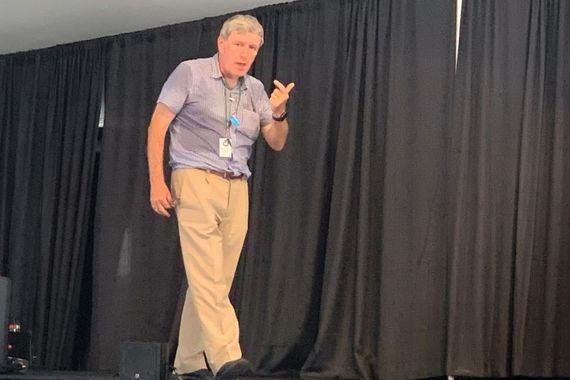 Ireland's Ambassador to the US Daniel Mulhall speaking at the 2021 Milwaukee Irish Fest. (Courtesy Tom Purdy)

Freed of his scripted presentation Mulhall took questions from the audience. The first question posed by an audience member was, “Will there ever be a united Ireland?”

The Ambassador moved from behind the podium and began to walk across the summer stage. Mulhall was now doubly warmed to the task of engaging with his audience, as evidenced by the sweat soaking through his short sleeve dress shirt. Mulhall began his answer with a nuanced historical perspective.

“Extraordinary things happened in say the last 10 years. Even Brexit. Who imagined that the British public would vote to leave the European Union? Other results, closer to home here were unusual too, right? Think about it.

“That’s why I don’t rule out a united Ireland in my lifetime. I’m not saying it’s likely, I’m not predicting it, but I’m saying I don’t rule it out because of the way in which things have developed in recent years and can develop in the future.”

The Ambassador ended his answer by saying there is nevertheless work being done.

“We now have a Shared Island unit in the Department of the Taoiseach which is working on building up links between North and South that maybe could make some form of unity more palatable in the future,” Mulhall said.

A second questioner asked whether Brexit would help lead to a united Ireland.

“First of all, we don’t know how Brexit is going to turn out. It’s only been eight months now so it’s still very early days. And I would say the omens are not good for Brexit. I don’t’ think it’s proved to be much of a success at all and I think people even in Britain may start to realize that.

“Now how that will affect opinion in Northern Ireland is very difficult to work out. But certainly, I think it was an own goal on the part of Ulster unionists to support Brexit because whatever it’s done, Brexit has brought the issue of the border in Ireland and therefore Irish unity back into the limelight where it really wasn’t for the 10 years before the Brexit referendum. So Brexit may have all kinds of unexpected consequences.

“But for me at least, the key at the moment is preserving peace and reconciliation in Northern Ireland. And the future will determine how the island of Ireland evolves in the period of 10, 20, 25 years. But at the moment we have to deal with the next couple of years and get through this potentially very difficult situation,” Mulhall said.

The next questioner asked the Ambassador for his opinion on the role of the Catholic Church in Ireland.

“I’m a representative of the Irish state. I’m not one of these people that has a negative perspective on the Irish Catholic Church, because I owe my present position to the fact I was educated very well by Christian brothers in Waterford back in the 1950s and sixties,” Mulhall said.

“Of course it’s also true that some of the great men that taught me were let down by other members of their order because there were obviously some pretty bad pennies who did some terrible things and really brought the order into disrepute.

“The succession of scandals has definitely undermined the standing of the Church in the public square. Most Irish people are still probably religious but the sort of devotion that my parents had, my parents' generation had, doesn’t seem to really be apparent in today’s Ireland.

“But I don’t see Ireland as a completely irreligious country. But I do see it as a country where the church is suffering from a serious backlash and they have a real challenge trying to win back the confidence of the people.”

The last questioner, this writer/Irish Fest goer, asked in economic terms what areas Ireland had a comparative advantage in relative to other European states and the rest of the world. Mulhall said those areas were food technologies, medical technologies, financial services, and educational software. 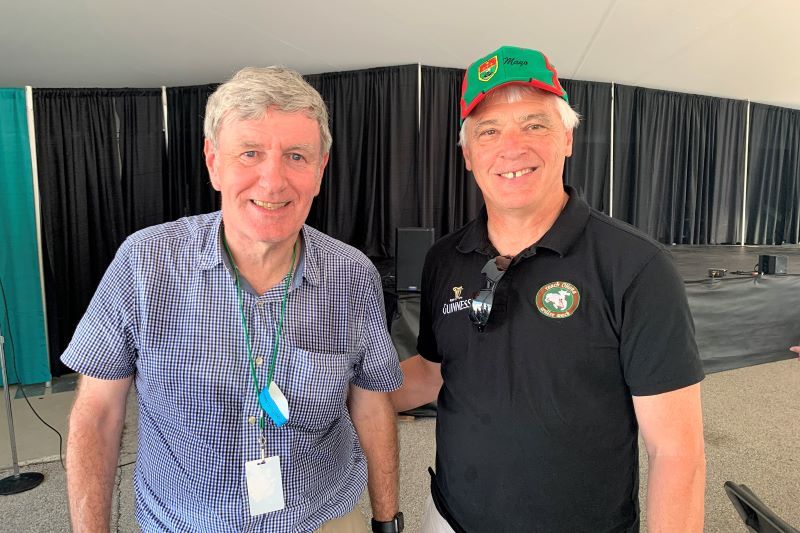 With the speech and its question and answer period concluded to enthusiastic applause, the Ambassador gathered offstage alongside staff from the Irish Consulate in Chicago. He greeted attendees who came up cheerfully.

Mulhall even good-naturedly told an Irish-American with family roots in County Mayo that although it was not his county's Gaelic Athletic Association team, it would be great if the Mayo GAA football team won the All Ireland Football final on September 11th. The Ambassador said he thought it was wonderful when teams that hadn’t won a championship in more than 50 years did so.

IrishCentral visitors can stay informed about Ambassador Mulhall’s views on Irish current events, history, and literature by following his blog on the Irish Embassy website. You can also follow the Ambassador on Twitter @DanMullhall.