Vote looks like a two to one victory for same-sex marriage. 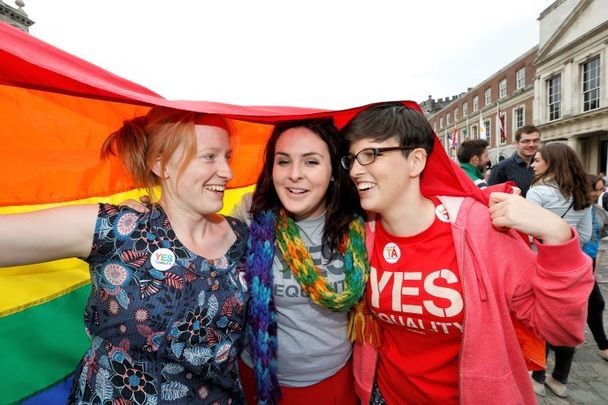 People celebrate the Yes Result in the Marriage Equality Referendum in Dublin Castle Courtyard on May 23, 2015. RollingNews.ie

Dublin: Something seismic has just happened in Ireland.

Welcome to the Rainbow Republic.

The experts are saying it is a huge majority victory for the Yes side. It looks like 2-1 in favor.

The No side has conceded. Only one constituency in all of Ireland, Roscommon-South Leitrim, appears to have voted against.

Same-sex marriage is now legal in Ireland, until recently the most conservative Catholic country in the world or at least close to it.

The world media is here to record a historic moment. For some of us it feels like what the victory of Barack Obama must have felt for the Unites States, an incredible moment of happiness.

We are surprised by joy.

Turnout for Ireland’s marriage referendum has been historic. The largest numbers since the Constitution of Ireland came into effect in 1937 have come out to vote in a referendum.

We feared it might be a no to same-sex marriage. We were wrong.

The growing sense that the vote is bigger than the marriage equality question itself, that in a way it's a massive cultural course correction, is inescapable when talking to Dubliners who give multiple reasons for voting for change.

It may be that is being seen as an important symbolic milestone on a journey to a more secular democracy, which would explain how it has so galvanized Ireland's youth in particular.

Young people and old people voted in record numbers and despite the protracted talk of an urban and rural divide - and a divide between the young and old - it’s already clear that the old political calculus of Civil War Ireland no longer works.

Even in County Donegal, a conservative bastion far away from the glittering capital, both constituencies, it is now confirmed, have voted yes.

All week long social media in Ireland's most northerly county was ablaze with passionate appeals by the county Yes Campaign to get out and vote, with a majority of them clearly tilted toward Yes.

“We're not complacent but I think the Yes campaign has been a phenomenal event for Ireland,” Brady told IrishCentral.

“We've shone a light on people who were invisible for far too long and that's going to have an impact for years to come in Ireland,” Brady said.

Yes Equality's strategy from the beginning was to remind voters that the referendum was about people, family members, friends, or neighbors. To do this they worked to create an atmosphere without judgment or fear.

“That positive focus has driven that campaign.”

Brady hails from Donegal, where a dependably conservative voting pattern has always been a factor since the foundation of the state, but the marriage referendum seems to have finally disrupted traditional voting patterns.

“I think Donegal is a terrific example of what happened today. It's no longer a stereotype of metropolitan Dublin versus the rest of Ireland. Donegal has a phenomenal local organization on the ground that has led from the front, making sure the people could see that this was really about their own. They ran events, they created visibility, engaging people, and knocking on doors and explaining why it matters.”

Eamon McGee, the Gaelic footballer from Gweedore, was an early public supporter of the Yes Equality campaign, and also a celebrated local man who held sway with his own county. Remarkably the Yes campaign also received an endorsement from Daniel O'Donnell, the so-called housewives favorite Country and Western crooner. Both said that equality helped protect families, not undermine them.

“When you have them coming out and saying of course I'm for treating people equally, nobody is hurt by a Yes vote, well then people listen to their peers.”

Fine Gael Minister for Health Leo Varadkar, who is openly gay, tweeted on Friday night that the turnout in Dublin West was good. “Newly registered (supplementary register) turnout ranged from 87-98 percent. The young have voted in massive numbers.”

Aodhan O'Riordain, Labour Party minister of State at the Department of Justice and Equality, was less guarded in the prediction of a victory for the Yes side tweeting: “We've done it. Welcome to the #RainbowRepublic. So proud to be Irish today!”

The historic size of the vote augurs well for the Yes side since the numbers of young people voting are overwhelmingly in favor of the amendment, observers say.

And with these positive reports coming in tonight thousands of Irish LGBT citizens are daring to imagine, most for the first time in their lives, what it might feel like to be full citizens of their own Republic.

“I have this surreal and beautiful feeling that tomorrow I could wake up for the first time ever and consciously consider that I could get married,” Brady says.

“After a lifetime of that never being conceivable. I know that's very hard for people who already have the right to understand the joy of that, but the joy will be a revelation if we win. And I hope people who have always had this right get to share in the joy that we feel. I hope they sense how wonderful the thing they've been a part of has been.”