"The mayor-elect will have his hands full from day one, but Adams, a former captain in the NYPD, presented himself as a smart and capable candidate." 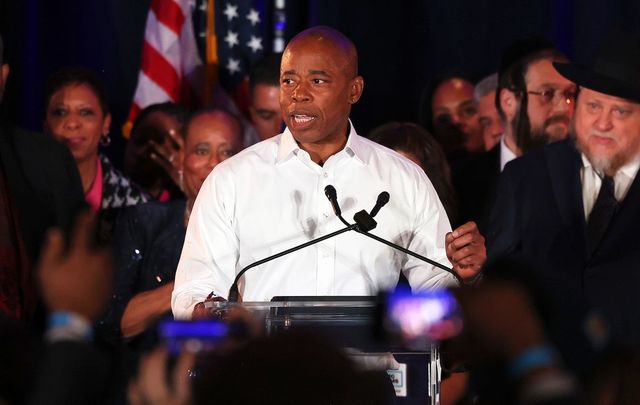 The following is the editorial from the New York-based Irish Voice newspaper, sister publication to IrishCentral, which went to print as votes were being counted in NYC's 2021 mayoral eleciton.

Editor's Note: Eric Adams, a former police officer, will become New York City’s 110th mayor. He will take over in the role in January 2022. The 61-year-old Democrat will now become only the second Black mayor in the city’s history following the late David Dinkins.

Though the Irish Voice went to press on Tuesday (Nov 2) hours before the polls closed, it would be a political shock unlike no other if Eric Adams isn’t the new mayor of New York City as you read this.

Once Adams got through the Democratic primary by the skin of his teeth he ran a great campaign in that we hardly saw him for many weeks. He stayed under the radar for much of the summer, and who could blame him?

Winning the primary in July was akin to winning the election proper given that Democratic voters outnumber Republicans in the city’s five boroughs by a margin of seven to one. His GOP opponent Curtis Sliwa didn’t have bags of cash to spend like the last Republican mayor, Michael Bloomberg, so Adams was a shoo-in.

No doubt Adams used the time away from the campaign trail to prepare himself to govern the greatest city in the world which badly needs a helping hand.

He has stressed the number one need to fight crime and make the streets safer.  It’s not uncommon to see loitering and open drug use in several areas of the city these days. The vicinity of Penn Station in Midtown Manhattan is particularly foreboding, not a good thing when the city is still trying to lure workers back to their offices post-pandemic.

That will continue to be a struggle if suburban commuters feel safer working from their homes than walking to an office building. The knock-on effects of empty offices are there for all to see and include shuttered small businesses that depend on foot traffic to survive.

The mayor-elect will have his hands full from day one, but Adams, a former captain in the NYPD, presented himself as a smart and capable candidate who knows the city inside out and is ready to lead. We wish him the best of luck.