A look at Éamon de Valera’s birth and the controversy surrounding his birth certificate. 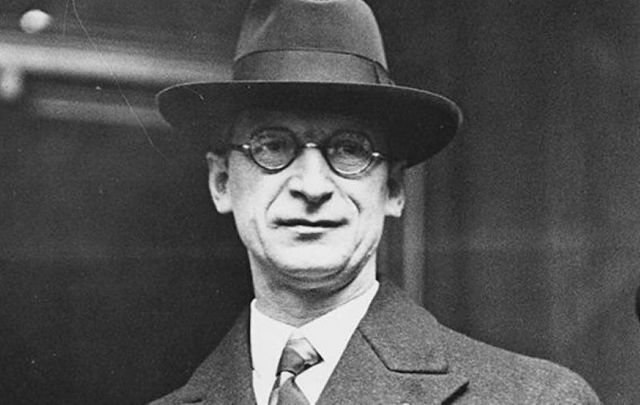 One of the most prominent Irish leaders of the 20th century, Éamon de Valera was born in New York City on October 14, 1882. We look at his birth and the controversy surrounding his birth certificate.

At the southeast corner of Lexington Avenue and 51st Street sits   the DoubleTree by Hilton Hotel Metropolitan. Inside the front door, immediately to the right, there is a plaque commemorating the birth of the man who did the most to shape Ireland in the 20th century:

On October 14, 1882, Éamon de Valera, the Great Irish Statesman, Was Born in the Nursery and Child’s Hospital Which Stood on this Site.

Erected By The Government of Ireland, The Native New Yorkers’ Historical Association, The Ancient Order of Hibernians in America, And Other Irish-American Organizations and Individuals

De Valera’s American birth on October 14, 1882, is an important historical occasion for many reasons. Primarily because, as many believe, it was his natural-born American birth – he was an Irish “anchor baby” in his day – that might have saved his life in 1916 after he was sentenced to death by the British for his participation in the Easter Rising. [By the way, Thomas Clarke, the architect of the Rising who was executed, was a naturalized American citizen, but he kept this a secret from the British.]

There are dueling biographies concerning the events of de Valera’s conception and birth. Although de Valera never wrote his own autobiography, "Éamon De Valera: A Biography" by the Earl of Longford and Thomas P. O’Neill is generally considered his “official” biography. In fact, in their acknowledgments, the authors state: “This book could not have been written without the co-operation of President de Valera himself. He has always steadfastly refused to write an autobiography, but once he had agreed to the suggestion that an authoritative biography be written he could not have been more helpful.” 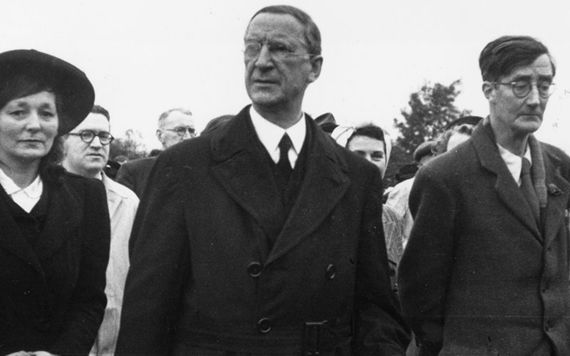 In fact, at times Longford and O’Neill seem to serve not as biographers, but as mere amanuenses to Dev’s official version of his life. They dutifully record the events of his mother’s early life and her immigration to New York in 1879.  It was there, they maintain, that the mother, Catherine (Kate) Coll, met and married the Spaniard immigrant Vivion Juan de Valera, who they describe as “a delicate young man,” on September 19, 1881, at St. Patrick RC Church in Greenville, NJ. The couple returned to New York City and took up residence at 61 East 41st Street and thirteen months later Kate gave birth to a baby boy at the Nursery and Child’s Hospital at the present location of the Doubletree Hotel.

Tim Pat Coogan in his own de Valera bio, "De Valera: Long Fellow, Long Shadow," describes the Nursery and Child’s Hospital: “It was destitute, abandoned children, children whose parents were away, and orphans: hardly the sort of place in which a mother would have wished to leave a child if she had a home, even that of a relative in another country, in which to place it.”

The de Valera baby was registered as “George” with the City of New York. Young de Valera was baptized at St. Agnes’s Church on East 43rd Street, just off Lexington Avenue and sitting opposite the Chrysler Building. The boy, however, was christened “Edward,” not “George,” it is said by Longford and O’Neill, because October 16 was the feast day of St. Edward the Confessor.

It is here that the biographers separate in opinion – dramatically. “I have to say that my researches, conducted at a stage when the bulk of this book was already written,” wrote Coogan in his Dev biography, “indicate that the story about Kate Coll’s getting married in Greenville does not stand up.” Coogan also searched other Catholic churches in the area without success. He also found no civil record in either New Jersey or New York.

Although he doesn’t say outright that de Valera was illegitimate, he is dubious about the circumstances of Dev’s birth and the mystery surrounding the lack of a marriage certificate and the contradictions in the baby’s name on birth certificates. “In de Valera’s childhood, and afterward,” Coogan wrote, “illegitimacy carried a stigma in Roman Catholic Ireland. If he knew or suspected that there was a doubt about his parents’ marriage, the knowledge must have been a burden to him.”

The question of legitimacy is given life in this story because the mysterious Vivion de Valera, still a young man, died in Denver in either 1884 or 1885, while his wife and child remained in New York. So it appears the foundation for this immigrant family was perilous in every way.

At the age of three, young Edward was sent back to Ireland to live with his maternal grandmother and uncles. Kate Coll eventually married Charles Wheelright, a Protestant, and settled in upstate New York, giving birth to two more children, a girl who died as a child and a boy who went on to become a priest. It is at this time, Coogan wonders, why Kate did not try to repatriate young Edward back to the U.S.A. “But no call came to Bruree [where young Edward was living with his family in County Clare] to bring the two half-brothers under the one roof,” he wrote. “As to why this should have been we can only speculate…Yet a typically Irish mother would have gone through fire and water to have her son with her. It is possible that her husband did not want someone else’s child.”

The contradictions revolving around Dev’s birth and certification – both civil and baptismal – once again come into focus at the Easter Rising in 1916. Of all the leading commandants in the Easter Rising, only two survived the firing squad – Thomas Ashe and Éamon de Valera. It has been stated for years that de Valera survived because he was an American citizen.

Why was de Valera’s American citizenship so important? Well, Britain at the time was involved in the Great War and was hoping to seduce the United States into the war on her side. One of the biggest voting blocks in America was Irish-Catholics, many of whom supported Ireland’s battle against the British occupiers. It would not be good policy in the eyes of Irish-Americans – many of whom were immigrants themselves or first-generation immigrants – to shoot one of the commandants who they not only saw as an Irish patriot but also as an Irish-American patriot.

It is at this time that Dev’s wife and mother went into action on different sides of the Atlantic. According to Coogan, Sinéad de Valera contacted “…the American consul in Dublin with a copy of de Valera’s birth certificate as proof that he could claim the protection of American citizenship. In New York, his mother Catherine made similar efforts, during which she discovered that on de Valera’s birth certificate ‘name of child’ was given as George. (A ‘corrected certificate’ showing the name of Edward was approved by the Commissioner of Health on June 30, 1916.)”

Not only was de Valera’s birth certificate altered, but so his baptism certificate from St. Agnes was updated. Coogan says that “…the name was originally given as ‘De Valeros,’ and the father’s name as ‘Vivian.’ Someone has changed these to ‘Vivion’ and ‘de Valera’ and altered ‘Edward’ to ‘Éamon.’ I was informed that it is believed that the changes may be in the handwriting of Vivion, Éamon de Valera’s eldest son.” Coogan goes on to comment on St. Agnes: “The church is something of a shrine for de Valera worshippers, one of the few things to survive a disastrous fire which destroyed it was a baptismal font with an inscription recording the fact that de Valera was baptized on it on 3 December 1882.”

Conspiracy theorists can have a field day with three things here: 1) no marriage certificate, either church or civic; 2) an altered birth certificate; and 3) an altered baptism certificate. But as anyone who has ever researched their family history knows, not every family event is registered with the state, names do get misspelled, mostly by clerks who are rushing to do their jobs, sometimes carelessly. In this case, they would also be dealing with immigrant parents and there may have been a misunderstanding because of accents and brogues.

What influence the revised certificates had on the survival of de Valera is not known; every scenario is open to speculation. Coogan quotes de Valera on his missing the firing squad: “…de Valera’s view was that none of the American activity had ‘the slightest influence’ on his escaping execution. He said ‘what was decisive was that Tom Ashe who was also likely to be executed, and myself were court-martialed on the same day and just about the same time when [British Prime Minister] Asquith made the public statement that no further executions would take place except those who had signed the Proclamation.’”

Coogan is not so sure about that. He quotes Judge Evelyn Wylie, the man who sentenced de Valera to death, on why they stopped with Connolly and MacDiarmada on May 12. Here’s the dialogue between Wylie and General Maxwell, the man who ordered all the executions:

Maxwell: We can’t let him off; who is next?

Maxwell: Is he someone important?

Wylie: No. He is a school-master who was taken at Boland Mill.

Maxwell: All right, we will go ahead with Connolly and stop with this fellow [de Valera].

Seeing the irony and sheer luck in all this Coogan commented: “And so James Connolly, whose leg had been shattered by a bullet, was carried to his execution, while Éamon de Valera lived to rule over a state very different from the one Connolly died for.”

In all fairness, as a caveat, it should be noted that, although Coogan has written biographies about both de Valera and Collins, he, nevertheless, remains Collins’ biggest booster and his biography of Collins in the early 1990s helped promote the profile and legend of Collins. Coogan is known to cut Dev very little slack.

So the events that happened on a ten-block stretch of Lexington Avenue – conception, birth, baptism – may have been instrumental in saving the life of the future President of Ireland. So whatever you think of Éamon de Valera – infant victim of the Irish diaspora, bastard, or a true immigrant success story – next time you’re in the Grand Central Station neighborhood and have a few minutes to kill, visit young Eddie de Valera’s New York neighborhood. He lived on East 41st Street, was baptized on East 43rd Street, and arrived in this world on 51st & Lex. It’s a great piece of New York’s Irish history and so important to the history of Ireland itself.

*Dermot McEvoy is the author of "The 13th Apostle: A Novel of a Dublin Family, Michael Collins, and the Irish Uprising" and "Irish Miscellany" (Skyhorse Publishing). He may be reached at dermotmcevoy50@gmail.com. Follow him on his website and Facebook page.