Fascinating Irish newsreel has been digitized by the Irish Film Institute for its Irish Independence Film Collection. 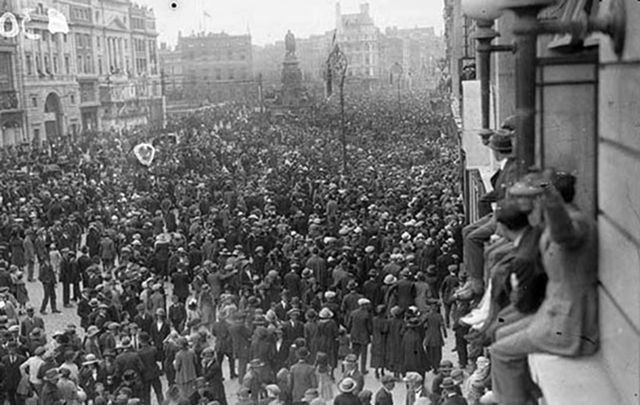 Newly digitized footage can be viewed for free in the Irish Independence Film Collection with the Irish Film Institute.

The Irish Film Institute (IFI) has announced it has digitized archival newsreel footage of Michael Collins, Countess Markievicz, and many others and are presenting them for free in the Irish Independence Film Collection.

The Department of Culture, Heritage, and the Gaeltacht funded the project, most of which came from Pathé Newsreels.

“Much of the footage being revealed has not been accessible since its initial distribution and broadcast in cinemas a century ago,” said Minister of State for Gaeilge, Gaeltacht and the Islands, Joe McHugh.

“We owe an enormous debt of gratitude to all those involved in the project to date and we wish them well in their endeavors in completing the final phase of the work to complete the project.”

“The value of this moving image material cannot be overstated,” said Ross Keane, director of the IFI.

Clips portray the 1916 Easter Rebellion and such revolutionary luminaries as Michael Collins, Eamon de Valera, Arthur Griffith, William Cosgrave and the Countess Markievicz. There are also clips documenting Queen Victoria’s visit to Ireland in 1900, King George V’s visit in 1911, along with views of the funerals of the Lord Mayor of Cork, Terence MacSwiney, in 1920 and Collins’ in 1922.

The quality of the digitally remastered films is superb. This is a treat for any student of Irish history.

The collection of 155 films can be viewed here.

*Dermot McEvoy is the author of the "The 13th Apostle: A Novel of Michael Collins and the Irish Uprising" and "Our Lady of Greenwich Village," both now available in paperback, Kindle and Audio from Skyhorse Publishing. He may be reached at dermotmcevoy50@gmail.com. Follow him on his website or on his Facebook page.