Who was the 1916 Easter Rising hero James Connolly?

The Edinburgh man calling the military shots from the GPO during the 1916 Easter Rising was the “heart” of the rebellion. 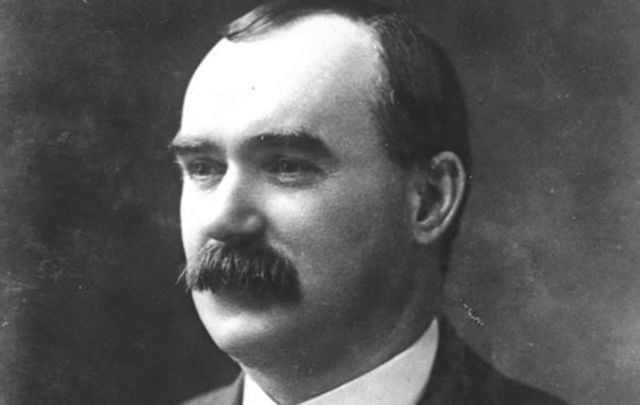 James Connolly, the Edinburgh man calling the military shots from the GPO, was the “heart” of the rebellion. The Irish Labour Party / Flickr

“The Irish people will only be free, when they own everything from the plough to the stars.”

Connolly was born in Edinburgh on June 5, 1868, to Irish parents. He grew up in the slums and his hardscrabble beginnings turned him into a fervent socialist. After working in Scotland and a stint in the British Army, in 1896 he came to Dublin to work for the Dublin Socialist Society. It was his first time in Dublin and he was immediately dismayed that the Dublin working class did not have the same fire in their bellies that he had. So, as he had a family to support, he moved to America in 1903.

Seven years later he returned to Ireland to head up the Irish Transport and General Workers Union in Belfast. After the disastrous general strike of 1913 and Jim Larkin’s departure for America Connolly came to Dublin to head up the local ITGWU—and its Citizen Army.

The boys at the Irish Volunteers kept a wary eye on Connolly and his army. They were drawing up plans for a Rising and were afraid that Connolly might preempt them. In January 1916 they decided to “kidnap” him. For three days he was briefed by members of the Military Council of the IRB—men like Clarke, MacDiarmada, and Plunkett. At first, Connolly was very angry, but as details of the planned Rising were made known to him he became an enthusiastic supporter.

On Easter Monday he was named Vice-President of the Provisional Government and Commandant-General in the Army of the Irish Republic. He marched at the head of his Citizen Army to the GPO and, finding his inner-Teddy Roosevelt at San Juan Hill, commanded his troops: “Left turn. CHARGE!” After Pearse read the Proclamation Connolly exclaimed, “Thanks be to God, Pearse, that we have lived to see this day.”

Pearse may have been the titular “Commander-in-Chief,” but Connolly was calling the military shots from the GPO. He was fearless, venturing out into the streets to direct his men. It was on one of these sorties to Liffey Street, far away from the GPO near the Ha’penny Bridge, that he was seriously wounded in the leg. He made his way back to the GPO and helped plan the evacuation to Moore Street. After the surrender, he was removed to Dublin Castle for treatment for his wound which had developed gangrene.

His condition was such that his trial was held at Dublin Castle. After he was found guilty and condemned to death he made this statement: “We went out to break the connection between this country and the British Empire and to establish the Irish Republic. We believe that the call we thus issued to the people of Ireland was a nobler call in a holier cause that [sic] any call issued to them during this war having any connection with the war. We succeeded in proving that Irishmen are ready to die endeavoring to win for Ireland their national rights which the British Government has been asking them to die to win for Belgium. As long as that remains the case the cause of Irish freedom is safe. Believing that the British Government has no right in Ireland, never had any right in Ireland, and never can have any right in Ireland, the presence in any one generation of even a respectable minority of Ireland ready to die to affirm that truth make sure Government forever a usurpation and a crime against human progress. I personally thank God that I have lived to see the day when thousands of Irishmen and boys, and hundreds of Irish women and girls, were equally ready to affirm that truth and seal it with their lives if necessary.”

His last hours were spent with his wife Lillie and daughter Nora. “My mother and I . . . were driven to Dublin Castle,” Nora said. “On entering we were directed to a flight of stairs. At the top of the stairs were six soldiers with fixed bayonets, and on the floor, about a dozen more were lying on mattresses.

Nora informed him of the executions of Pearse, MacDonagh and the others. “He was silent for a while. I think he thought that he was the first to be executed. Then he said, ‘Well, I am glad that I am going with them.’ ”

"They told me how Connolly was shot in his chair,

They soon made me part of the patriot game."

Perhaps the greatest tribute to Connolly came from one of his the officers in the GPO during Easter Week, a young Cork rebel named Michael Collins: “Of Pearse and Connolly I admire the latter the most. Connolly was a realist, Pearse the direct opposite. There was an air of earthy directness from Connolly. It impressed me. I would have followed him through hell had such action been necessary.”

Read more: How the 1916 Easter Rising gave way to Ireland's War of Independence

* Dermot McEvoy is the author of the "The 13th Apostle: A Novel of a Dublin Family, Michael Collins, and the Irish Uprising and Irish Miscellany" (Skyhorse Publishing). He may be reached at dermotmcevoy50@gmail.com. Follow him at www.dermotmcevoy.com. Follow The 13th Apostle on Facebook here.