The positive ways Ireland is coping with coronavirus

Despite a global crisis, there are moments of positivity to be found all across Ireland. 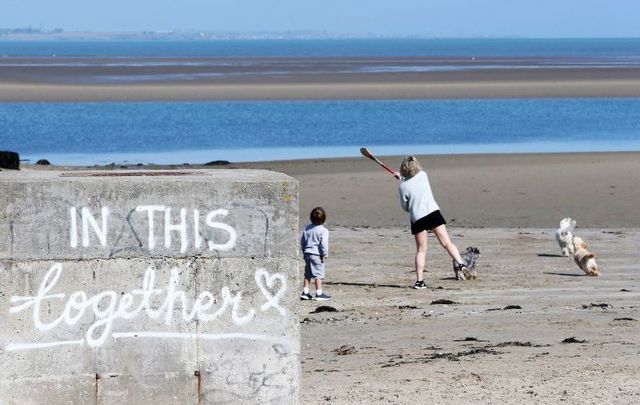 The wonderful ways that Ireland is coming together in a time of crisis. RollingNews.ie

Despite a global crisis, there are moments of positivity to be found in Ireland

As the coronavirus is spreading around the world, many countries, including Ireland, are having to adapt to a new and often frustrating way of daily life.

But it's not all bad news! Irish people have rallied together to try and improve the lives of others around them during this difficult time.

Here are some of the ways that Irish people have come together during this pandemic.

On March 15th, two young Irish men, Cian O Flaherty and Tad McAllister, set up “Feed The Heroes” in an attempt to provide meals to frontline healthcare workers in Ireland.

The GoFundMe page, which originally aimed to raise €250 to buy a few meals for doctors and nurses, turned into a nationwide campaign, raising over half a million Euro in just under two weeks. To date, over 55,500 meals have been handed out to frontline workers, paid for by generous donations from the general public.

4️⃣ weeks 💚🤍🧡☘
5️⃣5️⃣0️⃣0️⃣0️⃣ meals delivered nationwide to 91 sites 🚨
1️⃣5️⃣2️⃣0️⃣0️⃣ donors and supporters 🙌
2️⃣2️⃣0️⃣0️⃣0️⃣ Easter Eggs in 72 hours nationwide 🐣🐥
Thank you for supporting us 💪 and #fuellingthefrontline
Remember the best support you can give #StayHome #WashYourHands pic.twitter.com/f9S142QdA4

Balcony Bingo a success in Irishtown

What was meant to be a one-off Mothers Day event in Irishtown, is being turned into a regular event.

Balcony Bingo, where residents of a block of flats in Irishtown all sat out on their balconies for a fun game of “Balcony Bingo” will be returning for another Bingo session, to be followed by fitness exercises and even a family quiz with prizes for all the family.

Best known for manufacturing GAA jerseys and sportswear, Irish clothing manufacturer O’ Neills has pivoted to making scrubs for the HSE and NHS, to help meet the immense demand for protective gear.

Over 60,000 people, both at home and abroad, have signed up to volunteer to fight the spread of the coronavirus in Ireland.

The recruitment drive was launched on St Patrick’s Day, urging Irish healthcare workers overseas to consider returning to Ireland to help fight the pandemic. Nurses who had either had a career change or retired, have now signed up to do what they can to help

Thanks to all who applied to be on call for Ireland and help #OurHealthService battle against #COVID19. We're delighted to receive over 60,000 applications so far. Interviews have already started with some doctors, nurses, ambulance and lab staff who are ready to work immediately pic.twitter.com/naQf06acuL

An Post do their bit to help the elderly

Irish postal workers will be going the extra mile over the next few weeks, giving a helping hand to Ireland’s elderly.

Postal workers will be picking up groceries when needed, collecting medical supplies and delivering daily newspapers where requested. They will also pick up any post if the senders are elderly or vulnerable and afraid to go to the post office themselves. They also sent everyone in Ireland a postcard, that they could send to anyone in the country for free.

Over the coming days An Post will be dropping postcards to your homes that you can send anywhere in Ireland for free. The written word is a powerful thing, so embrace it and come together 💌 #WriteNowhttps://t.co/JtCk4h7lrC pic.twitter.com/n3DyJQN4s0

It seems every family in the country has turned to baking while staying indoors, causing shortages of flour around the country.

Irish mammies are baking bread and scones more than ever before, and people who never picked up a baking tin in their lives are baking all sorts of goodies to keep morale high.

Charity donations through the roof

Despite the hard and uncertain times, charity donations in Ireland are through the roof. While over 20,000 individuals have contributed to various GoFundMe campaigns, companies are also donating large sums to Irish charities.

Cadbury Ireland has donated €40,000 to Barnardos after their annual Easter Egg hunt in aid of Barnardos was canceled due to COVID-19. Intel has vowed to donate 100,000 pieces of Personal Protective Equipment to frontline health workers. Guinness has also launched its own support fund.

The phone company Vodafone has also done their part to help the elderly of Ireland, donating 1,000 smartphones to those without, helping to connect people feeling isolated in more rural places, and away from family members.

To keep the most vulnerable in our society connected, Vodafone Ireland Foundation is providing older people in isolation with 1,000 new smart phones, pre-loaded with essential apps for communication and emergency services through @ALONE_IRELAND #KeepingIrelandConnected pic.twitter.com/OtOPBBtFER

A digital campaign titled #CreateDontContaminate, launched by RTE in mid-March, has now reached over 20 million people worldwide - and has resulted in endless entertainment for the general public.

The campaign encouraged online influencers to create content from anywhere in their house - with creative challenges in music, comedy, dance, art, story-telling, fashion or beauty.

While most of the world tuned into the wild exploits of Joe Exotic on Netflix in March, Irish families were glued to viral Tik Tok stars to stay entertained, including the exploits of Tadgh Fleming and his family down in Co Kerry, with their hilarious dancing antics.

How is your community responding to the coronavirus crisis? Let us know in the comments!