“Cooking with Katy: Gougane Barra Hotel’s e-cookbook” has also been shortlisted for 2021 Gourmand International Best in the World - Food Culture in the Hotels Cookbooks category.

The Luceys, a union of two mighty Irish hospitality dynasties!

The Lucey family from Cork are delighted by the reaction they've received to their fundraising cookbook, penned during the COVID lockdown.

The book, which was launched in April 2020 to raise money for The Irish Society for the Prevention of Cruelty to Children (ISPCC) charity, has been nominated in the Hotels Cookbooks category for the 2021 Gourmand International Best in the World awards. The award ceremony is due to take place in Paris, the home of gastronomy, in June 2021.

Many families during the Coronavirus pandemic ate and cooked together more often than at any other time. Chef Katy Lucey of the famous Gougane Barra Hotel in Gougane Barra and her daughters, Jane and Ali, cooked to beat the band!

The Gougane Barra Hotel has been in Neil’s family for five generations. His mother Breda’s maiden name is Cronin, and Breda is the Cronin link to welcoming visitors to Gougane Barra for five generations. Breda and her daughter Maria run Cronin's Bar and Café next door to the hotel with a strong emphasis on home-baking. Feisty Breda carves the roast lamb for the hotel restaurant every Sunday in the season. It’s still very much a family affair and all three of the Lucey children, Conor, Jane and Ali worked in the hotel during their school and college holidays. 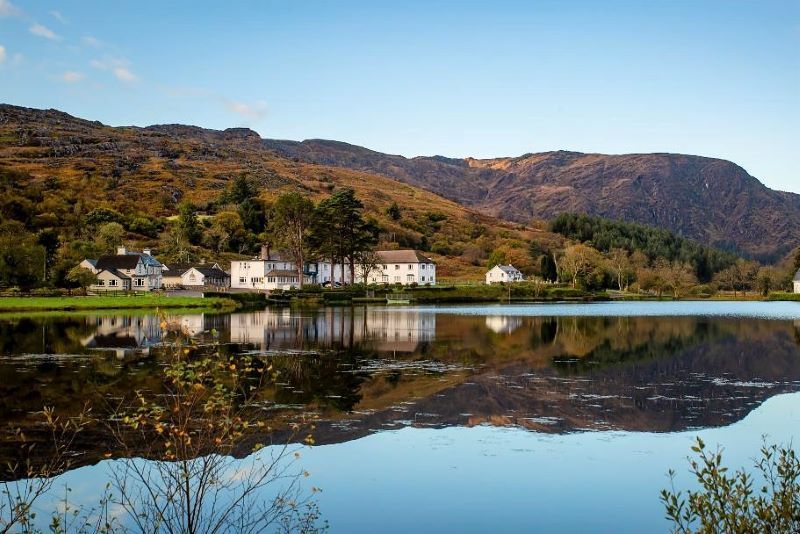 The Luceys. the union of two mighty hospitality lineages, outdid their original donation goal of raising €5,000 for ISPCC Childline and have raised almost €15,000 since the launch of the charity e-cookbook. They can hardly believe it and are delighted with people’s generosity.

The idea for the fundraiser was inspired by the initial success of online recipe videos shared by the family on Facebook at the beginning of lockdown. Their book features recipes such as "Mrs Cronin’s soup", "Ali’s gluten-free chocolate cake" and “Katy’s brown soda bread" (almost everyone who ever tasted Katy’s brown bread had asked for the recipe, so that was a “must-do” recipe).

Katy has always enjoyed sharing her recipes. With the videos and the e-book, her recipes have now gone viral with hundreds of thousands of views all around the world, including Dubai, America, Australia, and Canada.

"We wanted people to be able to bring a taste of Gougane into their homes because we knew we would be shut down for a while," explained Jane Lucey.

This gave them the encouragement to continue and Katy felt “we wanted to show people how easy and enjoyable it is to cook wholesome food at home with simple ingredients, and we were just delighted to share our traditional family recipes which had been handed down through the generations on each side of the family”.

With all the family’s hands-on deck, it was Ali, Katy, and Neil’s youngest daughter who actually came up with the idea of creating the e-cookbook. Katy wrote the 15 recipes, Jane had responsibility for videography, design, and production, and Neil looked after the technical side of the production. The family decided all donations would be in aid of ISPCC Childline.

“We believe it is important to support the ISPCC during these difficult times because their work is making such a difference; empowering, supporting, and protecting young people,” said Katy.

On July 24, 2020, the family hosted a virtual book launch from their kitchen - and donations began to pour in immediately.

“Cooking with Katy: Gougane Barra e-cookbook” won the Irish first prize for the best hotel cookbook and has been shortlisted for the ‘Gourmand International’ World Cookbook Award.

Katy pointed out "more people have donated to download our cookbook since we announced the news of the award, which is fantastic for ISPCC Childline.” You can donate until April 2021.

The e-book contains only personal family recipes. I hope IrishCentral readers will have as much fun trying them out as I did. My family were so delighted with Katy’s soda bread. I just never got it right before and had almost given up on finding the right soda bread recipe for me.

The e-cookbook is being published at the moment and will also be available very shortly in printed form and will be available to buy through the hotel’s online shop. You can access the e-cookbook after making a donation to ISPCC online here.

It is wonderful that people from all around the world have been able to savor a morsel of West Cork during lockdown, providing another great connection to home for many in a time when it is almost impossible for the diaspora to get back home.

In “Ireland the Best 2018, the Insider's Guide to Ireland”, published by Collins, the Gougane Barra Hotel was described as "the purest hospitality you could ever imagine".

Neil and Katy also got a lovely recent review in John and Sally McKennas’ Guides.

It’s top of my personal bucket list of places to visit in West Cork, in I hope a not too far distant future...

Of course in Paris, we’ll all be cheering Katy on in June – especially Niamh Vaughan her cousin from Liscannor in County Clare, a Marketing and Communications specialist who now lives in Paris.