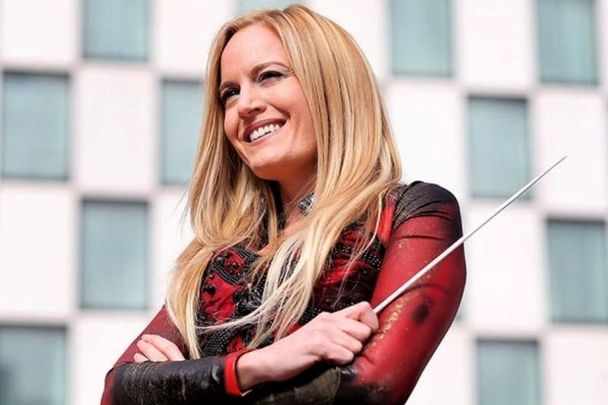 A plethora of trailblazing, inspirational women were celebrated the world over in honor of Saint Brigid's Day – 1 February 2021.

Every year over the past few years, these celebrations have climbed higher up on the festive ladder. Even Covid was not able to dampen “Brigid fever” and in Paris, in the theme of “Leadership in Music: Women Conductors”, the Embassy of Ireland in France, introduced us to three women orchestra conductors.

Another woman at the fore of her profession, award-winning journalist and author Dearbhail McDonald was the facilitator for the zoom discussion. Men were however very welcome and Liam O'Flaherty, the dynamic Cultural Attaché was present to introduce H.E. Patricia O'Brien, Ambassador of Ireland to France.

O’Brien reminded us that on a global basis, only every one out of twenty conductors is female. She pointed out that these avant-garde women could give strength and inspiration to all women and show that gender equality can be accessible, even in enclaves traditionally considered male.

The women presented were Irish conductor and composer Eímear Noone, and two French conductors, Aurore Tillac, Director of the French Army’s Choir and Conductor of the Orchestra of the “French Republican Guard,” and Lucie Leguay, Assistant Conductor at four orchestras including the prestigious “Radio France Philharmonic Orchestra.”

Each of the three iconic women spoke about the route they had taken to become the person, waving a conductor’s stick, while musicians and singers watch their every twitch, for cues and all-important direction.

Eímear Noone made us all proud to be Irish. Apart from her talent, she is a striking looking woman. Masses of long blond hair, an almost ancient Celtic beauty combined with an on the pulse modernism which must have made Brigid sit up and pay attention. If our Matron Saint was beside our Patron saint, in “the mansions above”, they might have both looked down in amazement in February 2020 at the woman from Ballinasloe, Galway, dressed in an outfit that made her look like an Oscar statuette. Eímear made history at the 92nd Academy Awards, becoming the first woman ever to conduct the Oscars orchestra at the famous Dolby Theatre. Eímear believes music is magical and was delighted to bring classical music to the general public at one of the most famous “pop culture” events in the world.

How did she get there? Talent, hard work, and looking at life from a perspective where nothing was impossible. In her town of Kilconnell (population of 480) there were no scientists, no painters, so there was no one to tell her that her dream of being a conductor was insane. Paddy Fahey, a composer, came from her town, and from an early age, she thought that was a job she could do. Later on, she saw a conductor on TV directing an orchestra and decided “now that is what I want”.

Her local school had so few children, that like in many rural Irish schools, they had only three classes of different blocks of ages. Funnily enough, sometimes the education children receive in those schools is the best in the world. Every child was given the gift of a tin whistle. When her teacher heard her playing by ear the theme music of “Glenroe”, the RTE television drama series, she marched up to her parents’ house and told them they had a musically gifted child and they helped her set out on her musical path.

To make it, Eímear left her native Ireland over twenty years ago due to a pure lack of opportunity for women conductors in Ireland. She had given it her all in Dublin, setting up her own orchestra while still at Trinity College, and running and directing it for five years on a semi-professional basis.

Although missing Ireland, she found Los Angeles to be an amazing city. However, she said, “It demands that you sit up and pay your dues and that you put in the hard work”. Instead of sitting on her laurels, she deliberately sought out technically difficult projects such as the “Los Angeles Ballet”. She advanced to ever-bigger budget and technically more high-risk projects. She feels Los Angeles definitely lets you have your chance. However, when taking on multi-million Euro projects to inspire trust, she had to portray an unflinching belief in projects that had never previously been technically tried and tested. She learned to leave the art of self-criticism, so important for her classical music training, outside the door when dealing with LA producers, investors, and directors - people trained to detect any drop of insecurity or fear.

Aurore Tillac spoke about conducting in a very pragmatic way, comparing it with cooking. In her predominately-male environment as conductor of the “French Republican Guard,” she had been exposed to some sexist remarks but was able to maintain her feisty spirit and was never swayed from giving her best and making the best of the wonderful opportunity that a lifetime in music had brought. She started out playing folk instruments as a young child and later attended the French music conservatory.

Lucie Leguay emphasized that we all learn from our mistakes and women should not feel they have to be professionally perfect. Men are not required to show perfection, so why should perfection be expected of a woman at the same grade? She also, however, warned against making the job about gender and pointed out that positive discrimination could be dangerous. She feels the best way to get ahead is by competing with men, on an equal footing. She maintains that changes have to be brought about in female education, from a very young age, in order for things to move forward.

When the three amazing women were asked what advice they would pass on to younger would-be female conductors, Aurore Tillac advised, “hard work pays and to be sure of yourself”. Lucie Leguay said, “stay yourself even if we all need role models” and “nobody can stop you if you know what you want”.

Eímear, among other words of advice, said that every artist is unique and people develop at different rates, at times in rapid jumps, and other periods can be slow and constant. She advised young, future orchestra conductors to try to “be OK with where you are now’.

I thought that was great advice, not only for a future generation of conductors, but for us all in the strange Covid ridden world we currently reside.

The evening ended on a very positive note with H.E. Patricia O'Brien looking forward to Saint Brigid's Day 2022, at a party, with live music, in the Irish Embassy, downtown Paris.