The Association of Irish and Celtic Festivals (AICF) is set to host a virtual Celebration of St. Brigid this Monday, February 1. Tune in here! 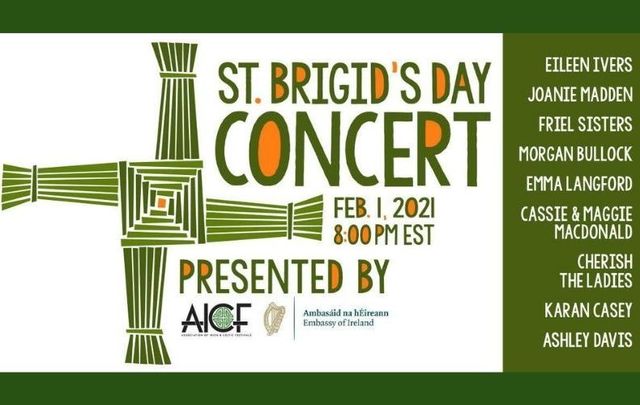 The AICF will host A Celebration of St. Brigid this Monday, February 1 - tune in here! AICF

The Association of Irish and Celtic Festivals (AICF) is proud to be hosting A Celebration of St. Brigid, with support from the Embassy of Ireland, celebrating an Irish saint and Celtic goddess with music from a mix of celebrated female Irish musicians.

St. Brigid is one of Ireland’s patron saints, although not quite as famous as her male counterpart, St. Patrick, but has legends and tales all her own. The AICF, which is dedicated to bringing the Irish culture to the United States via Irish and Celtic Festivals, wanted to celebrate her importance and bring her holiday, February 1, to the forefront.

Taking place tomorrow, February 1 at 8 pm EST, the AICF will be showcasing eight acts from all over the world, highlighting some of the best female Irish music and dance performers. From established acts to up and coming groups,  this all-female celebration highlights an important piece of Celtic culture.

You'll be able to tune into the virtual Celebration of St. Brigid right here on IrishCentral, as well as over on the IrishCentral Facebook page on Monday, February 1 at 8 pm EST.

Erin O’Rourke, from Indy Irish Fest, and one of the executive board members for the AICF organization, said: “After our success with our Irish Christmas Concert, and reaching new audiences through our programming, we wanted to continue our mission of education, and what better way than through St. Brigid’s Day, and a celebration of the female spirit.

"We hope that by highlighting this Irish patron saint and her holiday and stories, we can entertain and educate  audiences with a program that celebrates her, and some of the best female Irish musicians and dancers across the  world.”

This event would not also be possible without the generous support of the Embassy of Ireland, and their continued support of the AICF mission of bringing the Irish culture, via music, education, food, and dance, to those not in Ireland in the hopes that those traditions are never lost.

Emer Rocke, Ireland’s Deputy Ambassador to the United States, had this to say about St. Brigid: ‘‘From Annie Moore to  Mother Jones, Georgia O’Keefe to Maureen O’Hara, Irish women, and their daughters have blazed a trail across every sphere of American life. In the week this country’s first woman Vice President took office, I’m delighted to join friends at the AICF in announcing this celebration of remarkable women artists.

"Rooted in the Celtic festival of Imbolc, Brigid’s day has a history every bit as storied and significant as St Patrick’s. And, in the years ahead, our Embassy team and seven  Consulates – four of which are led by female diplomats - are determined it should be just as widely celebrated.’’

Eileen Ivers is a Grammy-winning, Emmy nominated fiddler. She has established herself as the pre-eminent exponent of the Irish fiddle in the world today and said this regarding this event: “St. Brigid was a light in the darkest of times, a peacemaker, a woman who provided sustenance and a safe haven for all. I’m thrilled to be joining other female artists as part of a livestream concert honoring this beloved Irish saint.

"May the perpetual flame that St. Brigid ignited so long ago, which still burns in Kildare Town’s Market Square today, live in our hearts and shine through the gift of music and community.”

Joanie Madden, who is considered one of the greatest musicians and personalities in the history of Irish music in America, has been the leader and driving force behind the all-female Irish music and dance troupe Cherish the Ladies since its inception in 1985.

Other performers for the AICF's Celebration of St. Brigid include:

An Irish dancer from Virginia, Bullock gained fame last year from her fabulous TikTok videos, mixing hip hop with step dancing. 10 years in, she’s competed internationally and has been offered a chance to dance with Riverdance after the pandemic has subsided.

Casey has long been one of the most innovative, provocative, and imitated voices in Irish traditional and folk music. Her career has spanned twenty-five years from the early days as a jazz performer in George’s Bistro in Dublin to her heady days in New York with the band Solas to her now well-established solo career and she has sold over half a  million albums.

The Grammy-nominated, Irish-American supergroup was formed in New York City in 1985 to celebrate the rise of women in what had been a male-dominated Irish music scene and has since toured the world. These ladies create an evening that includes a spectacular blend of virtuoso instrumental talents, beautiful vocals,  captivating arrangements, and stunning step dancing. Their continued success as one of the top Celtic groups in the world is due to their ability to take the best of Irish traditional music and dance and put it forth in an immensely entertaining show.

Davis is an American singer-songwriter whose musical imagination invites the world into her eclectic sphere. Think Joni Mitchell meets contemporary Celtic and you’ll get something like the creative force of Ashley Davis while this mash-up may classify her work, Davis’s unique ability to capture and cross musical traditions ultimately transcends comparison.

Glasgow natives with family roots firmly entrenched in the Donegal Gaeltacht (Derrynamansher), The Friel Sisters achieve a close blend on fiddle, flute, and uilleann pipes interspersed with songs sang in unison, many from their family and local repertoire. Since the launch of their debut album, they have performed in various venues and festivals across Europe, America, and Asia and have appeared as guests on stage or toured with many internationally known Irish acts.

A daughter of Limerick, songwriter and performing artist Emma Langford has won accolades, awards, and critical acclaim from County Mayo to Milwaukee. Lingering in that liminal space between folk, jazz, and traditional  Irish nuance, Langford has drawn comparisons to Joni Mitchell, Nick Drake, and Janis Ian. Her stage presence and voice however are truly uniquely her own - a mesmerizing blend, best experienced live.

Cassie and Maggie Nova Scotian sisters who put their own 21st Century stamp on the Celtic soundtrack of this nation. Exciting and innovative, their talent is surpassed only by the sheer joy they exude in performance. Alternating between Gaelic and English, traditional and contemporary, haunting and electrifying, the duo is nothing short of mesmerizing. The two have been enchanting audiences around the world with their unparalleled unity of strings, voices, and fabulous percussive step dance.