Larry Tye, author of "Bobby Kennedy: The Making of a Liberal Icon," wrote how Kennedy's "healing magic" could have been used in 2016. That much remains true now, in June 2020. 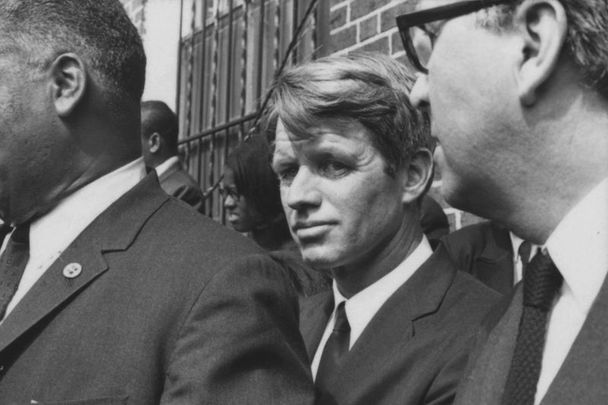 "The Bobby Kennedy of 1968 was a builder of bridges—between islands of blacks, browns, and blue-collar whites; between terrified parents and estranged youths; and between the establishment..."

Editor's Note: Larry Tye is an author and former reporter at the Boston Globe. His 2016 book “Bobby Kennedy: The Making of a Liberal Icon” is now on general release. The below was written by Tye in 2016, but is still relevant now in June 2020.

Bobby Kennedy’s healing magic was on graphic display on a chilly day in May 1968, when his presidential campaign motorcade rode through the then racially and ethnically diverse Gary, Indiana. Richard Hatcher, the black mayor, stood on one side of the candidate in the backseat of his convertible, waving to the biggest crowds his city had ever seen. Clinging to Bobby from the other side was Tony Zale, a Polish American steelworker who had boxed his way out of Gary’s ghettos to the middleweight championship of the world.

Read More: On This Day: Robert F. Kennedy dies after being shot the night prior in 1968

“The open cars rode through the white part of Gary, and then the black part, and Kennedy said precisely the same thing to both races: jobs were better than welfare . . . riots were no solution,” remembered a journalist who was there. “The reaction was equally enthusiastic in each half of the city.”

It wasn’t just that he was the only politician in the nation back then who was embraced on both sides of the railroad tracks. Only Bobby was willing to tell each side not merely what it wanted to hear but what it needed to know.

That campaign of half a century ago was unlike any waged before, by a Kennedy or any other candidate, and it came when America was riven much like it is today. It had lost both its postwar sense of unbounded possibilities and John F. Kennedy, the youthful president who embodied that enthusiasm and promised new frontiers ahead.

In their place were cities in turmoil, whites fleeing to the suburbs as blacks vented their frustrations in the streets, and a political system unable to respond. Now JFK’s messianic younger brother was offering fresh dreams. He imagined a country split less between right and left, or black and white, than between good and bad.

The Bobby Kennedy of 1968 was a builder of bridges—between islands of blacks, browns, and blue-collar whites; between terrified parents and estranged youths; and between the establishment, he’d grown up in and the New Politics he heralded. At age forty-two he was on the way to becoming the tough liberal—or perhaps tender conservative—who might have stitched back together a divided land and whose vision seems at least as resonant in today’s polarized America.

His capacity to reach across divisions of race and class and span ideologies is no accident. While history remembers Bobby Kennedy as he was in that 1968 crusade for president—a racial healer, a tribune for the poor, and the last progressive knight—there was an earlier Bobby whom few recall. Our favorite liberal was nurtured on the rightist orthodoxies of his dynasty-building father and started his public life as counsel to the left-baiting, table-thumping Senator Joseph McCarthy. That younger RFK was a bare-knuckled political operative who masterminded his brother’s whatever-it-takes bids for senator and president.

As attorney general, Kennedy okayed FBI wiretaps of Martin Luther King, Jr., whom he never trusted or liked. Even guerrilla warfare was in his toolkit: Bobby masterminded cloak-and-dagger operations against Communist Cuba that included blowing up railroad bridges, sabotaging crops, and plotting the elimination of President Fidel Castro. His steely conservatism made him an idol to a young Rudolph Giuliani and younger Bill O’Reilly and Karl Rove. It would ensure him acolytes whose views were so antithetical to his leftist fan base that the two groups could neither talk to nor tolerate one another.

That hidden history, however, is precisely what made an RFK presidency more promising than even his boosters realized at the time of his death. He drew to his cause a wider range of Americans than nearly anyone ever had or has since. This man, who grew up mingling with queens, popes, and Hollywood idols, forged bonds not just with Negroes, Chicanos, and American Indians, but with the firemen and bricklayers a later generation would call “Reagan Democrats.” Who else could claim concurrent friendships with the student radical Tom Hayden and the establishment mainstay Mayor Richard J. Daley?

If the multi-racial campaign motorcade in Gary captured Bobby’s public persona, a less documented car trip in 1968 revealed the man-child who charmed audiences across the country. He’d been visiting a suburban New York hospital for mentally retarded children and, on his way out, he impulsively promised the nine kids he was talking to that he’d take them out later for his favorite food, ice cream.

Knowing his jam-packed schedule, neither his aides nor the doctors believed him. But ten minutes later he was back, helping the shouting youngsters dress, piling them into his chauffeured car, and letting each of them pick out “one thing” at a nearby store that sold ice cream and candy. Driving away from the hospital afterward he joked, “When those kids tell their parents that Bobby Kennedy took them for a ride and bought them ice cream, they’ll never get out of that place.”

How hard Americans fell for Bobby is apparent not just in his presidential bid that was catching fire or his accomplishments as attorney general and senator. Equally winning was his boyishness, with the country’s collective memory of him framed by that Kennedy smile and an unruly cowlick that flopped onto his forehead.

In the history of America, there have been but two non-presidents with whom our relationship was so intimate that we recognize them by their initials—RFK and MLK—and we must reach back to Teddy Roosevelt to find even a president known by an appellation as dear as Bobby. He was, in a way, our little brother, too, which made the loss that much more harrowing when, hours after his most momentous political triumph, an assassin halted his campaign of conciliation.

Those two Kennedy brothers, both taken from us too early, are at times melded as one in our consciousness. But as they spent more time together as adults, their defining distinctions in temperament and outlook crystallized. Jack would always be the handsome older brother whose silky-smooth polish made begrudging Bostonians tag him as a “Fifth Avenue Catholic” and “Harvard Irishman.”

Bobby was all Gaelic, bristling with energy and trusting his gut. If the Church had been their calling, Jack would have been pope, Bobby a parish priest. Jack looked past women he met unless they were young and gorgeous. Bobby was interested in nearly everybody, grasping a hand and peering into a face in ways that made a person feel a genuine connection. Each stood as the other’s best man when they married, but when Jack wanted to relax, he turned to his even younger brother Ted, not the more prudish Bobby.

When Joe offered all his children one thousand dollars for not drinking until age twenty-one and another thousand for not smoking, Bobby collected, Jack indulged. “Jack has always been one to persuade people to do things,” his father said. “Bobby tends to tell people what to do.”

The ongoing fascination with Bobby Kennedy’s story turns around the grand what-ifs. Could he have won the Democratic nomination and been elected president if he had lived? Would he have carried his raw and untested idealism into the White House and sustained it in ways that defied his brother and could have renewed America? Unlike Jack, Bobby died before he had a chance to deliver or to disappoint. That the path led instead to President Richard Nixon, whose cynicism made him Bobby’s polar opposite, adds to the heartache.

His era’s most nostalgia-wrapped figure, Bobby was also its most avant-garde. He embodied the classic Kennedy blend of godawful disagreeable and transcendent good. But he was more passionate than his brother the president, more provocative, and more accessible. Half Che Guevara, half Niccolò Machiavelli, Bobby was a shaker-upper dedicated to the art of the possible.

That he could change so substantially and convincingly over the course of his brief public life helped restore a changing America’s faith in redemption. In the end he could become this nation’s high priest of reconciliation precisely because he had once been the keeper of our darkest secrets.

For more on the author, visit Larry Tye's website, larrytye.com.

Larry Tye's "Bobby Kennedy: The Making of a Liberal Icon"