Gullible Trump swallowed all of Putin's lies like the blowfish he is. 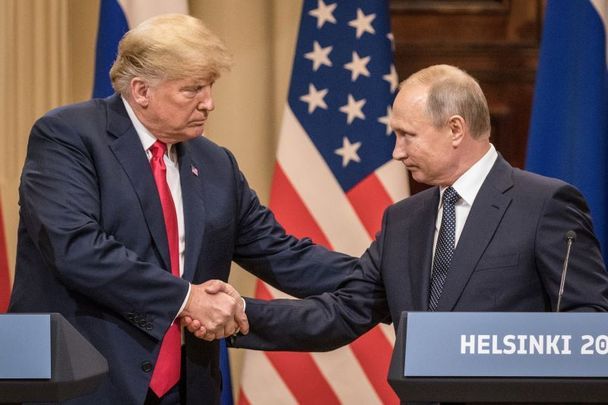 One of the most farcical angles of the Russian assault on Ukraine is Donald Trump’s insistence that he would have faced down Vladimir Putin.

That is despite every piece of evidence to the contrary. Trump blocked arms sales to Ukraine, demanding that newly elected leader Volodymyr Zelenskyy,  investigate Hunter Biden first.

He made clear by that action that he was never serious about defending Ukraine. Trump was basically prepared to let the Ukrainians face Russia with pop guns if Zelenskyy denied him his inquiry.

As the former president’s former National Security Advisor John Bolton put it, Trump would not have been able to find Ukraine on a map, and the reason Putin did not march on Ukraine during Trump’s term was he expected Trump to withdraw from NATO in a second term.

If that had happened, Putin would be halfway to conquering Poland now, with drummer boy Trump beating a victory tattoo from the rear.

Trump made it clear that his priority was to quit NATO and criticized the body at every opportunity. According to aides, he was set to announce that the U.S. would leave NATO on two occasions but was talked out of it.

Then there was his bromance with Hitler Putin, where Trump made no secret of how starry-eyed he was when in the company of the Russian thug. It was a major crush.

When Putin lied to him about interference in the 2016 U.S. presidential vote, Trump took the dictator’s words over those of his own CIA and intelligence officers.

“President Putin says it’s not Russia,” Trump blathered.  “I don’t see any reason why it would be.”

Can you imagine Putin saying “I believe the CIA, not my KGB,” or whatever his secret service is known by these days?

If there is one thing Putin does well it is lie, lie again, and then lie more. He denied any interest in an invasion of Ukraine, lied about the reasons for it (claiming Zelenskyy, who is Jewish, was a Nazi), and lied to his own citizens by portraying his war as a minor military operation brought on by Ukrainian treachery.

Gullible Trump swallowed it all like the blowfish he is.

He was not alone. Trump sidekick Sean Hannity praised Trump for being “very strong” in his disastrous press conference where he said he believed Putin, not his own intelligence services.

Even Newt Gingrich railed at Trump, calling his appeasement of Putin at the press conference the worst moment of his presidency.

There is no question Trump has a soft spot for dictators, the more hardline the better. Last weekend, he was praising Kim Jong-un of North Korea as a great leader despite his record of mass murder and jailing and starvation of up to a million of his people.

Even Trump’s Vice President Mike Pence has stopped drinking the Kool-Aid. Last weekend, he stated bluntly that the Republican Party has no place in its ranks for Putin apologists, a clear dig at his former boss.

The pro-Putin rats are racing off the foundering ship as the bloody scenes from Ukraine haunt our hearts every day with no end in sight.

The only silver lining is seeing America and many other countries come to their senses and finally understand what indulging Putin has wrought. But as Yeats warned, it may be too late.

People like Trump and Putin have “fed the heart on fantasies. The heart's grown brutal from the fare.”