Trump is making it all up - the Mexican border and terrorists

US President Donald Trump is increasingly desperate to deny the truth and allege that the “crisis” on the Mexican border is real. 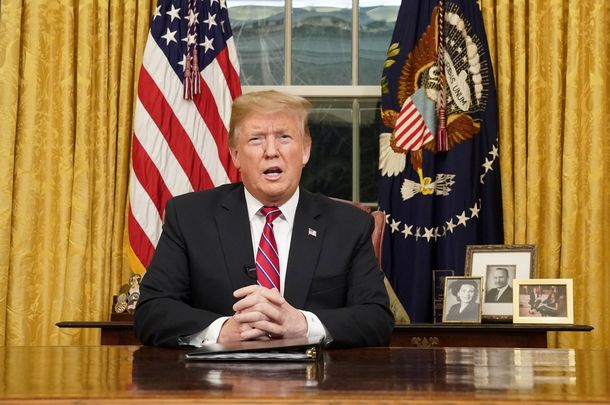 US President Donald Trump is increasingly desperate to deny the truth and allege that the “crisis” on the Mexican border is real.

President Donald Trump's TV speech on Tuesday evening was a parade of old hits - how immigrants were threatening us, how Americans should be afraid, how the wall would make us safe forever. Go back a century and a half and he could have been describing dangerous Irish immigrants from the Great Famine.

How many of the 19 Al Qaeda 9/11 bombers snuck across from Mexico? None.

Where did the underwear bomber come from? Through an airport.

Where can we most expect terrorists to enter the US? Via international flights, not the Mexican border.

So why the obsession. It is clear Trump is a divider, intent on scaring his petrified white base all the more. But he is crying wolf and the government shutdown is being blamed squarely on him by the American people according to polls. It didn’t work in the midterm elections and it is not working now.

Any terrorist knows better than to try and cross over from Mexico with border guards everywhere, vicious coyote gangs preying on migrants, not to mention sticking out like a sore thumb.

Trump and his sidekick Kirstjen Nielsen, Secretary of Homeland Security, the immigration overseer, however, insist the house is burning down even though no flames are visible.

"The threat is real. The number of terror-watch list encountered at our Southern Border has increased over the last two years."

The threat is real. The number of terror-watchlisted encountered at our Southern Border has increased over the last two years. The exact number is sensitive and details about these cases are extremely sensitive.

However, the American Business Immigration Coalition (ABIC), funded by the Koch Brothers of all people, firmly rebut the Trump argument.

According to public records from the Department of Justice and two former counterterrorism officials, no immigrant has been arrested at the southwest border on terrorism charges in recent years.

ABIC note that the Cato Institute, another right-wing think tank, also combed through DHS data over the last 40 years and found that, "so far, there have been zero people murdered or injured in terror attacks committed by illegal border crossers on U.S. soil."

Only seven terrorists from special interest countries, all of whom entered prior to the government putting those countries on a list, even entered the U.S. illegally by crossing a land border. Two of them were arrested within hours of doing so, two other received asylum, and none of them crossed the Mexican border.

So why is Trump squandering his presidency on a clearly incorrect assumption?

Because he believes it, like the size of his inauguration crowd or how Russia is our friend or he did nothing wrong trying to coerce the head of the FBI to do his bidding and fired him when he would not.

He is a fantasist and his condition has been revealed for all to see.

Here is his address in full:

What did you make of Donald Trump's address? Do you believe that he is exaggerating the threat of illegal immigrants while ignoring the issues of those who seek legitimate asylum in the United States? Let us know in the comments section below or on social media.

Read more: Number of Irish deported from the US has almost doubled since Trump became President