The latest figures for 2018 show that 47 Irish people were removed from the US last year. 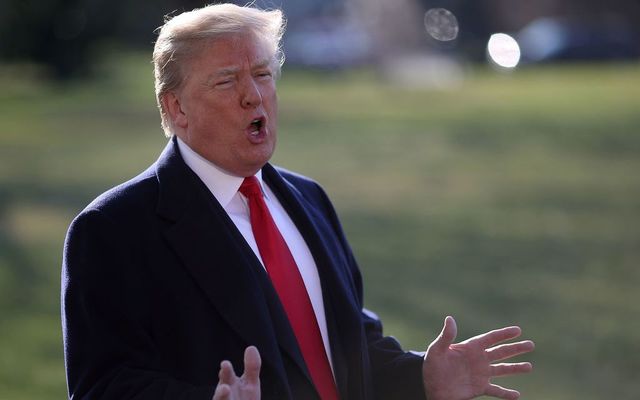 U.S. President Donald Trump answers questions from the media after his firing of Secretary of State Rex Tillerson before departing from the White House on March 13, 2018, in Washington, DC. Mark Wilson/Getty Images

The latest figures for 2018 show that 47 Irish people were removed from the US last year.

Figures released for 2018 show that the US Immigration and Customs Enforcement (ICE) removed 47 Irish people from the US last year, almost double the number who were deported the year before Donald Trump became President.

ICE has stated, however, that they have seen a “significant” increase in removals as President Trump pushes his stricter immigration policies.

In January 2018, the deportation case of 19-year-old Galway-born Dylan O’Riordan added to the fear among the undocumented Irish in the US, building on concerns that they would soon be targeted.

The story of O’Riordan, who lived undocumented in the US for seven years after his parents brought him to live in Boston aged 12, added to the increasing number of cases of Irish people being detained by the ICE.

Speaking at the time of O’Riordan’s removal, Kieran O'Sullivan of the Irish Pastoral Centre in Boston claimed that O’Riordan’s case was just one of a number that stoked fears among the undocumented Irish to a height he had never previously witnessed.

"We would see comprehensive immigration reform as being the answer to the problems we are facing today," he told RTÉ.

"The majority of the undocumented Irish here work hard, they pay taxes and they're only looking to make a better life for themselves and their families and this notion that's out there, that they're a threat to the country, is nonsense."

While fear among the undocumented Irish has been on the rise, several of the reported cases of the removal of Irish citizens over the past two years involve those who had an outstanding criminal charge or an arrest warrant.

In another high-profile Irish deportation case in June 2017, well-known Boston Irish figure John Cunningham was picked up by ICE and removed from the country.

While Donegal-born Cunningham was initially applauded as a fine community leader and his detainment shocked the Irish community in Boston, it later emerged that Cunningham had a warrant issued for his arrest. The warrant was issued in 2014 after he was accused of not carrying out electrical repairs in a house for which he had been prepaid $1,300.

Earlier in March 2017, an undocumented man from Galway was arrested by ICE when they carried out a raid on his residence in the Boston suburb of Quincy. He was already due in court to face charges of drunk driving and related charges. Another Irishman, from Co. Antrim, was also held for deportation in November 2017 amid accusations that he was involved in gun-running for the IRA.

The FBI investigated the gun-running claims but found no reason to arrest him. They informed ICE, however, and the immigration authorities arrested him.

Do you agree with the stricter immigration policies? Let us know in the comments section, below.