There is no reason to have sympathy for Theresa May after her resignation. 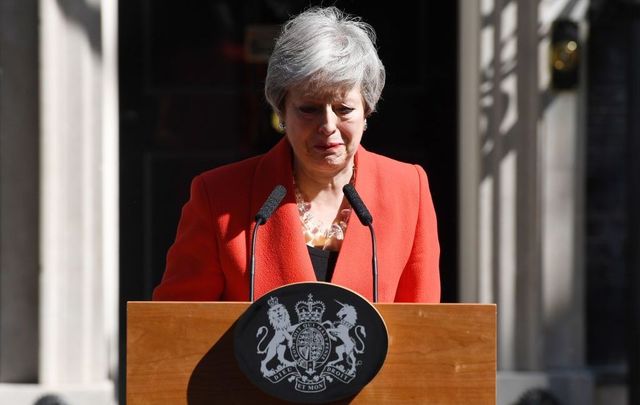 Prime Minister Theresa May makes a statement outside 10 Downing Street on May 24, 2019, in London, England. The prime minister has announced that she will resign on Friday, June 7, 2019. Leon Neal/Getty Images

Theresa May's resignation is a result of her own bad decisions.

It would be hard not to feel some sympathy for Theresa May as she tearfully announced she was leaving office but she brought her Mayday disaster moment down on herself.

If she had shown an ounce of political foresight the Brexit issue would be in the throes of being resolved via an agreed exit deal struck with the European Union.

May was elevated by her colleagues with that clear mandate to sort out Brexit after the other genius, Tory leader David Cameron, fell on his sword after his needless Brexit referendum swallowed him up.

Brexit was won by the Big Lie tactic, that leaving was as easy as waving adieu and reverting to the“Good Old Days” made in Britain economy.

As the London Times writer Jenni Russell stated: “Delivering Brexit was always going to be difficult because it had been sold on a lie — that leaving would be simple and the future prosperous.”

British Prime Minister Theresa May says she will resign, triggering a contest that will bring a new leader to power https://t.co/xdgH4YKZFs pic.twitter.com/bEZf0Pcz1S

It was up to May when she assumed office to clarify just what Brexit entailed and to treat it as a national emergency which needed to be sorted out.

For instance, the issue of the Irish border had not even been mentioned during the campaign.

The obvious course was to accept the referendum result then convene an all-party committee to form a consensus on how to proceed as soon as possible.

The Irish government did exactly that with the gay marriage and abortion referendums, and a healthy consensus was reached and passed overwhelmingly by voters.

Theresa May didn't publicly break down over Windrush, or Grenfell, or disabled people having their benefits cut, or children driven into poverty.

In the end, she only publicly shed a tear over her own career. pic.twitter.com/gyHOG7xlg6

Instead of taking the consensus route, however, May chose to join with her right wingers and define Brexit in the hardest possible terms, elevating the hardline No Deal Brexiteers to the center stage.

To no one’s surprise, the focus on the right meant that any accommodation with the more moderate factions proved impossible.

To make things worse May called a snap election and found herself afterward kept in power by the hard right unionist DUP in Northern Ireland.

From there the Brexit debate became a shambles and a humiliation for May as she failed in successive efforts to pass a Brexit bill by huge margins.

Theresa May is right to resign. She's now accepted what the country's known for months: she can't govern, and nor can her divided and disintegrating party.

Whoever becomes the new Tory leader must let the people decide our country’s future, through an immediate General Election.

It all ended in tears to no surprise and future mayhem ahead especially if hardline Brexiteer Boris Johnson is elected’ If he goes for a No Deal Brexit the proverbial dung will really hit the fan.

May resigns as a failed prime minister but she can look in the mirror and blame only herself. Supping with the hardline Tories ended up with her in the soup. We should feel no sympathy for her.