Recounting my childhood "rite of passage" in Northern Ireland with schoolmate and fellow altar boy Eddie Holt years ago, before The Troubles. 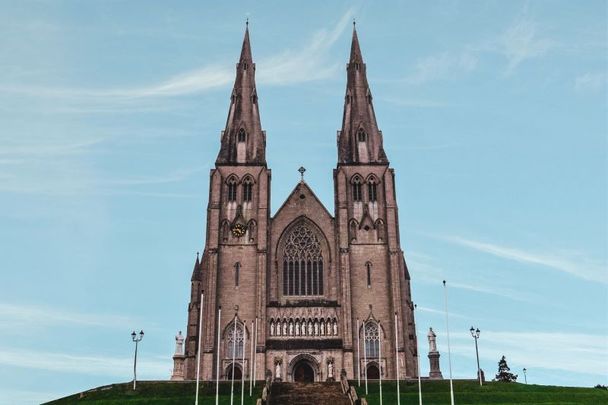 I grew up in the town of Drogheda, 25 miles from the border, after my father moved our family there from Tipperary when he got a promotion as a schoolteacher.

We were seven kids in all. This was the early 1960s before The Troubles started.

I can probably safely say that as a child, Northern Ireland meant just one thing to me and my bosom buddy Eddie Holt, and it had nothing to do with politics.

Ireland may have been the most repressed country in the world at the time with absolute mind-control exercised by the clergy.

Northern Ireland was bad, but to two young gaffers nearing puberty, the North meant one thing -- dirty pictures in magazines.

We saw it for our own eyes -- half-covered female breasts, short and skinny dresses, mini skirts. Lovely young ladies in various states of undress. Wowzer!

It was enough to give two curious young boys yearnings to go to the North, but we had no mode of transport and no hope of getting there so we just continued as clueless as ever about our awakening bodies, and there was certainly no one to ask.

We regularly confessed bad thoughts in Confession which, when I think of it now, probably excited quite a few of the priests, many of whom turned out to be pedophiles.

I should mention there were of course decent priests too, especially among the Franciscans who hewed to a vow of poverty and attended to the sick and the dying.

Remember, this was an Ireland where Tampax had been banned because the archbishop of Dublin, one Charles McQuaid, decided that the application of them might get young girls excited.

Our role model was supposed to be the Virgin Mary who didn’t ever seem to have any breasts at all, and there was a heavy emphasis on the virgin part. It was hard to imagine her in a mini skirt, as Eddie said.

At last, the opportunity occurred when we, two devout altar boys, became part of the local Franciscan Church pilgrimage to Armagh in the North, seat of the Catholic Church in Ireland. There would be a stop-off in Newry where we could wander around for a while. Eddie and I had no question at all about where we were headed.

The Troubles were a distant drumbeat and frankly, we knew very little about the gathering storm.

When the great day arrived, we carried through on the ritual, kneeling during Mass then sitting for over an hour in the huge cathedral and being lectured at length on the issue of our morality and need to love God.

Finally, we made it to Newry on the bus back home, and we charged off like a couple of wild animals.

There was a store where smut was sold and there was even an early device where you looked through a glass screen and turned a handle and pictures of barely clad women flitted by. Eddie took so long I had to push him off the pedestal to get my look in at this treasure trove.

We had saved money to purchase our pleasure dome magazines. One was called Escort, another called Club International.

We stuffed them up our sweaters and made our way back to the bus. We would be kings of the hill when we saw our classmates.

Years later, Eddie, who became an Irish Times columnist and media lecturer, and I laughed long and hard at our childhood rite of passage. A few years after our escapades, The Troubles began and Northern Ireland was aflame. “Nudie” magazines were long forgotten.

But our purchase beat the Virgin Mary hands down and allowed a chink of light and fun into a grim time. We laughed "in my chains like the sea" as Dylan Thomas once wrote.