Momentous events were occurring this week one hundred years ago as Ireland was split apart. But now, more than ever, the winds of change are blowing. 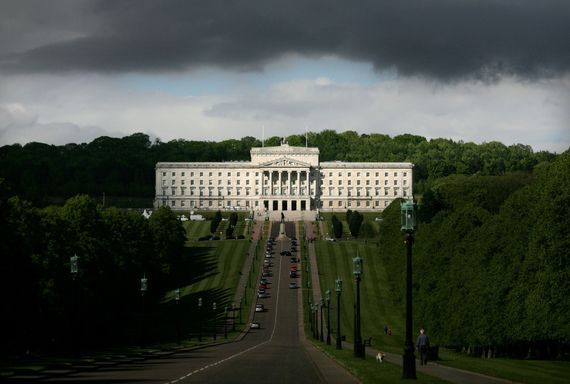 The partition of Ireland occurred 100 years ago tomorrow, but every Irish person down to this generation continues to feel its impact.

Two and a half counties out of 32 refused to join a free Ireland, ignoring the result of the 1918 election where Sinn Fein won 73 seats and the Unionists won 22. (The Irish nationalist party won 6)

Sinn Fein had a clear mandate for an Irish parliament, where they would be Irish citizens, not subjects of the crown.

Sinn Fein wiped out John Redmond’s Nationalist Party which was doomed once conscription for the First World War was brought in.

It was one of De Valera’s finest hours. As the top remaining leader from 1916, it fell to him to make the case for the republic to the Irish, including those who had followed Redmond. He did so elegantly.

He spoke of his sadness over the catastrophic Great War and the “flower of our manhood”, the “generous Irish youth” who had sacrificed themselves:

“Their bones today lie buried beneath the soil of Flanders, or beneath the waves of Suvla Bay, or bleaching on the slopes of Gallipoli, or on the sands of Egypt or Arabia, in Mesopotamia, or wherever the battle line extends from Dunkirk to the Persian Gulf. Mons, Ypres, will be monuments to their unselfish heroism, but the land they loved dearest on earth… still lies unredeemed at the feet of the age-long enemy.”

Little was heard from Redmond after that.

It was a straightforward election result; the people of Ireland had voted overwhelmingly for an Irish parliament.

But the unionists were having none of it.  Democracy be damned, there would be a sectarian headcount, and a few nationalist majority countries would be split asunder and moved behind the partition line.

Could it all have turned out differently? Of course it could, but Ireland was a mere pawn in British politics by 1921. If the election had been recognized as a federal Ireland, giving proportionate power to each of the four provinces, it might have had a chance of success. Instead, as Abraham Lincoln sagely remarked about the incredibly divisive issue of slavery: "A house divided against itself can not stand".

Even Sir Edward Carson, the mouthpiece of unionists, did not want partition except as a very last resort.

In his maiden speech in Westminster, he stated: "What a fool I was. I was only a puppet, and so was Ulster, and so was Ireland, in the political game that was to get the Conservative Party into power."

Strange how those words could hold today.

It is actually unclear what Carson wanted. He fought to keep Ireland as one under British rule, but he abandoned that stance  When partition occurred he warned the unionist leadership to treat Catholics well. "We used to say that we could not trust an Irish parliament in Dublin to do justice to the Protestant minority. Let us take care that that reproach can no longer be made against your parliament, and from the outset let them see that the Catholic minority have nothing to fear from a Protestant majority.”

Fat chance. Instead, there was a pogrom in nationalist areas and 500 died. The unionists allowed one Catholic in 50 years into power. They passed one nationalist proposed bill that had to do with wildlife.

Carson, of course, understood the south better than any unionists in the North. He was born and raised in Dublin and Laois and lived most of his life in either Dublin or London.

He always described himself as Irish and stated how proud he was to be an Irish representative in the British parliament.

He would surely shudder at how much his unionists have bolixed up Northern Ireland.

Unionism is in deep trouble outflanked demographically and led by pygmies. Polling in the Irish Independent last week basically reiterated that about 75 percent of people in Ireland support a united Ireland, no different from 1918. Tellingly, the biggest support is among the youngest voters.

Meanwhile, unionism is finally self-destructing after 100 years. Their likely new leader Edwin Poots is a young-earth creationist, who believes the coronavirus infected six times as many Catholics as Protestants, believes in conversion therapy to turn gay men and women straight, and would refuse to let them give blood.

That's how far unionism has come in 100 years.  Somewhere, Carson must be shrieking. And if he looks south, he sees Sinn Fein battling to be the largest party and will likely attain that position in Northern Ireland shortly.

So how is that partition going for you now Mr. Carson?

As we scan back through the years, we see anew the mayhem that drawing a line on a map, as the British also did in India and Iraq causes. May 3, 1921, was a day that will forever live in infamy but the last act when the people in a free vote for a united Ireland is still to be unspooled. We may not have to wait too long for it.