Michael Dowling, the Irish-born CEO of Northwell Health, discusses navigating coronavirus in his new book "Leading Through a Pandemic." 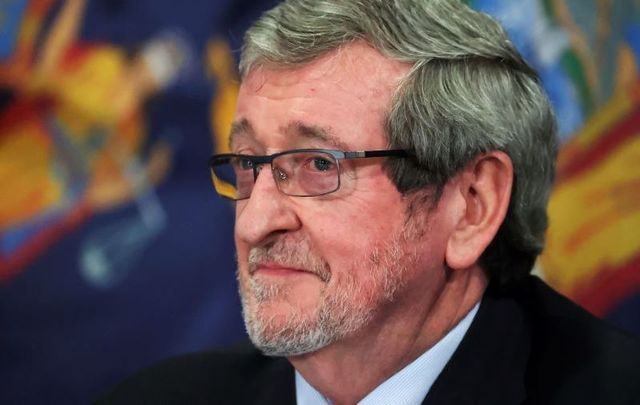 Niall O'Dowd, founder of IrishCentral, reviews "Leading Through a Pandemic," which hits bookshelves on August 25.

The coronavirus, the greatest public health crisis in United States history, will spawn a thousand books, TV programs, and even movies.

However,I doubt any will be as revealing and relevant as “Leading Through a Pandemic” which is written by Irish-born Michael Dowling, Chairman and CEO of Northwell Health, one of the largest hospital groups in America, and co-authored by Charles  Kenney, the Chief Journalist at Northwell Health.

Dowling set out to write the manual on how to tackle a pandemic based on the titanic struggle his own hospital group Northwell Health encountered as the 23 hospitals, nearly 800 outpatient facilities, and 73,000 employees faced into the eye of the storm. No other hospital group faced such numbers. 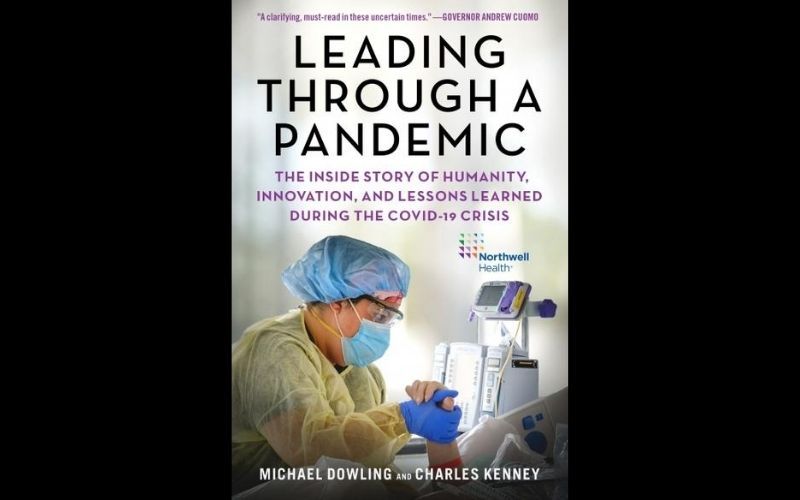 "Leading Through a Pandemic The Inside Story of Humanity, Innovation, and Lessons Learned During the COVID-19 Crisis," by Michael J. Dowling and Charles Kenney (Skyhorse Publishing)

When the first wave was over, close to 50,000 Covid patients had passed through the Northwell system. Because of adequate preparation and specific plan of action to deal with the deluge, far more patients survived than even the experts thought possible.

The planning and execution led by Dowling was a management class in preparation and concerted action. His leadership from the front, especially visiting the Intensive Care Units and most serious patients, ensured that the morale of a workforce hit with an illness tsunami stayed high in spite of everything they faced.

Dowling has also allowed the frontline heroes, the nurses, doctors, social workers, and executive team, to tell their stories, making for a powerful human narrative alongside the great issues of how federal and local government and the public health service fared with the unique challenge of slowing a pandemic.

It is hard not to feel emotional as one worker, not even a member of the medical staff, describes how he stayed overnight so he could hold the hand of a dying patient who otherwise would have expired alone. The caring culture is deeply embedded at Northwell as many such instances make clear.

In another case, a mother giving birth died from Covid as did her husband soon after, leaving an orphaned new-born baby.

Northwell was directly in the path of Covid-19 when it silently slipped ashore in February or  March, spread mostly by travelers from Europe and Asia through New York’s two major airports, Kennedy and La Guardia, both near the heart of the Northwell empire of hospitals.

The US reaction was at first disbelief, then a deep sense of foreboding and fear. The history books revealed that the disastrous Spanish Flu of 1918 had left 50 million dead and it appeared, for all the wonders of modern medicine, the world in 2020 was equally as defenseless.

As Dowling writes, “Suddenly there was a terrifying pathogen which kicked down our doors and fought us for control ... a new disease with no known cure that no one knew how to treat.”

Worse, New York was the perfect incubator with families packed tight in small apartments and a population density no other city in the United States came close to matching.

The dark days at the beginning of the pandemic are described. Disaster struck Elmhurst Hospital in Queens as its overflowed emergency room failed to cope with the rush of Covid patients and bodies were stacked in freezer trucks.

Northwell was spared the worst, due to pre-planning which dated all the way back to 9/11 when famed FBI New York head John O’Neill told local NY hospitals that a possible terrorist attack could happen in New York, an FBI associate even naming Bin Laden as the possible suspect before 9/11 happened.

After O’Neill’s warning, Dowling ensured Northwell had a disaster plan based on a simple truth: “bad things will happen, we must be ready." The advance plan started with terror attacks, later Ebola, and then a pandemic. For a pandemic, planning covered precisely how to use every available inch of space for new beds and working out a cohesive plan of action for ferrying sick patients to other Northwell facilities depending where the greatest need arose.

Without the early planning for integration and load shift between hospitals, there would have been a dozen Elmhursts on Long Island and Queens alone.

The other innovation was to end all other surgery unless critical and repurpose every medical person on staff irrespective of their specialty to help save Covid patients. Crucially, Governor Andrew Cuomo slashed the red tape that stopped doctors from out of state practicing without a New York license and also removed any malpractice action against doctors who were providing care but not in their specialist area.

Dowling also led the drive for the integration of all the major hospitals in the New York area to share and send patients to facilities where they could be treated irrespective of which hospital chain they belonged to. He also waded into the bureaucracy, slashing red tape to make things happen faster.

To their great credit, the usually competitive hospital groups all found a way to work together. When overflow threatened system-wide, there was a Navy hospital ship available, as well as the Javits Center and a field hospital in Central Park, which were all new innovations Dowling put it together with other hospital chiefs.

Governor Cuomo, who knew Dowling as a long time family friend, who had worked with his father Governor Mario Cuomo, weighed in also. He was also strikingly impressive with his “just the facts” presentation in daily briefings.

Dowling has sharp words for President Trump who went AWOL during the crisis and fought the scientists every step of the way, greatly undermining the ability to put together a nationwide effort.

Dowling believes the lack of trust in science is a terrible consequence of the Trump era and must be addressed.

As for the future, he knows Covid-19 has not gone away but it is no longer a mystery as to how it kills, and vaccines and early treatment medicines are all hopefully in the works. He makes an eloquent plea for more resources aimed at minority communities who took. the worst of the pandemic. He also makes clear that the emergency equipment fiasco can never happen again and US manufactured PPE gowns must be created as global dependency on China for supplies proved disastrous.

This book is a must-read for hospital officials everywhere, a from-the-front-lines look at Covid-19 and how it must be dealt with, Dowling has done the states a great service by providing a roadmap for treatment and hopefully, ultimately a cure. This is a book you can’t afford not to read.

Leading Through a Pandemic - By Michael Dowling and Charles Kenney.  $24.95 from Skyhorse Press.