"Kelly had a Colombo style -- low key, unobtrusive, just the facts. He turned out scoop after scoop and his reputation soared." 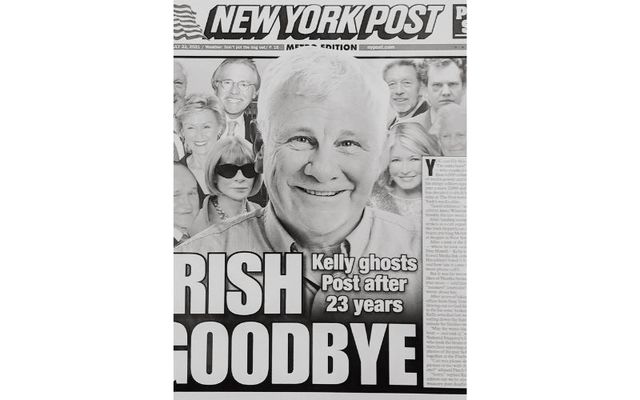 “Keith Kelly, Irishman”, writer of New York Posts's Media Ink, is retiring and will be sorely missed in the New York media landscape.

Many moons ago the Irish Voice shared the same floor on Park Avenue South with another media start-up called Magazine Week.  It wasn’t long before a tousled, red-haired editor for that publication stuck his head in our door and introduced himself as “Keith Kelly, Irishman.”

That he certainly was, and he never lost his Irish affinity as he went on to greater things at the New York Post.

As a sideline, Kelly created an Irish American charity known as the Kelly Gang which included famous Kellys from all walks of life and raised $1 million for charitable causes.

As writer of the Media Ink column twice weekly in the New York Post, Kelly was the most powerful media columnist in America.  Last week he finally retired from the job after 23 years.

He was of the golden generation of Irish American New York columnists like Jimmy Breslin, Pete Hamill, Jim Dwyer, Dan Barry, Michael Daly, all princes of the city at a time when tabloids ruled and columnists had amazing power and huge followings.  It was when hard-bitten tabloid coverage dominated the media.

There was no Twitter, so scoops lasted for days at a time before competitors caught up.  Kelly set himself quickly apart on the media beat at a time when massive change was coming.

He rode those winds of change to become a legendary figure in the news biz, so vital a figure that even Rupert Murdoch, a complete political polar opposite, sang his praises on his retirement,

“Keith defined the industry he covered,”  Murdoch told The New York Times. “He worked stories hard, as his sources well know, always unabashed to report the truth. I’m grateful to him and wish him the best in retirement.”

Ironically, Kelly would never have taken the job at the Post but for Murdoch nemesis Pete Hamill.

As Kelly himself recalled in his farewell column, “When the Post came knocking in July 1998, Pete Hamill had already left the Daily News...but as my lifelong literary hero, I had to get his advice. My politics, like Pete’s, were generally left of center and I worried at the time about the Post’s decidedly right-of-center bent. But Pete advised it probably would not be a problem if I stuck to what I was hired to do and did it better than anyone.”

That he certainly did.  Even as tabloids declined and the Post foundered Media Ink remained the bible of the status-obsessed, big beast, publicity-hungry celebrities of the day. It was the go-to column for Anna Wintour, Martha Stewart, and Tina Brown to name a few.

Kelly seemed to have sources everywhere, and a New York Times profile noted the sheer fear and terror a phone call from Kelly created in the media publisher’s mind.

“You would dread seeing that he called, he just had sources everywhere,” said Janice Min, the former editor of Us Weekly and The Hollywood Reporter.

Kelly had a Colombo style -- low key, unobtrusive, just the facts. He turned out scoop after scoop and his reputation soared.

Along the way he married Irish nurse Patricia Walsh from Co. Kerry and they raised three sons.

He kept up his Irish interests, even scooping every other newspaper with an exclusive that the IRA was going to start hunger strikes in 1981.

That was typical Kelly -- eclectic, insightful with great sources even on an IRA story far from his usual beat. There won’t be too many like him again.