Joe Biden, like Tim Finnegan, rises from his Irish wake

Irish American Joe Biden pulled off what looked impossible, like his namesake from "Finnegan's Wake", the Democratic hopeful is back on top. 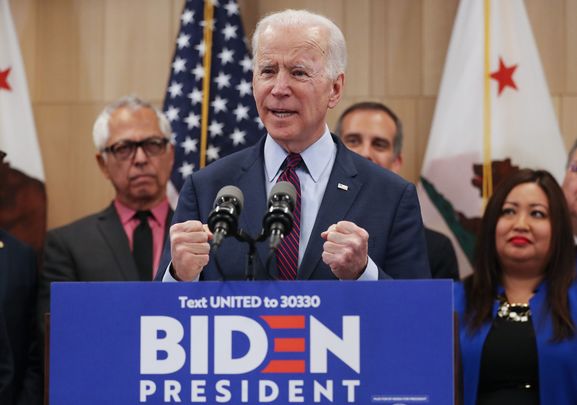 Irish American Joe Biden pulled off what looked impossible, like his namesake from "Finnegan's Wake", the Democratic hopeful is back on top.

A few weeks ago I wrote off Joe Biden's chances for the Democratic nomination and suggested the happy warrior of American politics ease into a well-deserved political retirement.

By so doing, I joined a not-so exclusive club led by hundreds of writers who completely wrote him off.

He was broke, had just finished fifth in New Hampshire, and a very distant second in Nevada. Let the wake begin.

I had looked at an NBC poll that Sunday morning showing him 20 points or so behind in national polls.

He seemed helpless, his cause seemed hopeless. Joe (Finnegan on his mother’s side) Biden, of course, did the exact opposite of what the entire media and political world expected and came roaring back in South Carolina and now on Super Tuesday.

Like his namesake Tim Finnegan in the famous Irish song “Finnegan’s Wake “Joe came back from the dead during his wake. In the song, it’s a bottle of whiskey, not Black votes in South Carolina that revives Tim.

“Tim revives! See how he rises!

Timothy risin' from the bed

Thunderin' Jaysus! Did ya think I wuz dead.”

At his victory speech Biden, who would be the second Irish Catholic president in history quoted Seamus Heaney’s Cure of Troy.

The longed-for tidal wave Of justice can rise up,

And hope and history rhyme.”

Suddenly, there was hope after South Carolina and then there was history on Super Tuesday, as he swept like a mighty wave across the country.

In the swirl and whirl of the massive weekend changes, one thing stood out. Joe Biden found his voice.

The halting and stammering debater was replaced by an incisive, deeply personal, and very moving politician who talked about decency and respect and pride in diversity, words you will never hear spoken in this White House.

I thought his best moment was reciting a Washington Post story about how kids are acting out, bullying other kids and insulting them and saying it was President Trump who inspired them.

Biden is the antithesis of that. He is a decent honorable and honest man. America is lucky to have him at this time.

Check out this video of Joe Biden visiting his ancestral home in 2016:

Do you think Joe Biden can succeed? Who'll be getting your vote come Nov 2020? Let us know in the comments section below.

Read more: Bernie Sanders is no friend of Hispanic or Irish immigrants